The lawsuits claim members of the self-labeled "Trump Train" violated the Ku Klux Klan Act of 1871. 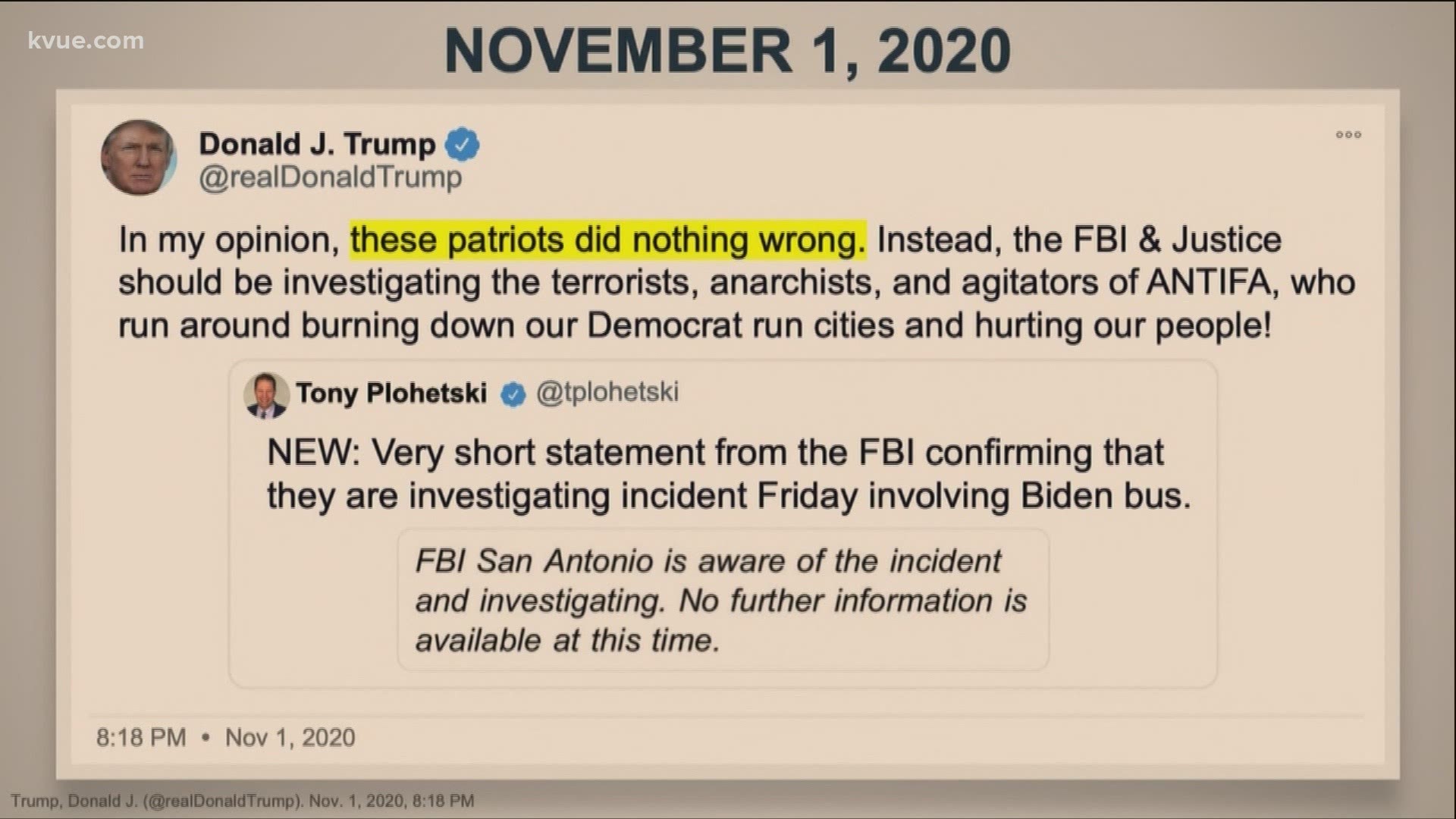 SAN MARCOS, Texas — Wendy Davis and a group of others have filed a lawsuit in relation to an incident that happened in San Marcos involving a group of supporters of former President Donald Trump and a Biden/Harris campaign bus last year.

In October 2020, organizers of a Democratic Party rally in Pflugerville had to cancel an event after they said their bus was harassed by a caravan of Trump supporters on their way to Central Texas. They said one campaign staffer's car was damaged in the incident.

At the time, the San Marcos Police Department was notified but due to the amount of traffic, police said they were not able to catch up to the bus before it left San Marcos jurisdiction.

Of the two lawsuits filed, one claims law enforcement failed to "protect and serve" despite repeated calls for help when a group of about 40 vehicles formed a self-labeled "Trump Train" to "terrorize" the campaign group.

This suit names San Marcos Police Chief Chase Stapp and two police officers as the defendants. The other suit names five members of the caravan by name, as well as a series of John and Jane Does.

The suits claim the incident was in violation of the Ku Klux Klan Act of 1871, which was passed to prevent groups from forming to obstruct free and fair elections by intimidating or injuring voters, or denying them the ability to engage in political speech.

According to the lawsuit documents obtained by KVUE on Thursday, members of the Biden-Harris campaign were intimidated and attacked on multiple stops along their tour in the days leading up to the San Marcos incident. Some of these alleged assailants reportedly displayed weapons and yelled death threats.

The lawsuit claims the San Marcos "ambush" was organized through local Trump Train groups in New Braunfels and San Antonio. It also claimed the group harassed the Biden-Harris bus for at least 90 minutes, forcing it to slow down to about 15-25 mph on a 70 mph highway. It claims members of the train swerved and drove in front of the bus to block its path.

"They played a madcap game of highway 'chicken,' coming within three to four inches of the bus," the lawsuit states. "They tried to run the bus off the road. The Trump Train live-streamed their behavior on social media, bragging about their aggressive driving, showing how dangerously close they were driving to the bus and its escorting vehicles, and openly speculating about who might be on the bus they were targeting — including, they hoped, then-Vice Presidential Candidate Kamala Harris."

The plaintiffs in this case also include Eric Cervini, David Gins and Timothy Holloway.

When reached for comment, SMPD stated that the City of San Marcos cannot comment on pending litigation.

Former President Trump commented on the incident not long after it occurred, stating "these patriots did nothing wrong."

'She liked to be where the party was' | River Walk mystery solved, owner claims pendant and confirms it contains her mother’s ashes