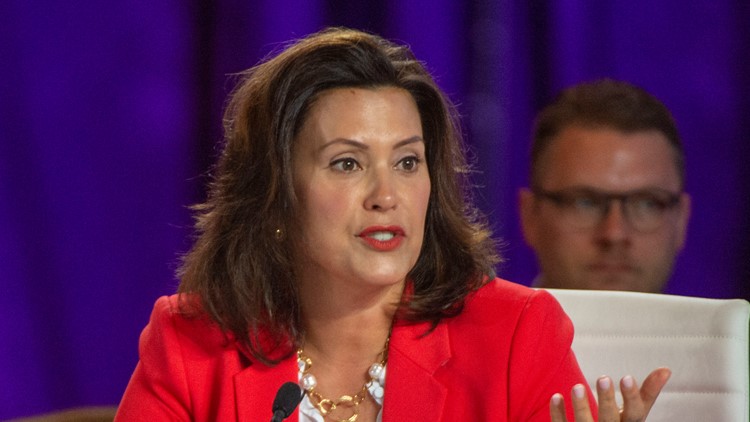 Photo by: AP
FILE - In this July 26, 2019, file photo, Michigan Gov. Gretchen Whitmer speaks during a session at the National Governor's Association conference in Salt Lake City. Five Democratic governors of states in the Great Lakes region want candidates in next year's presidential election, including President Trump, to back a plan for protecting their freshwater resources. Led by Whitmer, the governors on Monday, July 29, 2019, proposed a six-point platform that seeks increases in federal spending on water treatment infrastructure and environmental cleanups. (Rick Egan/The Salt Lake Tribune via AP, File)

During an impromptu interview with Movimiento Cosecha at the Democratic presidential debates in Detroit, Whitmer shared her support to making sure everyone, including undocumented immigrants, had identification.

“We need to ensure that everyone’s got a path to getting a license, so they’ve got identification,” the Democratic governor said in a video released by the group.

According to the Michigan Immigrant Rights Center, undocumented immigrants were able to obtain driver's licenses until 2008. Prior to 2008, the state issued driver’s licenses to anyone who could provide proof of their identity and their residency in Michigan, despite their immigration status. Former Attorney General Mike Cox, a Republican, reversed that decision in Dec. 2007, and ruled that undocumented immigrants could not be considered Michigan residents. The state has since considered legislation to challenge the current law, but no bill has been introduced in the current legislative session. Moviemento Cosecha has made #LicensesforAll a focal point of their activism.

Tiffany Brown, a spokesperson for Whitmer, confirmed on Friday the governor's position on the matter.

"The Governor supports a path for undocumented immigrants to get an identification and would support legislation to do so," Brown wrote in an e-mail.

Thirteen states and the District of Columbia allow undocumented immigrants to obtain driver's license's, according to the National Conference of State Legislatures.

According to the NCSL, proponents say that allowing undocumented immigrants to hold driver license's would increase revenue and increase trust between immigrants and police. Opponents have said the practice increase the risk of fraud and reduces the likelihood of immigrants following the proper channels to lawful residency.