A familiar face is among the 10 Democrats challenging U.S. Senator John Cornyn. MJ Hegar sat down with Ashley Goudeau to discuss her campaign. 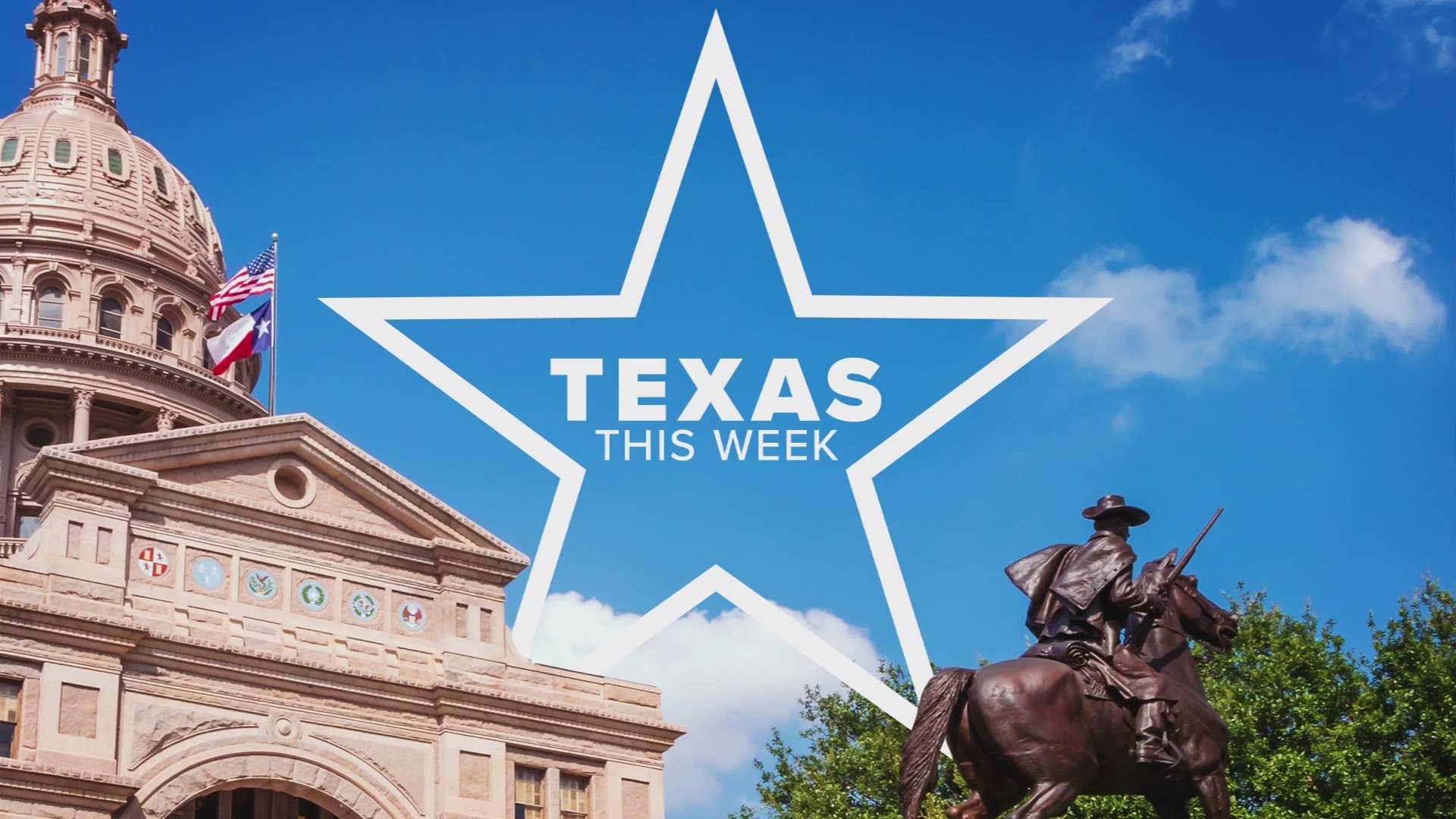 President Donald Trump arrived in Austin on Wednesday afternoon and was greeted by Lieutenant Governor Dan Patrick and Attorney General Ken Paxton. He headed to northwest Austin to tour the Flextronics facility with Apple CEO Tim Cook. At that facility, employees manufacture Apple's Mac Pro computers – something that was at risk of ending two months ago because of America's ongoing trade war with China and subsequent tariffs. The White House exempted Apple from those tariffs, so production will remain in Austin. President Trump said while he was on the campaign trail he envisioned Apple opening more plants in America – and now that's happening, which he said is proof America has the strongest economy in the world.

On the same day as the president's visit to Austin, 10 of the Democratic presidential candidates debated in Atlanta. They sparred over race relations, foreign policy and experience. Texan and former HUD Secretary Julian Castro is one of seven candidates who didn't make the cut to be on stage, but he's still confident he can win. He traveled to Atlanta to meet with community members and speak with political commentator Angela Rye.

Democratic debate: Candidates clash over 'Medicare for All'

Candidates have two weeks left to file to have their names on the ballot for the Texas primary – and after filing campaign paperwork earlier this week, former New York City Mayor Michael Bloomberg has now launched a Democratic presidential bid.

The Texas primary election is a little more than three months away and a familiar face is among the 10 Democrats running to challenge U.S. Senator John Cornyn. Combat veteran MJ Hegar previously ran for Congress and was narrowly defeated by the incumbent.

Hegar sat down with Ashley Goudeau to discuss why her sights are now set on the Senate.

Ashley Goudeau: For people who may not be familiar with you and your story, tell us a little bit about yourself and why you're running for the U.S. Senate.

MJ Hegar: "So, I grew up here. I went to Leander High School in North Austin. And, you know, I joined the military, I love this country, I kind of wanted to be Han Solo. I had a bit of an adrenaline addiction and wanted to be a combat pilot, which was a really difficult path. But I became one, I became a medivac helicopter pilot, did three tours in Afghanistan. And then when I got out of the military, I partnered with an organization to try to open jobs for women up for competition in the military. And the joint chiefs unanimously sided with us, and we were able to go to D.C. and build a broad coalition on the right and left about making our military stronger and making retention better and recruiting better. And I learned a lot about how D.C. worked. And as someone who put on the uniform and bled for our Constitution – I was shot down in my third tour in Afghanistan – it really kind of turned my stomach how D.C. works and how many corporate special interests and the influence of money and the lack of servant leaders – not that there aren't any, but there aren't many. And I noticed, especially with my representatives, that they were more interested in self-preservation and getting re-elected and getting campaign donations than they were in legislating for us and for the people who they represent. So, I'm running for Senate now because I took an oath to support and defend the Constitution against all enemies, foreign and domestic, and I believe our Constitution is under domestic threat now and I believe that we deserve better from our representatives."

Goudeau: In 2018, you ran for office in a historically red district against Congressman John Carter. While you were not successful in that campaign, you came very close. Why not run for the House? Why go for the Senate?

Hegar: "Plenty of people have pointed out to me [that] that would be easier. I often say, 'Have you met me?' I never take the easy road.' I believe that it is important that we unseat John Carter as well, still. I think that that's still important. But I thought the urgency was in getting Democrats control of the House, and I do feel like we helped with that. And we showed that that seat is not irretrievably impossible to win – there's plenty of people running for it now. Two of the state House seats in that district we helped flip, we ran coordinated campaigns with them. And I don't want to say that it's not urgent we unseat John Carter, but I didn't see it had to be me. I didn't see – I saw that it was very possible for someone else to unseat him. And as someone who has flown water missions to suppress wildfires, it's kind of in my nature to find the biggest bucket of water I can find and put out the biggest fire that I can find. I believe that I'm in a position to unseat John Cornyn, who is one of our U.S. senators, and that he is absolutely really bad for Texas and not working for Texan families."

Goudeau: Let's talk about some of the issues facing Texans. As you are well aware, this is the state with the highest rate of uninsured residents.

Hegar: "And children. It's so embarrassing."

Goudeau: Tell me how you want to begin to address this.

Hegar: "Well, there's so much that we can do and so much that we should do and so many of the decisions that are impacting this and that are causing kids to be uninsured and people to be uninsured in Texas are being made because of partisanship, which just turns my stomach, alright ... I would like everybody in Texas to have access to be able to be covered by Medicare. I think that all children should automatically qualify for Medicare. And that would take care of our, you know, children that are uninsured issue. And I think that we need to have a public option. We need to have Medicare available to everybody because I am also cognizant of protecting individual liberties and freedoms, that's something that's very important to Texas. And growing up in Texas, I know that we are a country and a state of choices and freedoms and so I think that we need to have people with the option to take the, what I consider, far superior product of Medicare. But I think that we should maintain the option for them to stay on private insurance, should they choose to."

Goudeau: Texas was home to some tragic shootings. We had El Paso. We had Odessa. And there is always this conversation when these things happen about what can we do to prevent these types of things from happening. What are your ideas on that?

Hegar: "There's so much we need to do. And John Cornyn cashed an NRA check two weeks after the El Paso shooting. A few days after the Midland-Odessa shooting, our Republican senators, all of them – well, I don't know if anyone was absent from that meeting, but a group of Republican senators went into a room to talk specifically about gun violence. We had two senators from Texas in that room. When they came out, they were asked, 'Where did you land on background checks?' and they said it didn't come up. Three days, three or four days after a shooting that happened that a universal background check would have stopped. Because the shooter failed a background check and then went to a private sale where he didn't need a background check to obtain his weapons. So, there's so much that needs to be done. I mentioned anti-trafficking. We absolutely have to end the sale of weapons of war to the public. I have used these weapons for their intended purpose in combat. As a combat veteran, I feel like I need a place at this table. We need more responsible gun owners and people that understand these weapons at the table to have these conversations. I understand the damage that they can do, I understand their intended purpose and they should not be in the hands of civilians. We need to obviously have universal background checks for every type of firearm sale. We need to fully fund the CDC to research the impact and the things that we can do to reduce violence, not only in technology but in policy. There's just so much that we need to do. I've called broadly for an end to open carry. As a responsible gun owner myself, but also as a mom, I don't understand the need for open carry. It does not infringe on our second amendment rights to not be allowed to walk around Pecan Street Festival with an automatic rifle strapped to your chest. When I saw that happening this last Pecan Street Festival, I had to pack my kids up and leave. You know, what about our rights? That's an assault on bystanders. It makes us feel unsafe and makes us not able to see something, say something and get help from law enforcement. So, there's a lot that needs to be done. None of it can be done while we have our current representatives in office."

This week, Ashley weighs in on the significance of the impeachment inquiry of President Trump.

Tomorrow’s ATX: What Austin-Bergstrom International Airport will look like in 2040

Suspect in custody after deadly shooting near Manor