Should a vacancy become available while President Trump is in office, his nominee will come from a previously announced list or the one announced on Wednesday. 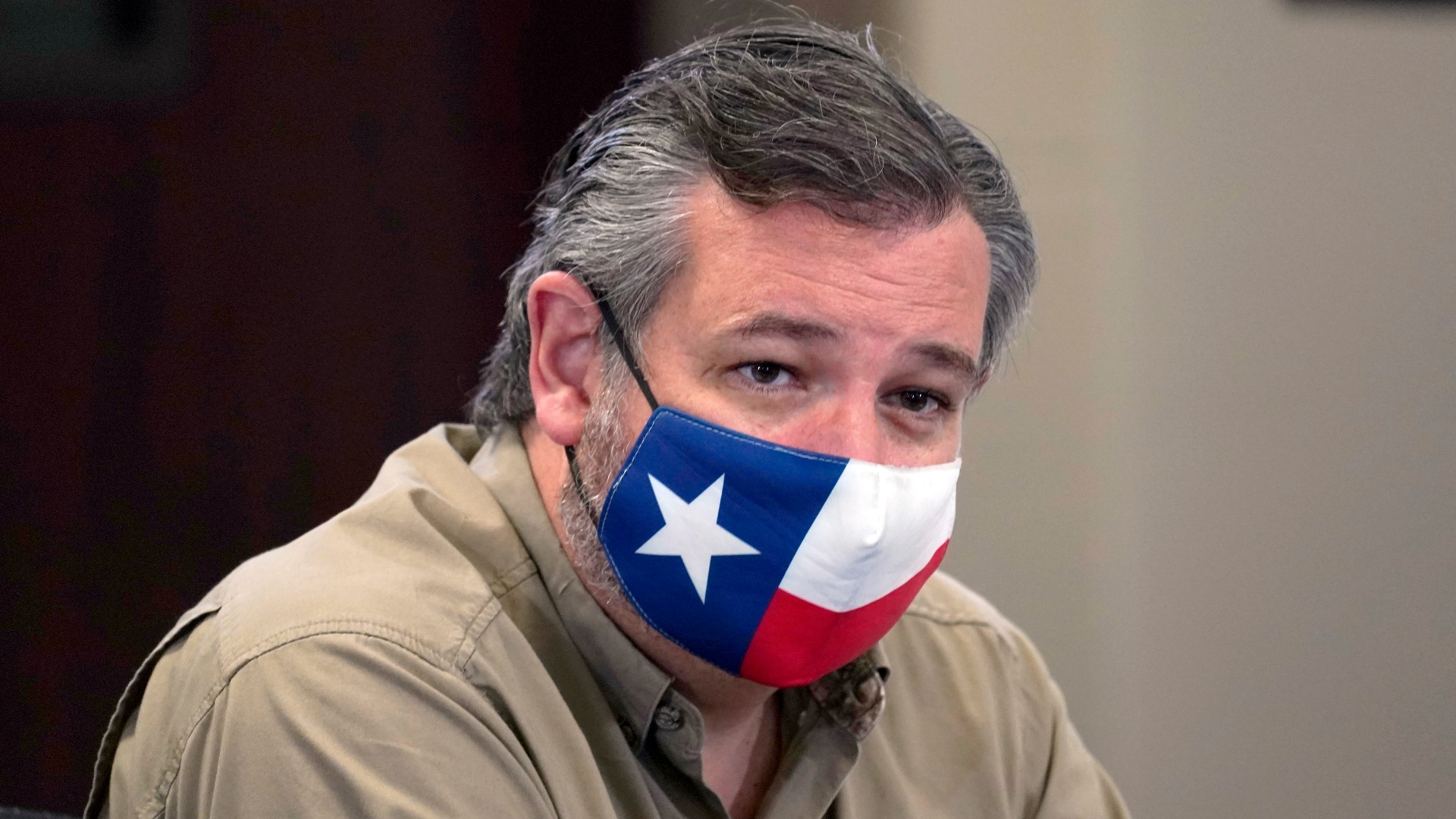 HOUSTON — Sen. Ted Cruz has been named as a possible Supreme Court nominee by President Donald Trump. Cruz is one of 20 nominees that Trump announced Wednesday. Trump said the 20 who were named Wednesday will be considered in addition to those named on a list he previously announced.

“I am grateful for the president’s confidence in me and for his leadership in nominating principled constitutionalists to the federal bench over the last four years. As a member of the Senate Judiciary Committee, I’ve been proud to help confirm to the bench over 200 of President Trump’s judicial nominees, including two to the Supreme Court. It's humbling and an immense honor to be considered for the Supreme Court. The High Court plays a unique role in defending our Constitution, and there is no greater responsibility in public service than to support and defend the Constitution of the United States. In the Senate, I have been blessed to lead the fight to preserve our constitutional liberties--every day, to defend the rights of 29 million Texans--and I look forward to continuing to do so for many years to come,” Cruz said after the announcement.

The list includes Cruz and Republican Sens. Tom Cotton of Arkansas, Christopher Landau, the current ambassador to Mexico, and Gregory Katsas, a Trump nominee to the U.S. Court of Appeals for the District of Columbia Circuit, among others.

“Every one of these individuals will ensure equal justice, equal treatment and equal rights for citizens of every race, color, religion and creed," Trump said at the White House. Trump also warned his Democratic rival, Joe Biden, would select “radical justices” who would “fundamentally transform America," even though Biden has never outlined his list of potential choices.

The move to release a list is a repeat of a successful strategy Trump employed during his 2016 campaign. Four years ago he took the unprecedented step of announcing potential Supreme Court nominees in a bid to win over conservatives and evangelicals who were not enthusiastic about his personal flaws but came around to his candidacy because of his promises on judicial appointments.

“The president is very excited to share who he would nominate to the Supreme Court," White House press secretary Kayleigh McEnany said ahead of the announcement. She said Trump “wants Constitution-abiding judges, he wants textualists who believe the words of a statute actually are what they are, not subject to interpretation.”

Trump had previously said on Twitter the announcement of a new list would come by Sept. 1 and that it “may include some, or many of those already on the list.”

The court’s oldest members are Justice Ruth Bader Ginsburg, 87, and Justice Stephen Breyer, 82, both liberals, and Justice Clarence Thomas, 72, and Justice Samuel Alito, 70, two conservatives. Ginsburg made news this summer when she announced she is being treated for a recurrence of cancer but has no plans to step down.

The high court is currently divided 5-4 between conservatives and liberals. While there is no current vacancy on the court, Ruth Bader Ginsburg, 87, has been undergoing cancer treatment, and three other members of the court are in their 70s and 80s.

Trump has already remade the federal bench for a generation. And any vacancy in the highest court would give the president the ability to shape its future for decades to come if he is re-elected in November.

Trump has stressed that power as he has campaigned, claiming that the winner of the upcoming presidential election “could have anywhere from two to four, to maybe even five” Supreme Court justices to pick, though that would require an extraordinary level of turnover.

“You will change this country around. It will be irreversible,” he said last month in Minnesota.

Trump released two lists with a total of 21 names of potential Supreme Court nominees during his previous presidential campaign and added another five names in 2017 after becoming president. Trump’s two nominees to the court, Justice Neil Gorsuch and Justice Brett Kavanaugh, were both drawn from Trump’s list.

Even in a race reshaped by the pandemic and the national reckoning over race, Trump's appointments of Justices Gorsuch and Kavanaugh remain among his crowning achievements and are frequently noted at his rallies.

The cultural battle over Kavanaugh’s confirmation, in particular, remains an electrifying moment for many on the right and one that Trump continues to highlight as he tries to replicate the excitement that the fight generated on the right and make the race an us-vs.-them battle over American values and cancel culture.

“Did you ever see anything like that? Justice Kavanaugh. People forget. You know, time goes by, they forget. We don’t forget. I don’t forget,” Trump told a rally crowd last month in New Hampshire. “They’re destroying the livelihoods of innocent people.”

For the president's allies, the list is seen as a way to excite his base as well as remind voters of what's at stake come November.

“I think it's a very important way for the president to reaffirm his commitment to an issue that many conservatives and Republicans see as a priority," said Leonard Leo, the longtime executive vice president of the conservative Federalist Society who participated in the Kavanaugh and Gorsuch confirmations. “This a great way to remind people pf the legacy he’s already established for himself in this area.”

Biden has promised to nominate a Black woman to the high court if given the chance. Biden, too, has said he’s working on a list of potential nominees, but the campaign has given no indication that it will release names before the November election. Democrats believe doing so would unnecessarily distract from Biden’s focus on Trump’s handling of the pandemic and the economy, while also giving the president and his allies fresh targets to attack.

“We are putting together a list of a group of African American women who are qualified and have the experience to be in the court. I am not going to release that until we go further down the line of vetting them as well,” Biden said in June.

Biden advisers acknowledge that the Supreme Court vacancy four years ago helped Trump with white evangelicals and some chamber-of-commerce Republicans who disliked the first-time candidate or were wary of his conservative credentials. This year, Biden’s team sees those same groups as less up for grabs. Many remain firmly with Trump, they reason, while others already have bailed on him and won’t be wooed back by another list of potential justices for a vacancy that doesn’t yet exist.

But Trump pushed back. He said that, apart from “matters of war and peace, the nomination of a Supreme Court justice is the most important decision an American president can make” and that, “For this reason, candidates for president owe the American people a specific list of individuals they’d consider for the United States Supreme Court."

Any list may also be meaningless. Either man’s ability to get any future choice on the court depends on having a majority in the Senate, which confirms nominees. Republicans currently hold 53 seats in the chamber to Democrats’ 45, with two independents who caucus with the Democrats.

Regardless of party, presidents tend to look for the same characteristics in potential Supreme Court picks. Stellar legal credentials are a must. All of the current justices attended Harvard or Yale law school, though Ginsburg left Harvard and graduated from Columbia. And they tend to be old enough to have a distinguished legal career but young enough to serve for decades. That generally means nominees are in their late 40s or 50s.