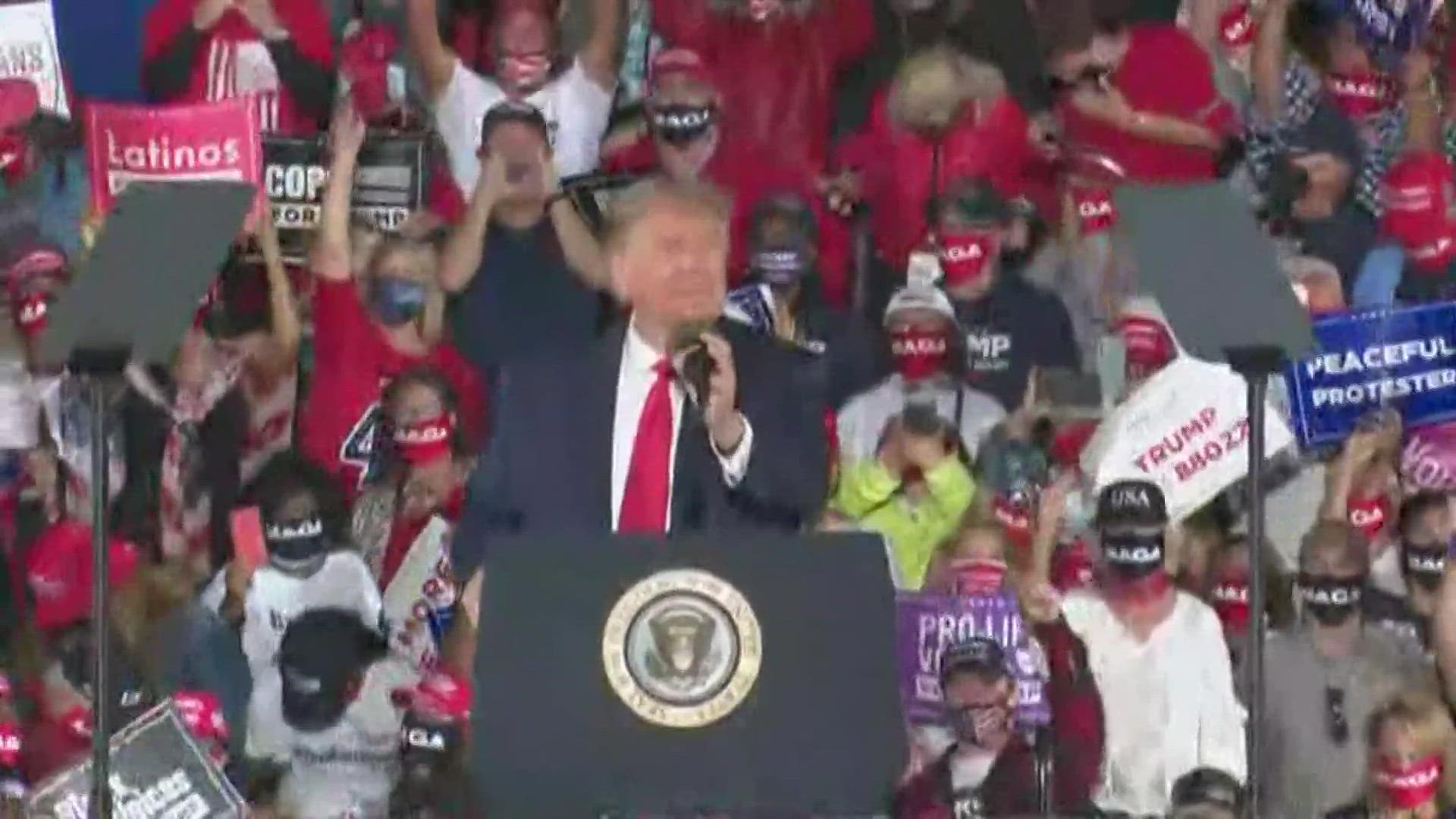 He spoke for just under two hours. The rally has concluded and you can rewatch it in its entirety on-demand below. He takes the stage around the 21-minute mark.

Friday's rally marked Trump's fourth time in Central Georgia since he formally announced he would be running for president in June 2015.

His first stop was in Nov. 2015 when he held a rally at the Macon Coliseum.

He then visited twice in 2018 -- once in October to survey damage left across the region by Hurricane Michael and then again in November to support Brian Kemp's campaign for governor.

Friday's Macon visit was also his first in the state of Georgia since testing positive and being subsequently hospitalized for COVID-19.

The crowd size at his rallies this week has drawn the ire of public health officials and local groups around the country.

One bipartisan nonprofit group, Rural America 2020, put up a digital billboard near the airport ahead of the rally calling it a 'Trump COVID Superspreader Event.'

Georgia Tech professor Joshua Weitz told GPB Macon that attendees should prepare for the rally knowing there is a near certain risk someone there will have COVID-19.

Michael Hokanson with the North Central Health District said they sent guidelines to the county to keep the rally safe for everyone.

A contract between Macon-Bibb County and the Trump campaign says that under Governor Kemp's executive order, people at the rally should maintain a six-foot distance from each other and that people are required to wear masks unless they can maintain that social distance.

The former vice president and current Democratic presidential nominee issued a statement regarding the rally as his supporters held their own 'Ridin with Biden' event.

"President Trump has continued to host events that disregard public health guidance, including his own CDC, and is now taking his disregard for COVID-19 to Macon, Georgia, where numbers are spiking yet again. Due to President Trump’s failed leadership, 7,500 Georgians have lost their lives to the coronavirus and nearly 200,000 remain unemployed, all while he threatens to take away protections from 4.4 million Georgians with pre-existing conditions.

As President, I will build our country back better and protect and expand the Affordable Care Act. I urge all Georgians to make your voices heard in this election."

Here's what you need to know about President Trump's Macon rally

'This is my 12th': Tennessee woman comes to Macon two days early for President Trump rally