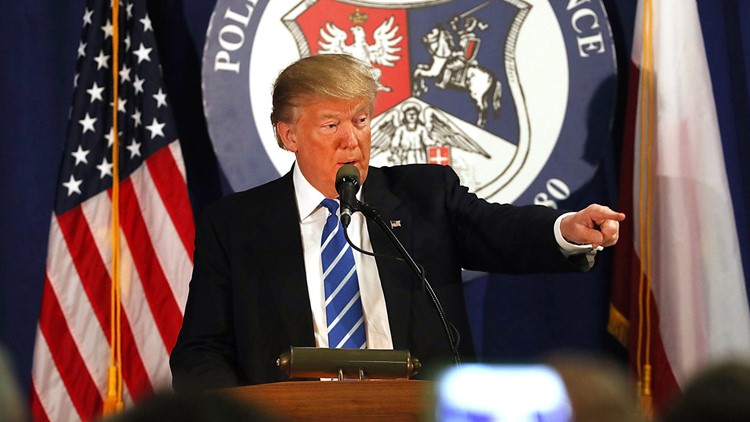 Trump claims he was 'holding back' in debate with Clinton

MELBOURNE, Fla. — Republican nominee for president Donald Trump told a fired-up crowd in Melbourne that he has the momentum for victory after what he said was a strong win in Monday's debate against Democrat Hillary Clinton.

MELBOURNE, Fla. — Republican nominee for president Donald Trump told a fired-up crowd in Melbourne that he has the momentum for victory after what he said was a strong win in Monday's debate against Democrat Hillary Clinton.

Trump said he won the debate, even though "I was holding back. I didn't want to embarrass her."

But Trump wasn't holding back during his hour-long speech Tuesday evening at the AeroMod International hangar at Orlando Melbourne International Airport.

Clinton "is as crooked as they come," Trump said, and everything she did "turned out bad."

"She is the candidate of yesterday, and ours is the campaign and the people of the future," Trump said. "She's an insider, fighting only for her donors and insiders. I'm an outsider fighting for you."

During his speech, Trump said Clinton was "incompetent as secretary of State."

And he said President Obama is "a president that doesn't know what the hell he's doing."

"Crooked Hillary is going to be worse than Obama, and we can't let it happen," Trump said.

In remarks that he has repeated often on the campaign trail, Trump promised that he would "build the wall" to prevent illegal immigration into the United States from Mexico, and that Mexico would pay for it.

The audience — which Melbourne Police Chief Steve Mimbs estimated was about 8,500 inside the hangar — frequently interrupted the speech with cheering and chants of "U-S-A."

Titusville resident Al Davis, a retired Navy master chief petty officer, said Trump was "on target" in his speech, which he felt wasn't as much the case in Monday's debate.

"He hit the high points" in the speech, Davis said.

"I'm very excited" to see Trump, Venticinque said. "I like how he gets everybody all excited."

And she said she would work to encourage others to vote for Trump, something Trump said is important for his victory on Nov. 8.

Both nationally and in Florida, polls show that the race is extremely close.

Trump said voters "have one magnificent chance" to elect him, instead of Clinton, and to "show the world that America is back.'"

In his speech, Trump painted a gloomy picture of the current America, with rising homicide rates in large cities and "Third World airports."

"We must never stop fighting to keep the American dream alive," Trump said. "We're going to fix our country. Fixing things is what I do."

"We will rebuild our country, and we will put a lot of people to work," Trump said.

Trump also said he would take on the "corrupt corporate media. They are as corrupt as you get."

"I will fight for you, and I will win for you," Trump said as he was nearing the end of his speech. "And our country will start winning again. We will make America great again."