Inside Texas Politics: Health care workers will be first in line for 1.4 million doses of vaccines

The first shipment of 200,000 doses is expected to arrive in the coming weeks and will likely go first to health care workers. 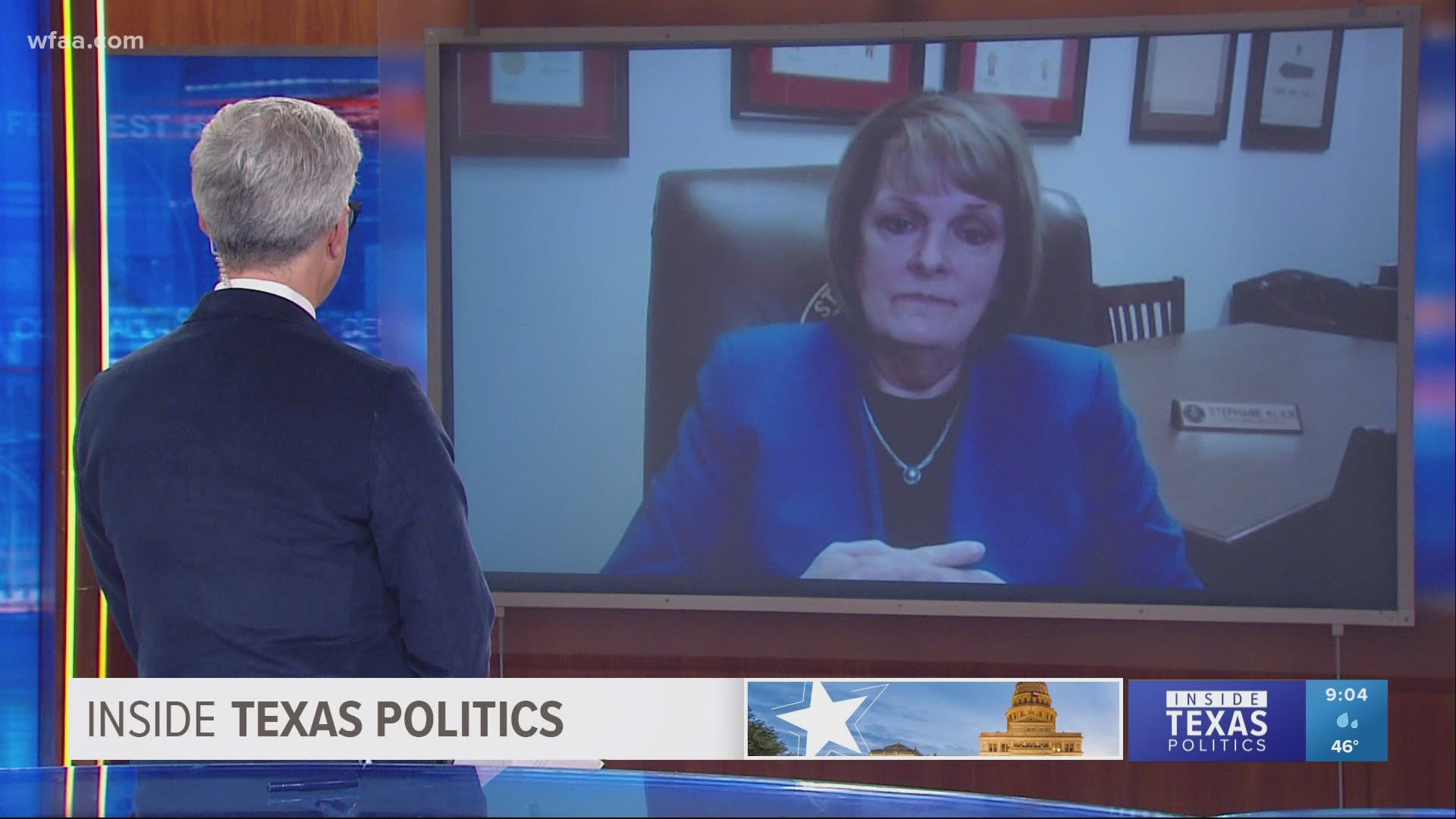 If the Food and Drug Administration approves a COVID-19 vaccine from Pfizer, Texas will get about 1.4 million doses this month.

The first shipment of 200,000 doses is expected to arrive in the coming weeks and will likely go first to health care workers.

"it will be health care workers that have a high risk of exposure," said state Rep. Stephanie Klick, who is a member of the COVID-19 Expert Vaccine Allocation Panel.

RELATED: Who is making the potential COVID-19 vaccine? When will it get to Texas? Answering 6 distribution questions

Klick said it's unclear yet when Texas might get doses of a second vaccine that has requested approval from the FDA. But, she said, the priority is ensuring there are medical workers to care for coronavirus patients.

The review is not for full FDA approval but is instead for an emergency use authorization.

Watch this week's entire episode of Inside Texas Politics below:

But, Texas Attorney General Ken Paxton says the position was created illegally because the Secretary of State wasn't properly notified of the appointment.

"I appreciate Ken Paxton holding us accountable. We crossed all our t's and dotted all our i's," Longoria said.

She said her appointment has "all been above board."

Early voting begins next week in the runoff election between the Dallas salon owner who was jailed this year for reopening her business against the governor's orders and a state representative who has been endorsed by Gov. Greg Abbott.

Abbott announced this week that he is throwing his support behind state Rep. Drew Springer in his race with fellow Republican Shelley Luther.

Travis County GOP Chair Matt Mackowiak says Abbott has known Springer and worked with him before on legislation.

"It's possible he's never met Shelley Luther," Mackowiak said of the governor. "What's interesting about her is she has almost no involvement in the Republican party that anyone can find."

Luther doesn't have a record of voting in a Republican primary in Texas before this year, Mackowiak said.

He said many candidates have looked to President Donald Trump as a way to break into politics without the experience, but there aren't many examples of success in those campaigns.

The Texas Tribune’s Abby Livingston, and Bud Kennedy, with the Fort-Worth Star-Telegram, are joined by Berna Dean Steptoe, WFAA’s political producer, to answer these questions.

1. Are there any Texans on President-elect Joe Biden's cabinet? If not, why not? Is that a mistake?

2. It's been a month now, and some Texas Republicans still don't call Joe Biden the president-elect. Why hold onto hope for some reversal? What's the political risk in say it's over? Barr says no widespread election fraud. Why won't Texas Republicans call him President-Elect Biden?