Inside Texas Politics: Texas mayors ask for federal help to 'rebuild our communities' 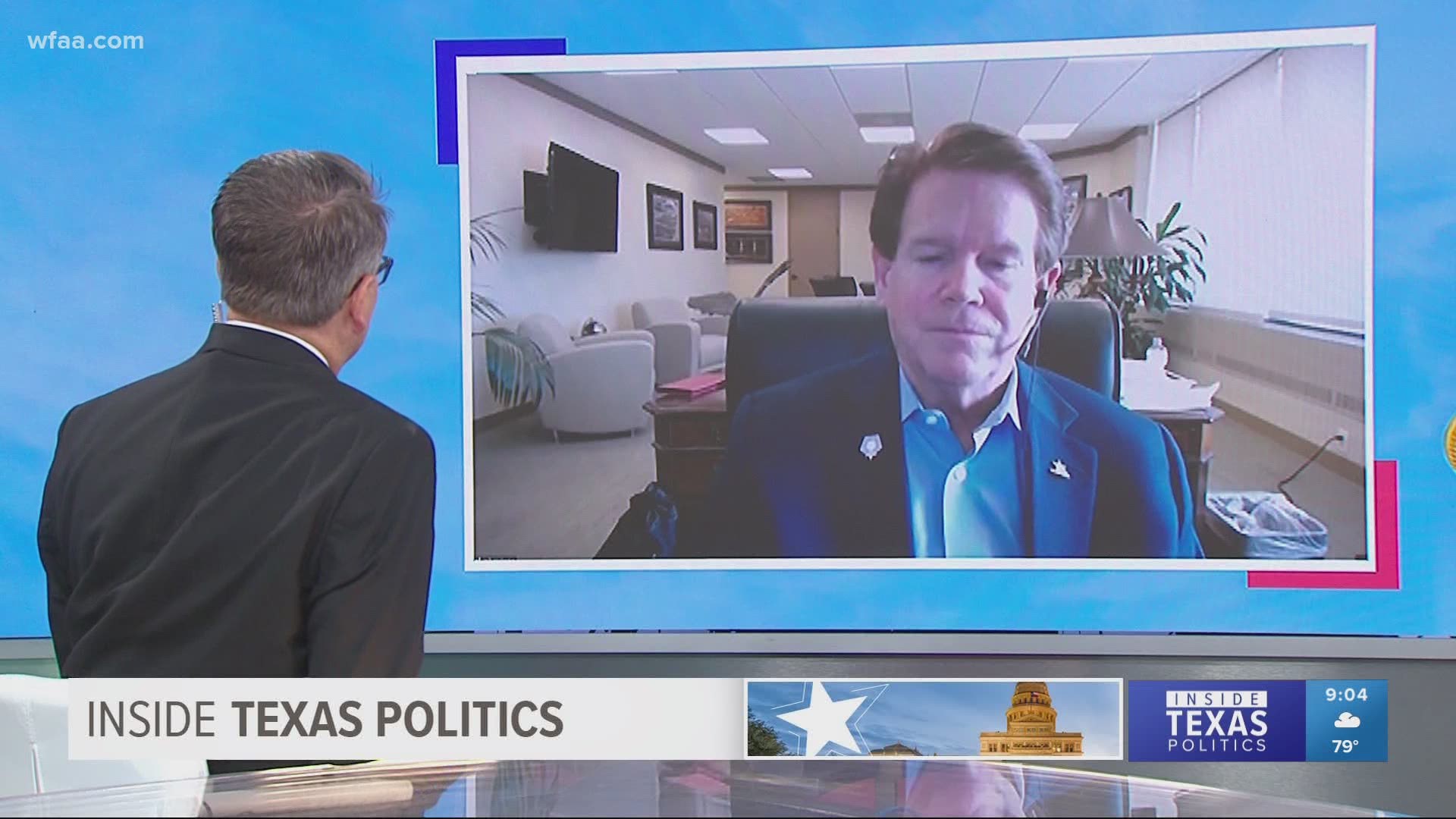 Nearly 100 Texas mayors, from large and small cities, signed a letter sent to every member of Congress from Texas, asking for help from the federal government.

“When these things hit, we need help for emergency and medical services, which we certainly received.  And then now we need money to be able to rebuild our communities so that we can be the true economic engine that this country needs right now,” Williams says.

Williams wrote a letter to send to the Texas Congressional delegation asking for desperately needed money.

“Most Texas cities are all looking at a major reduction in our property tax revenue because the property value is going down. Other states, it’s going to be their income tax going down because people aren’t able to work.  And so consequently, we are projecting that it’s going to be a $1.5 trillion reduction here over the course of this next year in losses here to cities across America," the Arlington mayor explained.

Williams says Arlington alone is currently facing a $20 million shortfall from March through September. Much of that has to do with having no summer baseball or students at the University of Texas at Arlington.

That alone is more than 40,000 people not spending money in the city.

There are no events at AT&T Stadium and Six Flags isn't in "full swing."

“I could go on. Shopping is at an all-time low. Our restaurants are doing less than anyone else. Our manufacturers have been crippled," Williams said.

He says if communities don't get economic relief, the recovery is going to take longer.

"And we’re not going to be as effective in helping our businesses and our families in recovering from this," he said.

Watch this week's entire episode of Inside Texas Politics below:

The Texas Tribune's Ross Ramsey joined Jason Whitely to discuss an issue that could affect every city in Texas. The Trump administration wants to leave undocumented immigrants out of the census count.

The Census is not about who and who is not a citizen – it is about how many people live in specific areas at a certain time. The problem for Texas is if everyone is not counted – that could cost Texas some of its power and influence in Congress.

1. Looks like the president is trying to use this to stoke his base -- and critics say this is not constitutional. Is this going to court?

2. There will be sports on some college campuses next month. Even football at UT Austin? Are health officials concerned?

Texas school districts are pushing back the start of classes. Will kids, especially the younger ones, be able to safely return to school this fall?

Dallas' COVID-19 Health and Healthcare Access Czar Kelvin Baggett says working parents could find themselves in a dilemma if they have nowhere to send their children.

Fort Bend County Judge KP George, who was born in India, tweeted a collage of hateful and racist messages he has received online in recent weeks.

He says he’s had enough of the online angry and racists comments coming from fellow Texans.

His message is simple: Call them out, stand up for your neighbors, your coworkers and your children's classmates.

1. The president’s campaign message seems to center on protests and civil unrest -- will that motivate Texas voters more than coronavirus? More than the economy? Federal SWAT teams are responding to protests in other cities, and the president is talking about sending in federal agents to control crime. How would Texas leaders or Texans respond?

2. Lawmakers return to the legislature in January; however, they will be inside Plexiglas boxes. Texas Comptroller Glenn Hegar says coronavirus has infected the state budget, and there will be big budget cuts. Where will cuts likely begin?