Powell served as Secretary of State in the Bush administration. 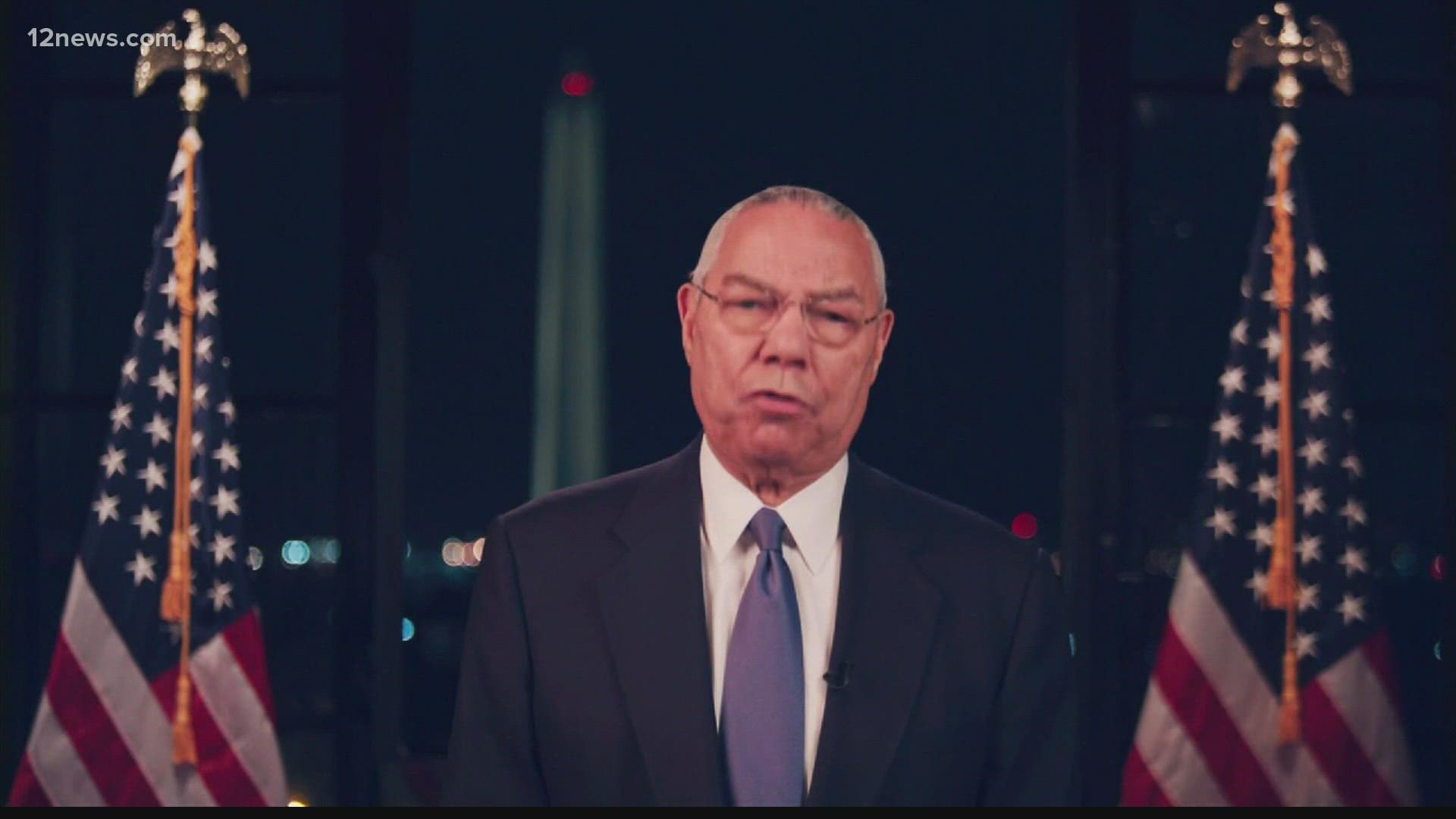 HOUSTON — Condolences are coming in from local and world leaders following the death of Gen. Colin Powell. Former President George W. Bush, for whom Powell served as Secretary of State, released the following statement.

"Laura and I are deeply saddened by the death of Colin Powell. He was a great public servant, starting with his time as a soldier during Vietnam. Many Presidents relied on General Powell’s counsel and experience. He was National Security Adviser under President Reagan, Chairman of the Joint Chiefs of Staff under my father and President Clinton, and Secretary of State during my Administration. He was such a favorite of Presidents that he earned the Presidential Medal of Freedom – twice. He was highly respected at home and abroad.  And most important, Colin was a family man and a friend. Laura and I send Alma and their children our sincere condolences as they remember the life of a great man."

Powell, who served Democratic and Republican presidents in war and peace but whose sterling reputation was forever stained when he went before the U.N. and made faulty claims to justify the U.S. war in Iraq, died of COVID-19 complications. He was 84.

More reaction to the passing of General Colin Powell

Below are more statements we've seen on the passing of General Powell.

This is a statement released by President Biden this morning.

"Jill and I are deeply saddened by the passing of our dear friend and a patriot of unmatched honor and dignity, General Colin Powell.

The son of immigrants, born in New York City, raised in Harlem and the South Bronx, a graduate of the City College of New York, he rose to the highest ranks of the United States military and to advise four presidents. He believed in the promise of America because he lived it. And he devoted much of his life to making that promise a reality for so many others.

As a Senator, I worked closely with him when he served as National Security Advisor, Chairman of the Joint Chiefs of Staff, and as Secretary of State. Over our many years working together – even in disagreement – Colin was always someone who gave you his best and treated you with respect.

Colin embodied the highest ideals of both warrior and diplomat. He was committed to our nation’s strength and security above all. Having fought in wars, he understood better than anyone that military might alone was not enough to maintain our peace and prosperity. From his front-seat view of history, advising presidents and shaping our nation’s policies, Colin led with his personal commitment to the democratic values that make our country strong. Time and again, he put country before self, before party, before all else—in uniform and out—and it earned him the universal respect of the American people.

Having repeatedly broken racial barriers, blazing a trail for others to follow in Federal Government service, Colin was committed throughout his life to investing in the next generation of leadership. Whether through his care for the women and men serving under his command and the diplomats he led, or through the work he shared with his wife Alma at the America’s Promise Alliance to lift up young people, or through his years leading the Eisenhower Fellowships, Colin’s leadership always included a focus on future.

Above all, Colin was my friend. Easy to share a laugh with. A trusted confidant in good and hard times. He could drive his Corvette Stingray like nobody’s business—something I learned firsthand on the race track when I was Vice President. And I am forever grateful for his support of my candidacy for president and for our shared battle for the soul of the nation. I will miss being able to call on his wisdom in the future.

Jill and I are sending all our love and strength to Alma, their children, Linda, Annemarie, and Michael, their grandchildren, and the entire Powell family. Our nation mourns with you.

Colin Powell was a good man.

He will be remembered as one of our great Americans."

Colin Powell was a soldier, General, National Security Advisor, Secretary of State. He was respected by people on both sides of the aisle, young and old. His life of service made us better and he was admired by so many. I am one. RIP. st

Saddened to learn of the loss of Gen. #ColinPowell. We've lost a true statesman, military leader, and hero. May God bless and comfort his family.

Today, the nation lost a man of undaunted courage and a champion of character. A statesman & trailblazer, devoted to America and the cause of liberty, Colin Powell’s legacy of service & honor will long inspire. Ann & I offer our love & sincere condolences to Alma and his family.