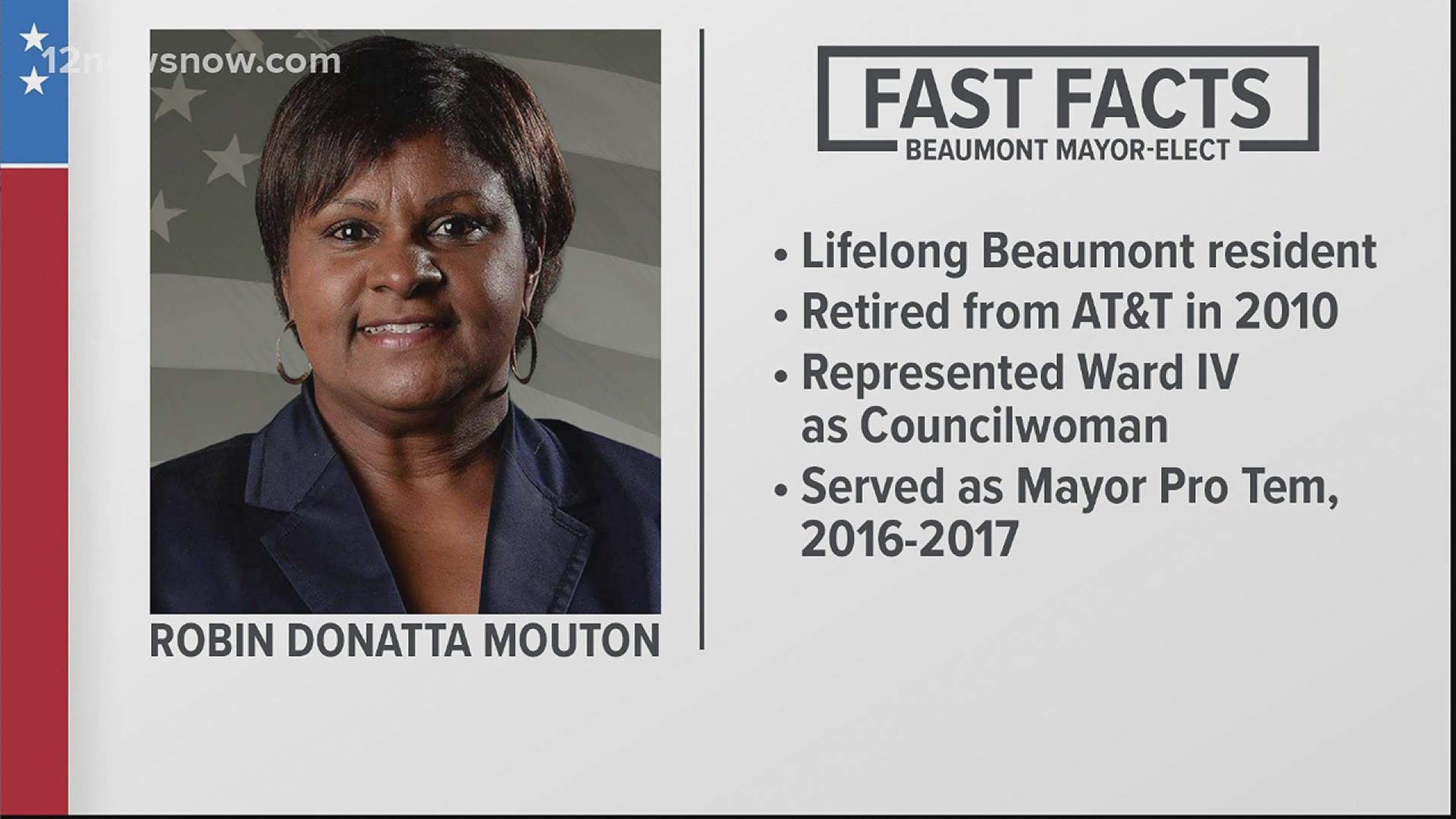 BEAUMONT, Texas — The voters have spoken and the City of Beaumont has chosen its first new mayor since 2007.

With nearly 52% of the vote Robin Mouton will become the next mayor of Beaumont.

The polls closed at 7 p.m. following a day of runoff voting that did not seem to be too affected by the hot weather or the Juneteenth Holiday.

Less than two minutes before the polls were officially closed early returns were released showing Mouton leading West by only 201 votes.

The second batch of results were released at  8:10 p.m. and showed Mouton moving ahead to nearly a 6% lead over West.

Candidates Mouton and West were facing off to see who would take over Becky Ames' long-held spot as Beaumont mayor.

With less than an hour until the polls close, both candidates visited to polling sites across the city, and despite the holiday and extreme heat people are coming out to vote.

During the general municipal election in May 13,757 votes were cast in the race for Beaumont's mayor.

During campaigning Mouton had addressed the issue of flood mitigation and the city's aging infrastructure.

In West’s campaign he said he was looking for ways to grow the city’s population and become more transparent about issues impacting residents.

Both candidates have been impressed with the turnout.

"It has been great race,” Mouton said on Saturday.  “I have enjoyed going around the city meeting the citizens, and I look forward to 7 p.m., tonight in the final stretch of it. Most importantly, just get out and vote.”

Mouton planned on being surrounded by family and friends as the results came in.

“The end is near and I know people are experiencing a lot of voter fatigue,” West said on Saturday. “It has been a long election season, and I appreciate them being consistent and continuing to show up. I think this is going to be a record turnout. It is certainly exceeding what the general election had.”

Like Mouton, West also hosted a watch party surrounded by family and supporters.

This will be the first new mayor the city will have since Mayor Becky Ames took office 14 years ago.

The polls have closed following a day of runoff voting in the Beaumont mayoral election and residents are close to finding out who will be the first new mayor in the city since 2007.

The second batch of results released at about 8:10 p.m. have Robin Mouton moving ahead with almost 52% of the vote.

Candidates Mouton and West were facing off to see who will take over Becky Ames' long-held spot as Beaumont mayor.

Outgoing Mayor Becky Ames has been in the city leader position since 2007.

Ames said she hopes the next leaders will be able to take her foundation forward and continue to make Beaumont better.

Mayor Ames said she is thankful for this opportunity to serve the city.

Early voting ended June 15, and both candidates said they did everything they could to get voters to the polls.

"We wanted to encourage folks to get out and vote. This is a runoff election that's really important. It's going to be a new mayor for the first time in 14 years here in Beaumont," West said.

West said during his race one of the things he is highlighting is sewage.

“We need more transparency and better communication on how we are doing on sewer repair,” he said.

Mouton has focused on hurricane season.

“We have to get a flood mitigation plan in place," she said. "I want to build some readiness and preparation for our weather conditions because we live in Southeast Texas.”