Nicole Minkin Lissenden thought she had a prowler. That prowler turned out to be a bear -- and it got stuck in her minivan. 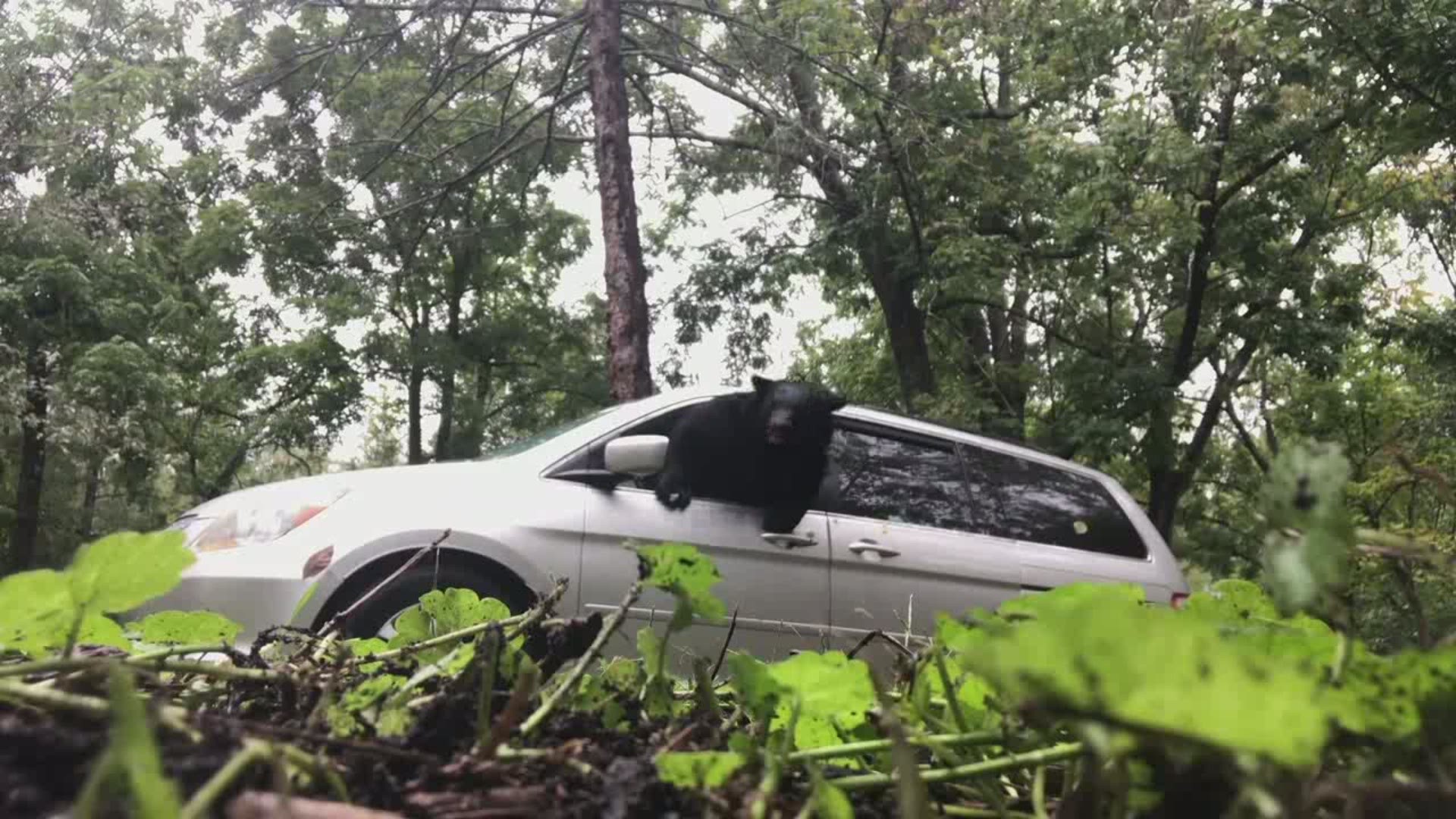 When a friend stopped by to tell Nicole Minkin Lissenden that her van door was open and some trash was on the ground next to it, she thought it was odd.

"We were up at my parents' house on Beaverdam Road — they were out of town — and the (van) doors were closed but unlocked. All the doors were closed," Lissenden said of her 2008 Honda Odyssey. "I went up and looked and I was like, 'Oh, that's embarrassing."

One door had come ajar and trash was nearby, but she didn't think much of it and closed the door. It was Sunday afternoon, about 2:30 — not a time you'd expect a prowler to be at work.

"I certainly didn’t think it was in the car, so I closed the door at that point and went back inside," Lissenden said. "About 30 minutes later, I went back out to get something out of the car, and I noticed all the windows were fogged up and there were paw prints on the windows."

In this case, the prowler turned out to be a good-sized black bear. Such incidents have become more common in the Asheville area in recent years, as the bear population grows and some bears have figured out how to open vehicle doors.

In this case, Lissenden had unwittingly trapped the bear in her vehicle when she shut the door.

It was not a happy bear.

"The bear was getting more and more upset and thrashing around a lot, and that set off the alarm and started honking the horn," Lissenden said.

She had called her husband, Alex Lissenden, as well as Animal Services, to come over. The Lissendens, who have two small children, live in Arden.

A neighbor, Buster Brown, also came over to help.

First, Alex Lissenden tried to open the sliding door by remote control, but the bear had damaged the door and it wouldn't work.

"So my husband had to go up and unlock the windows on the doors," Nicole Lissenden said.

He and Brown also tried opening the door to let the bear out, but it kept closing. The driver's side window had come down a smidgen, though, and that's all the bear needed.

"He got his claws around it and popped it out," Nicole Lissenden said. "He was penned up in there until windows cracked."

The bear casually slid out of the driver's side window and sauntered off. But not before leaving behind a lot of damage.

"He tore all of the kids' car seats out and tore up the seats to the car," Nicole Lissenden said. "He was just thrashing and clawing trying to get out of that van."

An insurance agent is coming out Thursday to assess the damage, but she suspects the vehicle is totaled.

He was headed to the Brown's house next door.

Buster Brown's wife, Karen Brown, picks up the story from here. She had heard all the van honking and went outside to investigate.

When the bear busted out the window and ambled off, she thought that was the end of the story. But when the Browns returned to their house, they saw bear paw prints in the kitchen and several drawers open.

"The bear went into our house and into our kitchen," Karen Brown said. "He went through three drawers and then pulled out some muffin mix. Then he went into the garage to eat it."

Oddly enough, the bear had walked right past freshly baked pumpkin bread on the counter and a pot of chili on the stove.

Karen Brown said they're careful to not leave trash out or otherwise entice bears, as they spot them frequently.

In this case, Brown and her husband were able to get the bear to leave by hollering at it.

The mountains of North Carolina have about 6,000 bears roaming around, including about 150 in Asheville's city limits, and interactions between them and humans have become more common, particularly as more people move to the area and bears recognize that human trash and bird feeders make excellent food sources.

"We have got a lot of bears out there who are very comfortable being around people in Asheville," Mike Carraway, a wildlife biologist with the North Carolina Wildlife Resources Commission, said in May.

Bears are not any more prevalent or aggressive this year than in other years, Carraway said then, but they are smart animals that quickly make associations with food.

In May of 2017, after a bear destroyed the interior of a Toyota Prius in Asheville, Carraway noted that some bears are "are smarter than the average bear, you might say."

"And we have had a number of occasions where bears learned to open car doors," he said. "Sometimes, they smell something in the car, so don't leave anything food-related in the car, even it's a discarded fast food package."

Lissenden said she's not aware of any particular food item she or her kids left in the van, but her daughter is 2 and her son is 6, so...

"You can never tell what's in there," she said with a laugh.

She and her husband live in Arden and rarely see bears, so Lissenden said she thought a vehicle with closed doors would've been just fine.

But in the wake of this incident, she stressed that she'll be locking the doors from here on out.