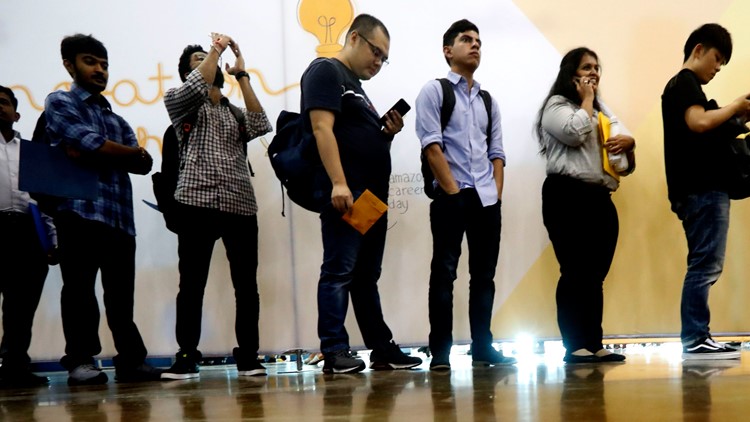 Photo by: AP
In this Sept. 17, 2019, photo job seekers line up to speak to recruiters during an Amazon job fair in Dallas. (AP Photo/LM Otero)

WASHINGTON — Hiring in the United States has jumped last month as employers added a robust 225,000 jobs, bolstering an economy that faces threats from China’s viral outbreak, an ongoing trade war and struggles at Boeing.

A half-million people streamed into the job market, although not all of them found work. That influx meant that more people were counted as unemployed, and it boosted the jobless rate to 3.6 percent from a half-century low of 3.5 percent.

The U.S. Bureau of Labor and Statistics new report for January 2020 said notable job gains happened in construction, in health care, and transportation and warehousing.

The report showed that the number of long-term unemployment and the number of people working part-time remained the same in January.

The job gains help President Trump's arguments about the United States economy thriving. During his State of the Union address on Tuesday, he said in the three years he has been in office, 3.5 million working-age people joined the workforce, which is true.

RELATED: VERIFY: Fact-checking Trump's 2020 State of the Union address and the Democratic response

He also said the median household income is now at the highest rate ever. The United States Census Bureau backed this claim.

The President also said that the unemployment rates for African-Americans, Hispanic-Americans, Asian-Americans, and women have reached the lowest levels in history, which is also true.

RELATED: Many youths think high school diploma is enough to get a good job, poll finds