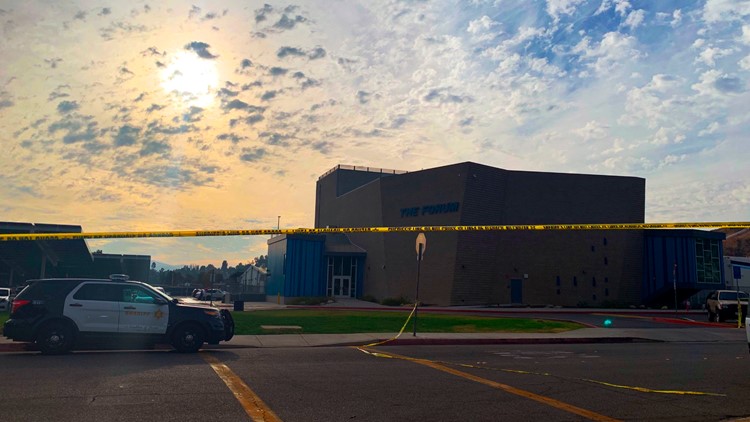 Photo by: AP
The sun begins to set over Saugus High School in Santa Clarita, Calif., late Thursday afternoon, Nov. 1, 2019, after a shooting incident there that morning. Authorities said a 16-year-old student shot five students, then himself. (AP Photo/Natalie Rice)

Update. According to the L.A. County Sheriff, the suspect died at 3:32 p.m. on Friday.

“This is a tough day when you think about it,” said Los Angeles County Sheriff Alex Villanueva on Friday.

It's the first day that the Santa Clarita community woke up realizing that Thursday's nightmare was reality.

The day before, a Saugus High School student walked into the campus quad, pulled a .45 caliber semiautomatic pistol from his backpack and shot five classmates, two fatally, then shot himself in the head on his 16th birthday.

“Grab your kid,” said Villanueva. “Hold them a little tighter.”

At noon on Friday,  Villanueva held a news conference to give an update on the investigation into Thursday's fatal shooting.

Initially, Villanueva said the family of one of the victim's, 15-year-old Grace Muehlberger, agreed to release her identity publicly on Friday morning.

The 14-year-old boy who died was later identified as Dominic Blackwell. One of his friends and former youth football teammates posted a team photo on Twitter and wrote,"Today a lil guy with a big heart lost his life in the Saugus shooting. He was always smiling making people laugh always positive. He was the sweetest kid ever and such a good kid. We need more people like you.''

The other three victims' families are still reaching out to other relatives and have not agreed to release their names to the public yet.

During Friday's press conference, Villanueva cleared up some rumors circulating around the investigation. For example, many wondered about an Instagram account that called out Saugus High School by name in its bio.

“After working with Facebook overnight, we have determined that the account was not linked to the subject,” said Captain Kent Wagner of the sheriff's homicide unit.

Wagner believes the social media account originated out of the country and says that part of the investigation is ongoing.

When investigators searched the suspect's home, they didn’t find a manifesto, suicide note or letters that mentioned a motive, according to Wagner.

However, there's still more to learn about the murder weapon. The Los Angeles Sheriff’s crime lab and ATF are analyzing the weapon. According to Villanueva, the suspect fired approximately six rounds.

Villanueva said the 16-year-old suspect’s father, who passed away a few years ago, had six guns registered in his name. However, none of those are believed to be the murder weapon that killed two students on Friday.

“ATF traced six firearms, which all had been accounted for,” said Carlos Canino from the Los Angeles field division of ATF.

“There were several firearms recovered at the house, however, those are not the ones registered to the [deceased] father,” said Villanueva. “Some of the weapons weren’t registered at all.”

While investigators are still looking for a specific motive, Villanueva believes that based on the evidence, this was planned. However, Villanueva doesn't believe the suspect's mother was aware of her son's violent plans when she dropped him off at school Thursday morning, or that he had a gun in his backpack.

“We knew it was a planned attack,” said Villanueva. “He knew how many rounds he had. He seemed very familiar with firing the weapon.”

Per California state law, Villanueva isn't releasing the suspect's name yet because he's a minor. As of Friday at noon, he is still in critical condition.

Marsha McLean, Mayor of Santa Clarita, also spoke at Friday's press conference. She announced that the city will host "a healing gathering" and candlelight vigil on Sunday at 7 p.m. at Central Park. She asks that people do not bring their own candle, as blue and white candles will be provided at the event.

She also announced that the city is creating a website that she expects to launch later on Friday.

All schools in the William S. Hart Union High School District will be closed Friday and counseling is available to staff and students.

"Out of respect for the victims and their families, all Hart district schools will be closed [today]... and district counselors and support provided by neighboring districts will be available to students and staff... [today] from 8 a.m. to 4 p.m. at Grace Baptist Church located at 22833 Copper Hill Drive," Mike Kuhlman, deputy superintendent of the Hart district said.

The shooting, which occurred about 7:40 a.m. Thursday at the school at 21900 Centurian Way, lasted just 16 seconds and sent students scrambling for cover -- some fleeing from the campus and others barricading themselves inside classrooms or offices.

Sheriff's deputies responding to the school found six people in the campus quad suffering from gunshot wounds. One of them was later determined to be the suspect.

Wagner said detectives reviewed security video that shows the gunman reach into his backpack, pull out the gun and open fire. The weapon, which had no bullets remaining, was recovered at the scene. It's still unknown what the relationship is between the murder weapon and the suspect.

Wagner said the shooting appeared to be completely random, with the gunman firing at anyone in his vicinity. Paul Delacourt, assistant director in charge of the FBI's Los Angeles field office, said there was no early indication the suspect "was acting on behalf of any group or ideology."

Officials also said there is no history of being bullied associated with the teen.

Of the five victims who were shot by the suspect, a 15-year-old girl and a 14-year-old boy, died at Henry Mayo Hospital in Valencia. The boy was a nephew of an LASD employee, Villanueva said in an interview.

The two injured girls were being treated at Providence Holy Cross Medical Center in Mission Hills. In a news conference Friday morning, doctors said they are both recovering from their injuries and are expected to be released from the hospital in one or two days.

A doctor at the hospital told reporters the 14-year-old was shot in the shoulder and the abdomen and was in stable condition and "doing well."

The 15-year-old girl had a single bullet wound that entered below her belly button and lodged in her left hip. Doctors performed surgery and were able to remove the bullet, another doctor said.

"A remarkable experience, being with 14-, 15-year-old survivors, that are consoling you, not the other way around," Newsom told reporters. "They had this remarkable resilience, smiles on their face, one just coming out of surgery, the other one with two gunshot wounds and just remarkably blessed that they are alive, their families with them."

Newsom called the spirit of the wounded students "amazing."

Hospital and sheriff's officials refused to confirm that the remaining patient at Henry Mayo is the shooting suspect, but that person is a male listed in critical condition.

Sheriff's deputies swarmed the Saugus High School campus in response to the shooting, and fanned out through the neighborhood, initially uncertain whether a shooter was still at large.

Villanueva noted that three off-duty law enforcement officers -- one with the sheriff's department and officers from Inglewood and Los Angeles -- were the first people on scene because they have children who attend the school.

After learning the suspect's name by interviewing eyewitnesses and reviewing surveillance video, deputies went to his family's home in the 22900 block of Sycamore Creek Drive and conducted an initial search to ensure there were no additional victims there, but none were found. Villanueva later said the teen's mother and girlfriend were being interviewed by detectives.

"Today was his 16th birthday," Villanueva told CBS Los Angeles. "(He) was involved in student athletics, so doesn't fit the bill of someone you would associate with this type of event."

A cross-country teammate of suspect's was shocked he could be capable of such a violent act.

"He was such the nicest person [...] I don't know why he would ever do this, especially on his birthday," the teammate told reporters.

Neighbors told reporters the family was mostly quiet, noting that the teen's father had died two years ago, possibly from a heart attack.

After the shooting, the high school and all other schools in the William S. Hart Union High School District were placed on lockdown as a precaution, along with two neighboring elementary schools, as deputies searched for a possible suspect. All lockdowns were lifted by mid-morning.

The students participated in an active shooter drill just a few weeks ago.

One female student told reporters after the shooting she heard the first gunshot and thought it was a balloon popping.

"The second and the third one is when everyone knew ... it was gunfire," she said, adding that students began scrambling for cover.

"I felt like I was running for my life," she said. "... At that moment I just prayed and prayed that everyone was OK and safe."

The girl said students had not heard of potential threats targeting the campus.

"We never heard of any threats or any problems," she said. "This just suddenly happened. Yesterday was a normal day, and now we're here getting evacuated from our school."

President Donald Trump wrote on his Twitter page Thursday afternoon, "We continue to monitor the terrible events at Saugus High School in Santa Clarita, California, through our ongoing communications with local, state and federal authorities. We send our deepest condolences to the families and friends of those tragically lost, and we pray for the speedy recovery of the wounded."

In response to the shooting, police patrols were stepped up at some other Southland school districts. Los Angeles, Long Beach and La Verne police were among the agencies announcing increased patrols.

A prayer vigil was held at Grace Baptist Church and a community prayer service was held at St. Stephen's Episcopal Church, both in Santa Clarita.

As of Friday at noon, investigators have interviewed about 40 people so far, according to Villanueva.