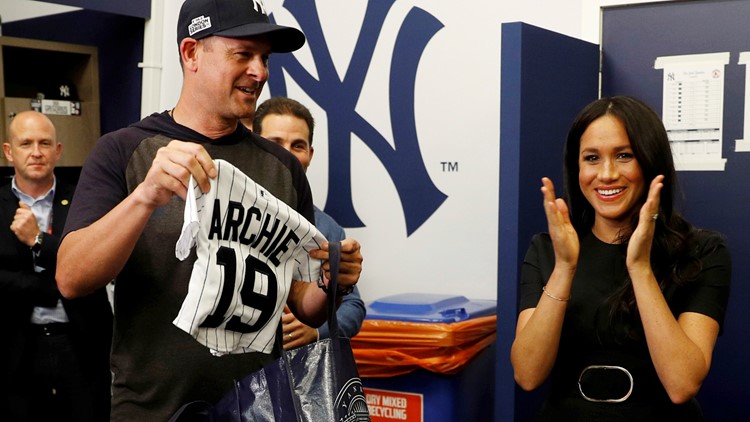 Photo by: AP
Britain's Prince Harry and Meghan, Duchess of Sussex receive a present for baby Archie as they meet players of the New York Yankees before a match against the Boston Red Sox in London, Saturday June 29, 2019. (Peter Nicholls/Pool via AP)

LONDON, UK — Rest assured, British fans: Most baseball games are not like this, not even the crazy ones between the New York Yankees and the Boston Red Sox.

Major League Baseball arrived in Europe on Saturday night with Ye Olde Slugfest. Each team scored six runs in a first inning that stretched nearly an hour, with Aaron Hicks hitting the first European homer. Brett Gardner had a tiebreaking, two-run drive in the third, Aaron Judge went deep to cap a six-run fourth and the Yankees outlasted their rivals 17-13.

Before a sellout crowd of 59,659 at Olympic Stadium that included fans from Britain, Beantown and the Big Apple plus royalty, batters behaved like good tourists and minded the gaps — and the fences. As a Union Jack fluttered above center field along with the Stars and Stripes, both teams jacked and jacked and jacked.

Prince Harry and wife Meghan, the Duchess of Sussex, took part in the ceremonial first pitch. The couple left month-old son Archie home as Meghan made one of her few public appearances since giving birth.

Before the game, the Yankees and Red Sox each gave the couple tiny jerseys for Archie.

Later, they strolled to the mound at London Stadium along with 10 participants in the Invictus Games, an international project started by Harry to give wounded military men and women a chance to compete.

Harry did not address the crowd — or risk throwing the first pitch and having it land in the dirt. He instead ceded honors to Invictus veterans, who performed credibly.

Meghan wore a simple black dress and skipped the spiky heels she sometimes favors for her walk on the infield dirt (brought from the U.S.) and artificial turf (from France.) Harry wore black slacks and a matching shirt.

They chatted with pitchers CC Sabathia of the Yankees and Chris Sale of the Red Sox during the ceremony.

New York, which began the day seven games ahead of second-place Tampa Bay in the AL East, won for the 12th time in 13 games and reached the halfway point at 53-28, one fewer win than last year. The defending champion Red Sox dropped a season-high 10 games back at 44-39.