Prosecutors have lined up multiple female accusers and cooperating former associates who have never spoken publicly before about their experiences with Kelly. 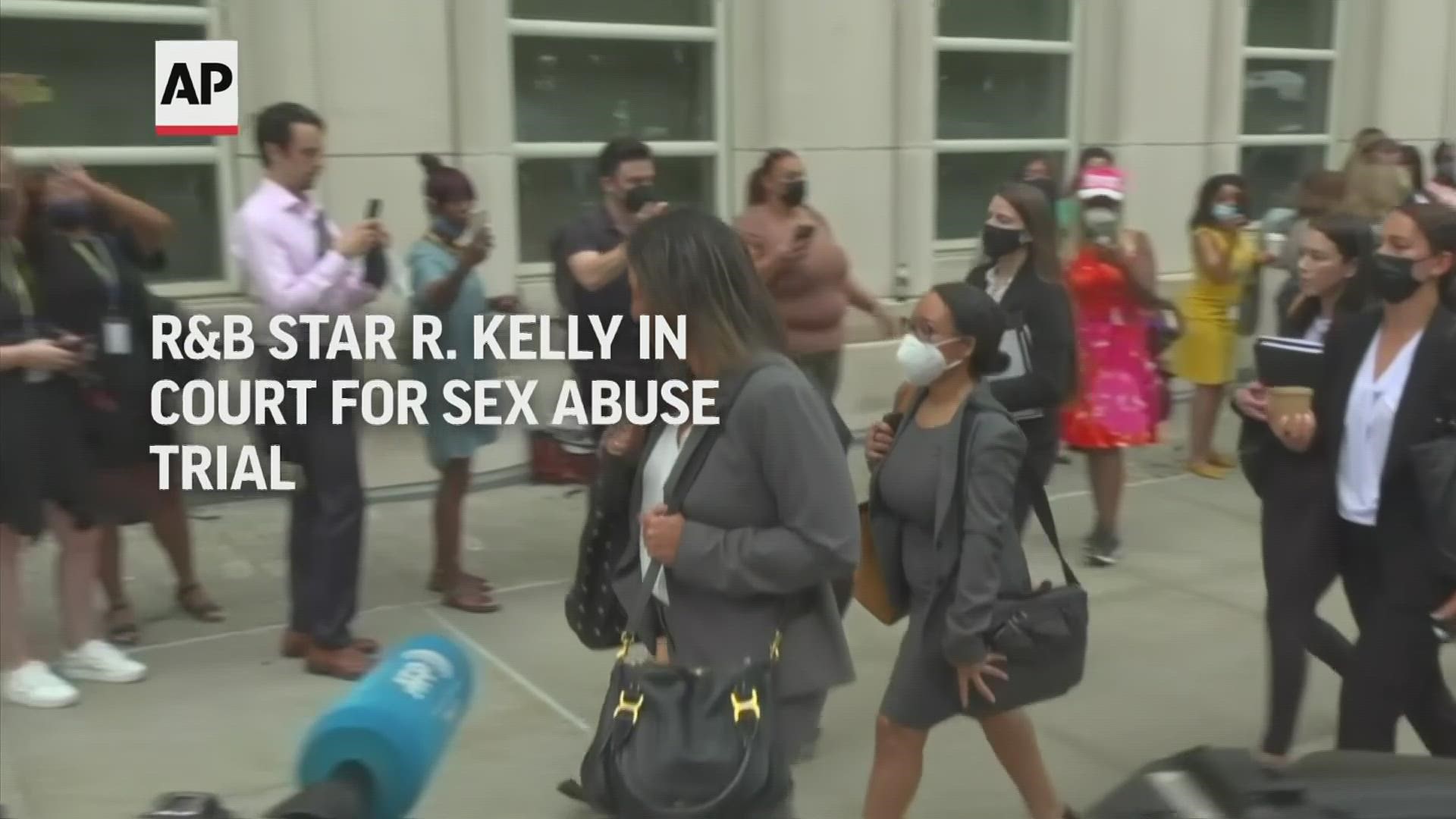 NEW YORK — R&B star R. Kelly is a predator who lured girls, boys and young women with his fame and dominated them physically, sexually and psychologically, a prosecutor said Wednesday, while a defense lawyer warned jurors they'll have to sift through lies from accusers with agendas to find the truth.

The differing perspectives came as the long-anticipated trial began unfolding in a Brooklyn courtroom where several accusers were expected to testify in the next month about the Grammy-winning, multiplatinum-selling singer whose career has been derailed by charges that have left him jailed as he goes broke.

“This case is not about a celebrity who likes to party a lot," Assistant U.S. Attorney Maria Cruz Melendez told the Brooklyn jury as she explained the evidence to be revealed at his federal trial. “This case is about a predator."

She said he distributed backstage passes to entice children and women to join him, sometimes at his home or studio, where he then “dominated and controlled them physically, sexually and psychologically.”

The prosecutor said Kelly would often record sex acts with minors as he controlled a racketeering enterprise of individuals who were loyal and devoted to him, eager to “fulfill each and everyone one of the defendant’s wishes and demands."

“What his success and popularity brought him was access, access to girls, boys and young women,” she said.

But Kelly's attorney, Nicole Blank Becker, portrayed her client as a victim of women, some of whom enjoyed the “notoriety of being able to tell their friends that they were with a superstar.”

“He didn’t recruit them. They were fans. They came to Mr. Kelly,” she said, urging jurors to closely scrutinize the testimony. “They knew exactly what they were getting into. It was no secret Mr. Kelly had multiple girlfriends. He was quite transparent.”

It would be a stretch to believe he orchestrated an elaborate criminal enterprise, like a mob boss, the lawyer said.

Becker warned jurors they'll have to sort through “a mess of lies" from women with an agenda.

Credit: AP
In this courtroom artist's sketch made from a video screen monitor of a Brooklyn courtroom, defendant R. Kelly, left, listens during the opening day of his trial, Wednesday, Aug. 18, 2021 in New York.

Defense lawyers have maintained in court papers prior to the trial that Kelly’s alleged victims were groupies who turned up at his shows and made it known they “were dying to be with him.” The women only started accusing him of abuse years later when public sentiment shifted against him, they said.

Kelly, 54, is perhaps best known for his smash hit “I Believe I Can Fly,” a 1996 song that became an inspirational anthem played at school graduations, weddings, advertisements and elsewhere.

The openings came more than a decade after Kelly was acquitted in a 2008 child pornography case in Chicago. It was a reprieve that allowed his music career to continue until the #MeToo era caught up with him, emboldening alleged victims to come forward.

The women's stories got wide exposure with the Lifetime documentary “Surviving R. Kelly." The series explored how an entourage of supporters protected Kelly and silenced his victims for decades, foreshadowing the federal racketeering conspiracy case that landed Kelly in jail in 2019.

Prosecutors in Brooklyn have lined up multiple female accusers — mostly referred to in court as “Jane Does” — and cooperating former associates who have never spoken publicly before about their experiences with Kelly.

They're expected to offer testimony about how Kelly's managers, bodyguards and other employees helped him recruit women and girls — and sometimes boys — for sexual exploitation. They say the group selected victims at concerts and other venues and arranged for them to travel to see Kelly in the New York City area and elsewhere, in violation of the Mann Act, the 1910 law that made it illegal to “transport any woman or girl” across state lines “for any immoral purpose."

When the women and girls arrived at their lodgings, a member of Kelly’s entourage would set down rules about not speaking to each other, how they should dress and how they needed permission from Kelly before eating or going to the bathroom, prosecutors say. Also, they allegedly were required to call him “Daddy.”

An anonymous jury made up of seven men and five women was sworn in to hear the case. The trial, coming after several delays due mostly to the pandemic, unfolds under coronavirus precautions restricting the press and the public to overflow courtrooms with video feeds.

The New York case is only part of the legal peril facing the singer, born Robert Sylvester Kelly. He also has pleaded not guilty to sex-related charges in Illinois and Minnesota.