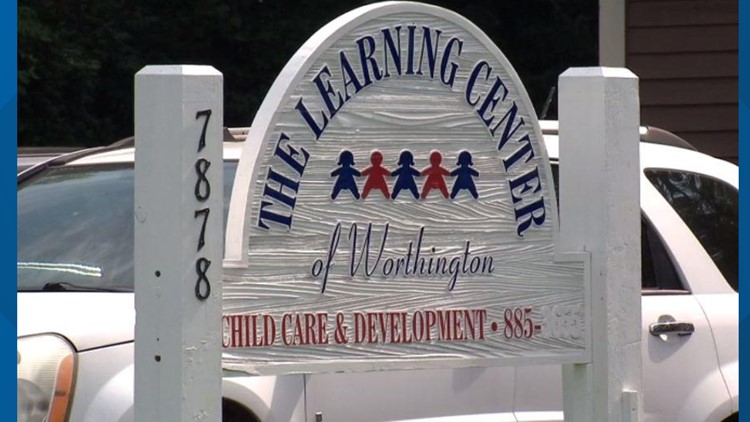 WORTHINGTON, Ohio — Columbus Police released a freeze-frame shot from a surveillance camera inside the Learning Center of Worthington daycare.

The single-frame shows kids in a semi-circle watching as teacher lift a 5-year-old by her ankle off the ground while another teacher sits and watches.

The girl's mother says police told her it didn't stop there.

"On the video, you could see the kids surrounding her. And she was laying on the ground in a fetal position and they were advised to take their shoes off and hit her with the shoes and swinging her around by her arms and legs," she says.

10TV is not identifying the mother to protect the identity of her 5-year-old daughter.

She says it's hard to imagine this would happen in a daycare she once trusted.

"I want to know why, but the same time I don't know if I want to know of, If anything, can justify the reasoning behind what happened. I kind of what to know if this happened before. I don't feel like this is the only time," she says.

She believes the incident, which police say happened Aug. 13 of this year, may never have come to light if not for a child who told a parent what he witnessed in the classroom, and that parent, says the mother, called children services.

"Another child notified their parent and that's how it got brought up, and if that child hadn't said anything, we wouldn't have known," she says.

10TV went to the Columbus homes of the daycare workers identified by police as 31-year-old Emma Dietrich and 27-year-old Joshua Tennant for comment, but neither came to the door.

Both are charged with "violating a duty of care and sitting by watching students, hit, grab, pull, and hold down the girl as a form of discipline and not preventing or stopping the assault."

For the girl's mother, she says she's grateful the daycare fired the employees when the allegation surfaced.

"They acted very quickly," she said.

You can see the state inspection report about the daycare here.