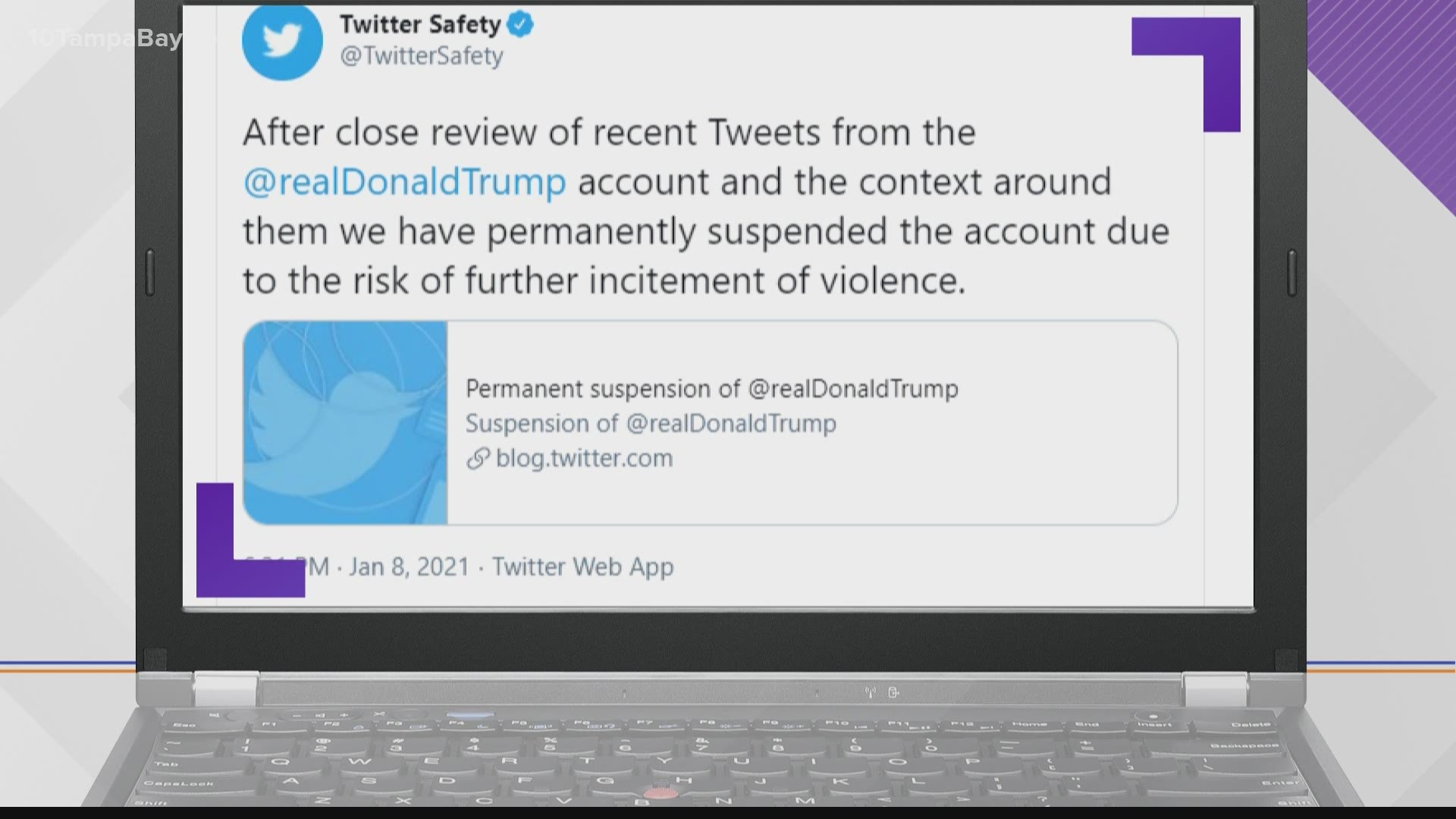 The president himself, his son, Donald Trump Jr., and conservative allies have railed against the social media platform for what they say is an attempt to quell Trump's right to free speech.

Clay Calvert, a law professor and the head of the Marion B. Brechner First Amendment Project at the University of Florida, says Twitter's suspension of Trump's account is fair game.

"If you think about it, if a private entity like Twitter or Facebook decided not to have you on their website, that's their deal...if the government were to try to throw you off or censor you, that's a First Amendment question."

In a blog post, Twitter said two tweets the president sent on Friday were the final straw -- not because of any inflammatory language, but because of how they were being perceived on social media and the risk of further incitement of violence. Twitter claims future attacks were already being discussed on and off their site.

Twitter's editorial power can be questioned, but Calvert said the legal standing for censorship is pretty clear.

.@ProfClayCalvert, who runs @UF's Marion B. Brechner First Amendment Project, said @Twitter's suspension of Trump's personal account is fair game: "If President Trump fails to follow those terms of use that Twitter enforces, I would say, equally...then there really is no issue." pic.twitter.com/Zp2MEGem7H

Even in his remarks on Friday, Trump said his efforts to curb protections from Section 230 of the Communications Decency Act, which shields social media platforms like Twitter and Facebook from liability for the content that's posted and generated by third parties, will continue.

U.S. Rep. Greg Steube, a Republican and Trump ally who oversees Florida's 17th Congressional District covering parts of Sarasota and Polk counties, told 10 Tampa Bay this week he's been involved in trying to "curb the abuses and censoring we've seen in big tech" and filed a bill to reform Section 230, claiming it consistently leads to a violation of First Amendment rights.

Calvert said as long as platforms don't create their own content and merely host third-party generated content, they have immunity under Section 230.

"The issue right now is whether or not platforms like Facebook or Twitter have become so powerful that we need to treat them more like broadcasting," he said. "...I think it's going to be a tough slog to get Section 230 immunity repealed here, to say that we need to treat these private actors on the internet more like they're broadcasters and, therefore, can be regulated closely."

But is there a conversation to be had about the power of social media platforms in how we, as a society, communicate?

"There probably is a question to be asked about how powerful these platforms have become in terms of social media...whether or not we need more players in the game," Calver said. "It is a conversation we can have about whether the government should come in and more closely regulate these social media platforms, like Twitter and Facebook, but frankly, I think the changes in that realm are not going to happen."