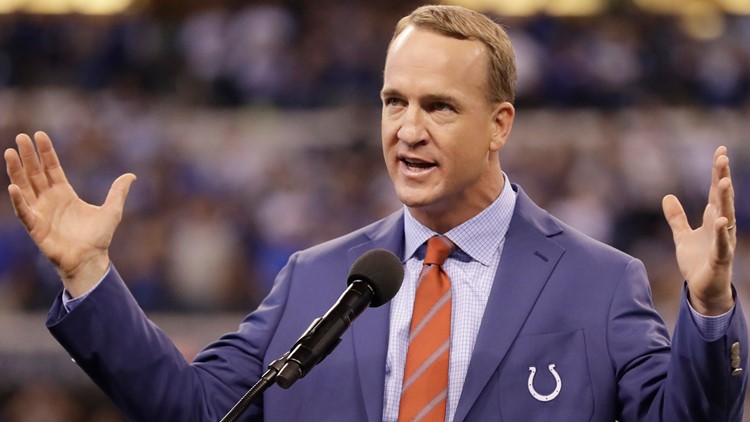 Photo by: AP
Former Indianapolis Colts quarterback Peyton Manning speaks during a halftime ceremony at an NFL football game between the Colts and the San Francisco 49ers, Sunday, Oct. 8, 2017, in Indianapolis. The Colts retired Manning's jersey during the ceremony. (AP Photo/Darron Cummings)

INDIANAPOLIS — (WTHR) - A familiar face may be coming to Monday Night Football and with a record paycheck, too.

Front Office Sports reported Thursday that ESPN is set to offer former Indianapolis Colts and Denver Broncos quarterback Peyton Manning between $18 million and $20 million a year to work as an analyst on Monday night games.

The report comes less than a week after Tony Romo signed a deal to stay on CBS' broadcast team for $17 million per season.

Front Office Sports said Manning, 43, has met with ESPN executives this week, but the network declined comment on the matter.

According to Pro Football Talk, ESPN has been trying to hire Manning since his retirement four years ago, but he was hesitant to take a broadcasting job while his brother Eli was still playing in the league. Eli Manning retired from the New York Giants at the end of last season.

If Manning does land in the broadcast booth, he could end up paired with former MNF play-by-play announcer Al Michaels, who currently calls games on NBC's Sunday Night Football. The New York Post reported ESPN is planning to approach NBC with a plan to bring Michaels onto their Monday night team.

Michaels still has two years left on his contract with NBC, the Post reported.

Pro Football Talk also reported ESPN has been working on a move to switch Monday Night Football to ABC and put that network back in the rotation to broadcast the Super Bowl.