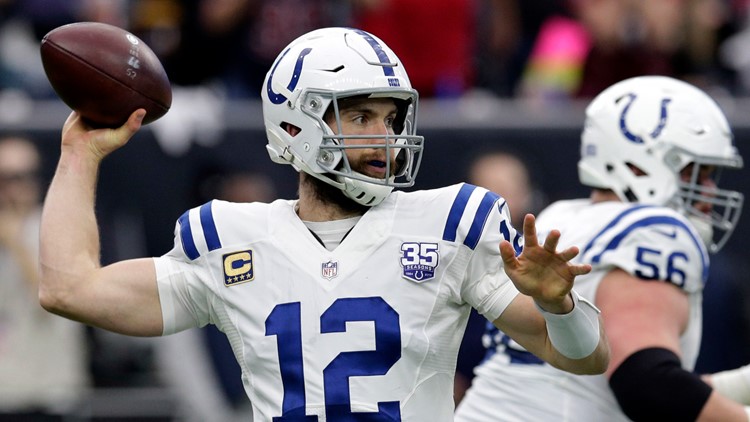 Photo by: AP
FILE - In this Jan. 5, 2019 file photo Indianapolis Colts quarterback Andrew Luck (12) throws against the Houston Texans during the first half of an NFL wild card playoff football game in Houston. The popular pick to win the AFC South all offseason has been Andrew Luck and the Indianapolis Colts. The ever-changing diagnosis for his strained left calf and ankle is dredging up bad memories of 2017 when his recovery from shoulder surgery kept him out all season. (AP Photo/Michael Wyke, File)

Indianapolis Colts quarterback Andrew Luck is retiring after seven seasons in the NFL. He was entering his eighth season but has been plagued by injuries and has not played in a preseason game.

ESPN's Adam Schefter first reported that Luck informed his team that he plans to retire. The report came during the fourth quarter of the Colts' 27-17 loss to the Chicago Bears on Saturday.

It was Indianapolis' third preseason game and they're now 0-3. They open the regular season September 8 on the road against the Los Angeles Chargers. They're away against the Cincinnati Bengals for the final preseason game on Thursday.

Jacoby Brissett, 26, is now expected to start at quarterback for the Colts.

Schefter said on Twitter that Luck is "mentally worn down, and now checking out."

Luck has already met with Colts owner Jim Irsay to tell him about his decision, the source said.

The Colts took Luck with the first pick of the 2012 draft out of Stanford. The 29-year-old turns 30 next month.

“I've been stuck in this process," Luck told Schefter. "It's taken the joy out of this game... the only way forward for me is to remove myself from football."

But others weren't as supportive. He was booed leaving the field in Indianapolis.

Luck got emotional on the podium after the Bears game. WTHR's Taylor Tannebaum tweeted Luck also said during the post-game news conference that he didn't plan on making the announcement tonight, and was going to tell his team after the game and hold a news conference on Sunday.

According to Tannebaum, Luck said he really started to contemplate retirement about three weeks ago. He said he can't specify the final straw but says “lack of progress” on his ankle injury was the main reason.

His retirement ends what had started as a largely hopeful career, and although he struggled with injuries, he earned a positive reputation beyond the field too.

After missing 2017 recovering from surgery on his throwing shoulder, he returned last season and led the Colts back to the playoffs for the first time in four years, also winning the league's Comeback Player of the Year award.