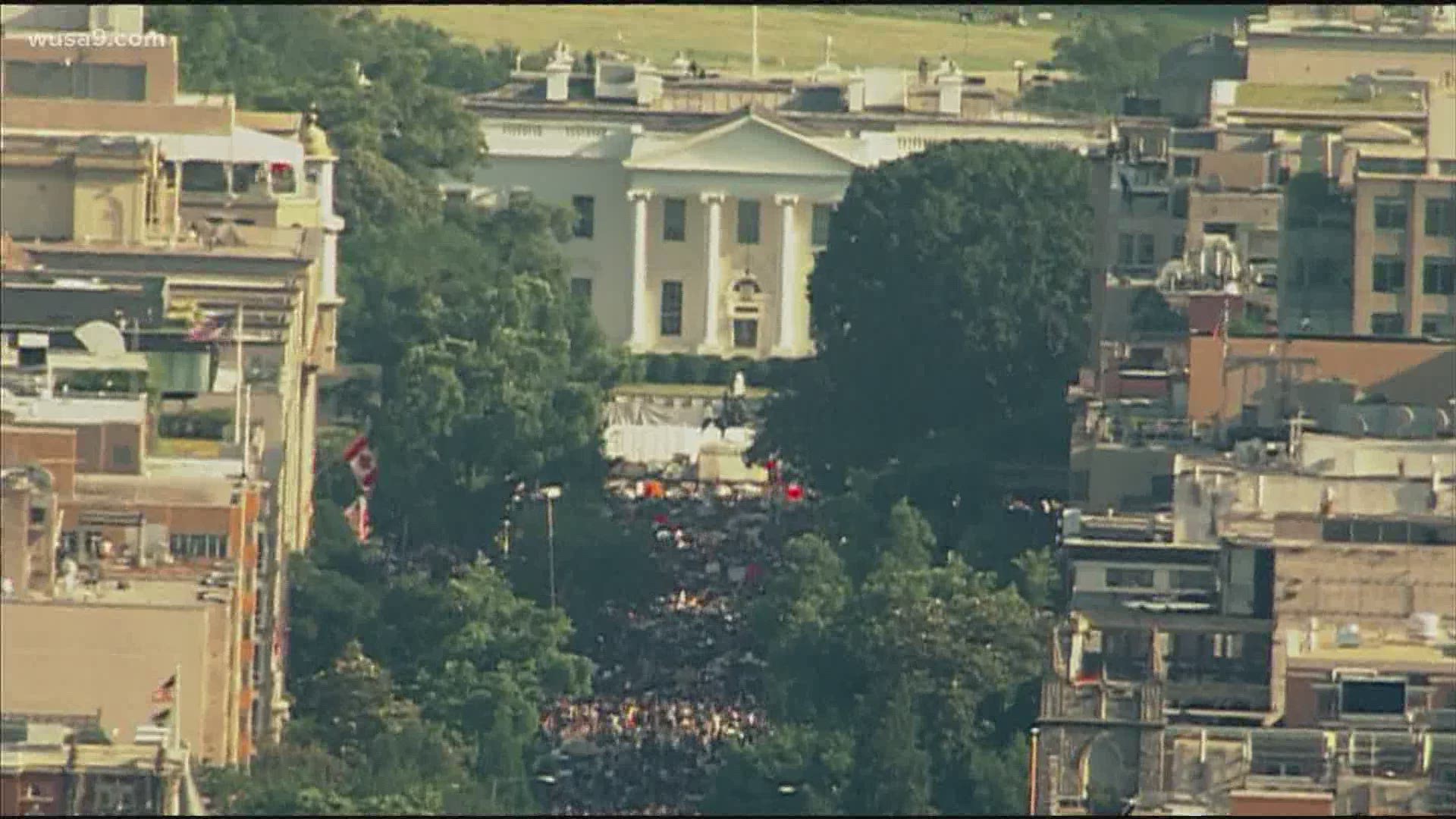 WASHINGTON — Democrats proposed a sweeping overhaul of police oversight and procedures Monday, an ambitious legislative response to the mass protests denouncing the deaths of black Americans at the hands of law enforcement.

Before unveiling the package, House and Senate Democrats held a moment of silence at the Capitol's Emancipation Hall, reading the names of George Floyd and others killed during police interactions. They knelt for 8 minutes and 46 seconds — now a symbol of police brutality and violence — the length of time prosecutors say Floyd was pinned under a white police officer’s knee before he died.

“We cannot settle for anything less than transformative structural change,” said House Speaker Nancy Pelosi, drawing on the nation's history of slavery.

The Justice in Policing Act would limit legal protections for police, create a national database of excessive-force incidents and ban police choke holds, among other changes, according to an early draft. It is the most ambitious change to law enforcement sought by Congress in years.

The measure would also prohibit no-knock warrants in drug cases, according to NBC News and the Washington Post, like what was used in the incident that led to the fatal shooting of Breonna Taylor in Louisville, Kentucky.

Rep. Karen Bass, D-Calif., chairwoman of the Congressional Black Caucus, which is leading the effort, said called it “transformative.”

“The world is witnessing the birth of a new movement in this country,” Bass said.

Tens of thousands of demonstrators nationwide have been protesting in the streets since Floyd was killed May 25 for an end to police violence.

The package confronts several aspects of law enforcement accountability and practices that have come under criticism, especially as more and more police violence is captured on cell phone video and shared widely across the nation, and the world.

The proposed legislation would revise the federal criminal police misconduct statute to make it easier to prosecute officers who are involved in misconduct “knowingly or with reckless disregard."

The package would also change “qualified immunity” protections for police “to enable individuals to recover damages when law enforcement officers violate their constitutional rights,” it says.

The legislation would seek to provide greater oversight and transparency of police behavior in several ways. For one, it would grant subpoena power to the Justice Department to conduct “pattern and practice” investigations of potential misconduct and help states conduct independent investigations. It would ban racial profiling and boost requirements for police body cameras.

And it would create a “National Police Misconduct Registry," a database to try to prevent officers from transferring from one department to another with past misconduct undetected, the draft said.

RELATED: When protesters cry 'defund the police,' what does it mean?

A long-sought federal anti-lynching bill stalled in Congress is included in the package.

However, the package stops short calls by leading activists to “defund the police,” a push to dismantle or reduce financial resources to police departments that has struck new intensity in the weeks of protests since Floyd's death.

House Judiciary Committee Chairman Jerrold Nadler, D-N.Y., a co-author with Bass and the Democratic senators, will convene a hearing on the legislation this week.

Credit: AP
With the U.S. Capitol and Washington Monument in the distance, a man stands at the edge of the Lincoln Memorial Reflecting Pool at sunrise, Sunday, June 7, 2020, in Washington.

It is unclear if law enforcement and the powerful police unions will back any of the proposed changes or if congressional Republicans will join the effort.

At least one Republican, Sen. Mike Lee of Utah, who has long pushed for a criminal justice overhaul, has said he'd like to review the package coming from Democrats.

And Sen. Lindsey Graham, R-S.C., the chairman of the Senate Judiciary Committee, has said his panel intends to hold a hearing to review use of force issues and police practices.

"This broad reform package includes provisions I support, like finally making lynching a federal crime and improving officer training around racial bias," Collins said in a statement. "I also support efforts to improve the use of pattern-or-practice investigations, which enable the Federal government to investigate police departments that have exhibited past incidents of racial bias."

The presumed Democratic presidential nominee, Joe Biden, has backed a ban on chokeholds and other elements of the package.

“I can't breathe" has become a rallying cry by protesters. Floyd pleaded with police that he couldn't breathe, echoing the same phrase Eric Garner said while in police custody in 2014 before his death.

Sen. Cory Booker, a Democratic rival who had been critical of Biden during the presidential primary campaign, said he “fully” put his faith in Biden now “to be the person who could preside over this transformative change.”

“This is a referendum on who we are as Americans and who we’re going to be to each other," Booker said on NBC.

Booker and fellow one-time presidential hopeful, Sen. Kamala Harris of California, are co-authors of the package in the Senate.

TEGNA Staff contributed to this report.