The president directly challenged the Republicans whose dogma has been that low taxes for corporations and the wealthy will fuel economic growth. 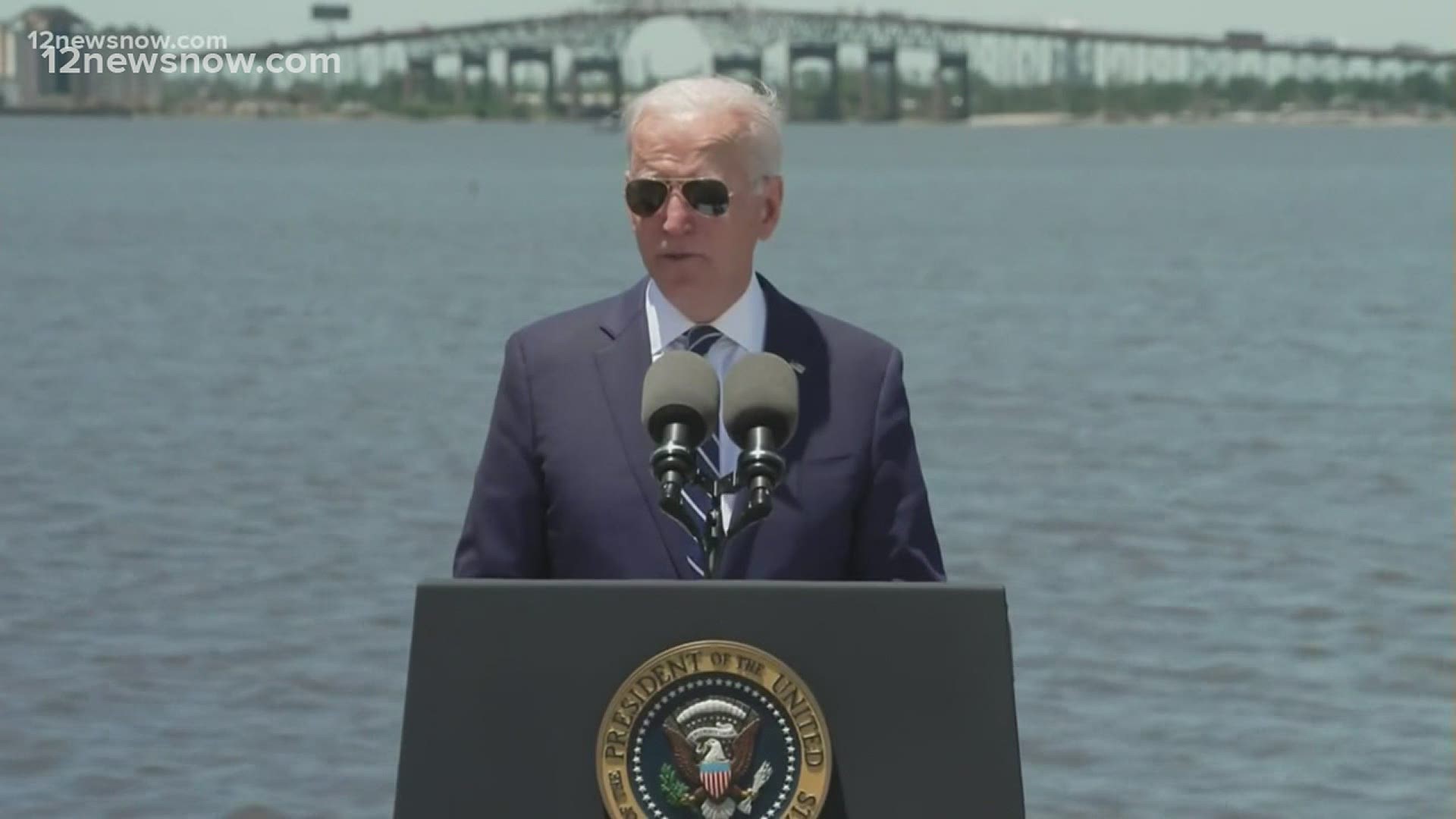 WASHINGTON — With a badly aging bridge as his backdrop, President Joe Biden stood in reliably Republican Louisiana on Thursday to pressure GOP lawmakers to support his $2.3 trillion infrastructure plan — and yet express a willingness to compromise on the corporate tax hikes he's recommending to pay the cost.

Biden leaned into the stagecraft of the presidency by choosing to speak in the city of Lake Charles, which has been battered by historic storms and is home to a 70-year-old bridge that is two decades past its designed lifespan.

Where to find the money for replacements and repairs here and elsewhere? The Democratic president, who wants to raise corporate taxes, challenged Republican dogma that low taxes for corporations and the wealthy fuel economic growth. But he also declared he was willing to make a deal and dared them to do the same.

RELATED: What can pass and what will sink from President Biden's agenda

Even as he engages with Republicans in Washington, Biden is trying to sell their voters on the idea that higher corporate taxes can provide $115 billion for roads and bridges and hundreds of billions of dollars more to upgrade America's electrical grid, make the water system safer, rebuild homes and jump-start the manufacturing of electric vehicles. To drive home the point, he also toured a water plant in New Orleans.

He’s proposing to pay for his plan by undoing the 2017 tax cuts signed into law by President Donald Trump and raising the corporate tax rate from 21% to 28%. Biden contends his programs would bolster the middle class and make the country stronger than tax cuts for big companies and CEOs.

"You’re entitled to be a millionaire, be a billionaire, just pay your fair share," said Biden. “I’m not looking to punish anyone. I’m sick and tired of corporate America not doing their fair share.”

The White House has found little support from congressional Republicans, none of whom voted for the $1.9 trillion COVID-19 bill signed into law in March and who have, so far, uniformly opposed the infrastructure plan. But the West Wing has pointed to polling that suggests the plan is popular with GOP voters and notes that some Republican officials do back it.

To emphasize that point, Biden was introduced in Lake Charles, which still has blue tarps where roofs once were and plywood replacing glass in office buildings, by a Democratic governor, John Bel Edwards, and the city's Republican mayor, Nic Hunter. Hunter outlined his many political differences with the president before focusing on their common ground.

Louisiana has a long history of accepting federal money for storm recovery — most notably after Katrina and Rita in 2005. And the Army Corps of Engineers has been a staple in the state managing the Mississippi River levees and drain basins, demonstrating that the conservative lean of voters has been tempered by that established relationship with the federal treasury.

Republican lawmakers, however, are firmly sticking with low taxes as a pillar of their ideology and partisan identity.

Several GOP senators favor spending $568 billion on infrastructure over five years, a small fraction of what the Democratic president has proposed — a sign of how difficult a deal might be.

Senate Minority Leader Mitch McConnell of Kentucky said that Republicans would rather finance infrastructure through user fees such as tolls and gasoline taxes, though he declined to specify which fees he would back.

McConnell has also said that “100%” of his focus was “on stopping this new administration,” echoing similarly obstructionist threats he made during President Barack Obama’s term and underscoring the challenge Biden faces in trying to work across the aisle.

Biden brushed off that talk, noting that as vice president he was “able to get a lot done” with McConnell during the Obama era. And after landing in New Orleans ahead of his water plant tour, he spent time on the tarmac talking with Louisiana's two Republican senators, John Kennedy and Bill Cassidy. But the president's true audience has been Republican voters, not GOP lawmakers on Capitol Hill.

The administration is banking that its message on infrastructure could play in Louisiana, which last backed a Democratic presidential candidate in 1996. Louisiana has been barraged by 30 extreme weather events over the past decade that caused $50 billion worth of damage. Biden is seeking $50 billion to make infrastructure better able to withstand storms, winds and flooding.

Hurricanes battered Lake Charles, a city of 78,000 residents, twice last year over six weeks. Trump, whose administration's planned “Infrastructure Weeks” became noted for being anything but, had promised to fix the city's bridge were he to be reelected.

There is general agreement among Democrats and Republicans in Washington about the need for infrastructure spending, but the GOP wants to define the term more narrowly, concentrating on roads, bridges, airports, transit and broadband rather than renewable energy and access to caregivers. They object to undoing the 2017 tax cuts and imposing higher taxes on corporations and the wealthy.