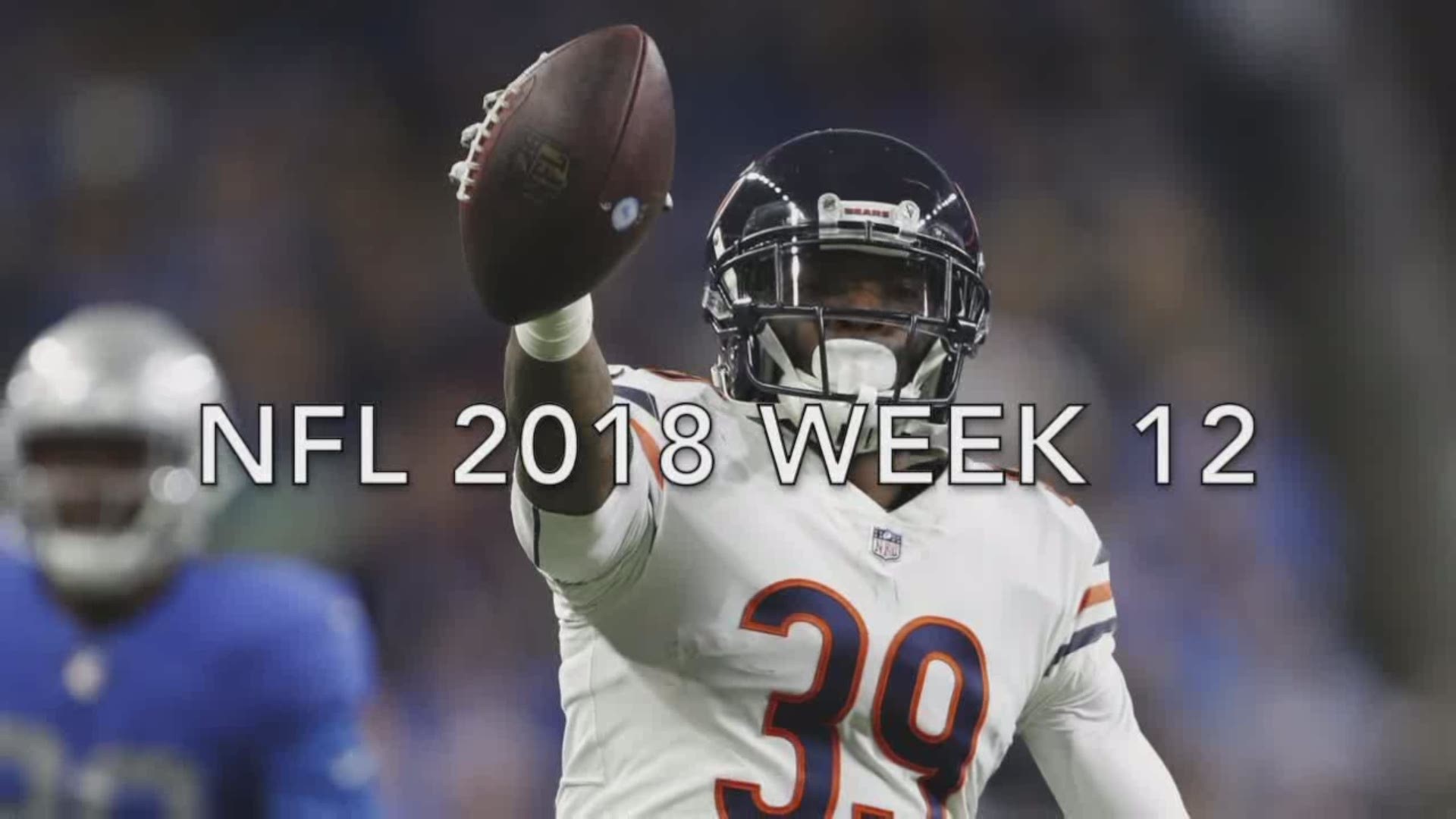 1. Fair to say Philip Rivers was on point Sunday? He completed 25 passes in a row, most ever in a single league game, in the Chargers' smackdown of Arizona.

1a. Rivers also set a record for completion percentage in one game (96.6) after connecting on 28 of 29 throws.

1b. Lastly, he led the Bolts to 45 consecutive points over the final three quarters after L.A. spotted the lowly Cards 10 in the opening period.

2. Dearest mother — It's time to start talking about @CaptAndrewLuck (even though he was sacked for the first time since Week 5) as a bona fide MVP candidate. It's much easier to imagine the Saints or Chiefs as potential playoff teams without their respective stud quarterbacks than the Colts sans Luck, who lofted at least three TD passes for the eighth consecutive game (the second-longest such streak in league history).

Dearest mother —
I write you so full of joy, I might burst. Our unit secured yet another victory. That makes five straight, or an entire hand. The Dolphin men put up a great fight, but our aquatic drilling paid dividends. Our trusted sniper capped the win. I am beaming.
— Andrew

3. That said, does the public really want either Indianapolis (6-5) or Miami (5-6) sneaking into postseason? In one particularly putrid stretch of three plays between them, two Xavien Howard interceptions of Luck sandwiched a fumble by Miami rookie TE Mike Gesicki.

3a. So, yeah, the most intriguing outcome would be Baltimore hanging onto that sixth AFC playoff berth — after all, Ravens rookie QB Lamar Jackson is quite the wild card after another great day running the ball (71 yards, TD on 11 carries) but an uneven one through the air (178 yards, TD, 2 INTs).

3b. But we haven't forgotten about Denver (5-6), quite the intriguing squad after snapping Pittsburgh's six-game winning streak Sunday a week after ending the Chargers' run at a half-dozen.

Kicker throwing a TD to an OT = trick-play magic for the Steelers! (Via @thecheckdown) pic.twitter.com/qU44bXXrWS

5. Linemen taketh away: The 56th and final pass thrown by Steelers QB Ben Roethlisberger was intercepted in the end zone ... by Broncos NT Shelby Harris.

6. Was Indianapolis TE Eric Ebron the free agent signing of the offseason? He has 11 TD grabs in 2018, matching his total from the previous four seasons — combined.

7. Jaguars CB Jalen Ramsey said of Bills rookie QB Josh Allen in an offseason interview with GQ: "Allen is trash. I don’t care what nobody say. He’s trash. And it’s gonna show too. That’s a stupid draft pick to me.” Sunday, Allen proceeded to trash the trash Jaguars, throwing a 75-yard TD and running one in from 14 yards in a 24-21 Buffalo win.

8. Welp. You coulda kept your job as Bills coach, Doug Marrone. After watching your talented but careening Jacksonville team — did you really have to drop the gloves, Fournette? — drop its seventh straight, no guarantee you'll be hanging onto this gig much longer.

9. It's getting really hard to find the silver linings, @BortlesFacts, but the fact remains: BB5 has never lost to Buffalo ... in the playoffs.

10. I touted the Browns as a playoff dark horse in Week 3, after rookie Baker Mayfield cracked the lineup. Sure, they're a pedestrian 4-5 since — though that's a very happy factory by Cleveland standards — but are only 1½ games out of the AFC's final wild-card spot. On Sunday, Cleveland trounced the Bengals 35-20 — Mayfield threw TD passes to four separate receivers, in Cincinnati, meaning ...

10a. The Browns' 25-game road losing streak ended, one shy of the Lions' all-time record.

10b. The Browns won consecutive games for the first time since completing a three-game win streak Nov. 6, 2014.

11. Christian McCaffrey became the first Panthers player with 100 yards rushing (125) and receiving (112) in the same game.

12. However Carolina couldn't overcome more decisions that backfired on coach "Riverboat Ron" Rivera in a 30-27 loss to Seattle. He spurned a nearly automatic field goal in the first quarter, going for it on fourth-and-2 from the Seattle 5. Oops. With the game tied on the Panthers' final possession, Rivera (understandably) allowed Graham Gano to attempt a 52-yard field goal, but that didn't work out, either. Gano's miss gave the Seahawks a short field — which they ultimately parlayed into Sebastian Janikowski's game-winning, 31-yard field goal on the final play. (And, don't forget, Rivera's failed decision to go for two cemented a loss in Detroit last week.)

12a. Losers of three in a row, the Panthers — once regarded as a legit Super Bowl threat — find themselves on the playoff fringes.

13. Despite the long flight, the Seahawks have now won their last four regular-season games in Charlotte.

13a. Seattle won even though its top-ranked ground game produced a mere 75 yards, the first time it had been held to fewer than 150 since Week 3.

14. Had the Jets' Sam Darnold (foot) been able to play Sunday, there would have been a two-decade difference between starting quarterbacks — Darnold is 21 and New England's Tom Brady is 41.

14a. Instead, the game's QBs averaged 40 years of age, with Brady facing Jets backup Josh McCown, who is 39.

14b. #TB1K update: Brady's game-ending kneeldown meant he finished the day with minus-1 rushing yards, setting his quest for 1,000 career rushing yards back to 995.

14c. #TB80K update: After passing for 283 yards against the Jets, TB12 now has 79,416 in his career, including playoffs. That breaks Peyton Manning's record for combined passing yards in the regular and postseasons (79,279).

15. Patriots TE Rob Gronkowski scored a touchdown for the first time since Week 1. Gronk's stretch of six scoreless games had been the longest of his nine-year career.

16. Since trampling Denver for 323 rushing yards in Week 5, the Jets have averaged 77.5 in the six game since and have been held to fewer than 100 in five straight.

17. After surviving the Giants, the Eagles are only one game out of first place in the NFC East. However history is against them. No team has repeated as division champion since Philadelphia's four-year stranglehold from 2001 to 2004.

18. Could Matt Judon be the Ravens' next great pass rusher? Stay tuned, but it's worth noting he had a career-best three sacks Sunday and 14 since the start of the 2017 season, when he became a starter.

19. Could Joey Bosa be the league's next great pass rusher? He collected two sacks Sunday — his second game of the season after coming back from a foot injury. Bosa averages .83 sacks per game in his three-year career.

19a. By comparison, J.J. Watt averages .88 per game during his eight-year career.

20. Kudos to 49ers GM John Lynch and coach Kyle Shanahan for adhering to their zero-tolerance policy on Reuben Foster, a first-round pick last year. San Francisco will release the troubled linebacker, who incurred a domestic violence charge stemming from an alleged incident at the team hotel in Tampa on Saturday. Foster was also arrested earlier this year, but that domestic violence charge was dropped after his accuser recanted.

21. Buccaneers WR Mike Evans has now eclipsed 1,000 receiving yards in each of his five seasons. Only Randy Moss (first six seasons) and A.J. Green (first five) have gotten off to equally good starts.

22. This isn't baseball, with its American League vs. National League purists, but still seemed kinda odd that the league scheduled only NFC teams for its Thanksgiving tripleheader.

23a. Brees' 29 TD passes this season have been distributed among 13 different teammates, a figure only Matt Ryan (in 2016) has matched since the merger.

24. Did you know the 21 head-to-head matchups between Brees and Ryan are the most ever between opposing quarterbacks?

26. Aaron Rodgers' continued frustration was evident in Sunday night's loss at Minnesota. But the two-time MVP, usually accurate as an atomic clock, continues to hoist too many off-target throws.

27. Chicago QB Chase Daniel ... started his first game Thursday since 2014 ... did it on a short week that didn't allow for needed reps with the first-team offense ... connected for two TD passes anyway ... and kept the Bears rolling with his second career win.

28. Washington QB Colt McCoy ... started his first game Thursday since 2014 ... did it on a short week that didn't allow for needed reps with the first-team offense ... connected for two TD passes anyway ... but couldn't prevent the Redskins from losing their grip on first place.

29. Nice job, Ezekiel Elliott. His 143 total yards and a TD in Thursday's win over Washington was nice. What's better? Elliott, who tossed $21 (he wears No. 21) into The Salvation Army kettle at AT&T Stadium this year, will match $21 donations to this year's Red Kettle Campaign (the Cowboys will also match those gifts).

30. I still think Dallas gave up too much for WR Amari Cooper in the long run, but he's certainly starting to pay dividends in the near term.

31. Was the Bears' Motown troll the celebration of the year thus far?

32.Late Texans owner Robert McNair made some unfortunate statements in recent years. But let's not allow them to overshadow the fact he brought the NFL back to Houston and, more importantly, had a hugely philanthropic spirit which he didn't publicize. Rest in peace.

Bonus 33. Meanwhile, in the Johnny Manziel Football League, congrats to the Calgary Stampeders. They won the 106th Grey Cup (the eighth in franchise history) by beating the Ottawa Redblacks 27-16.

Bonus 33a. FWIW, Manziel was nowhere near this prestigious event in beautiful Alberta.