Why Trump doesn't just fire Attorney General Jeff Sessions. Yes, the Senate has something to do with it. 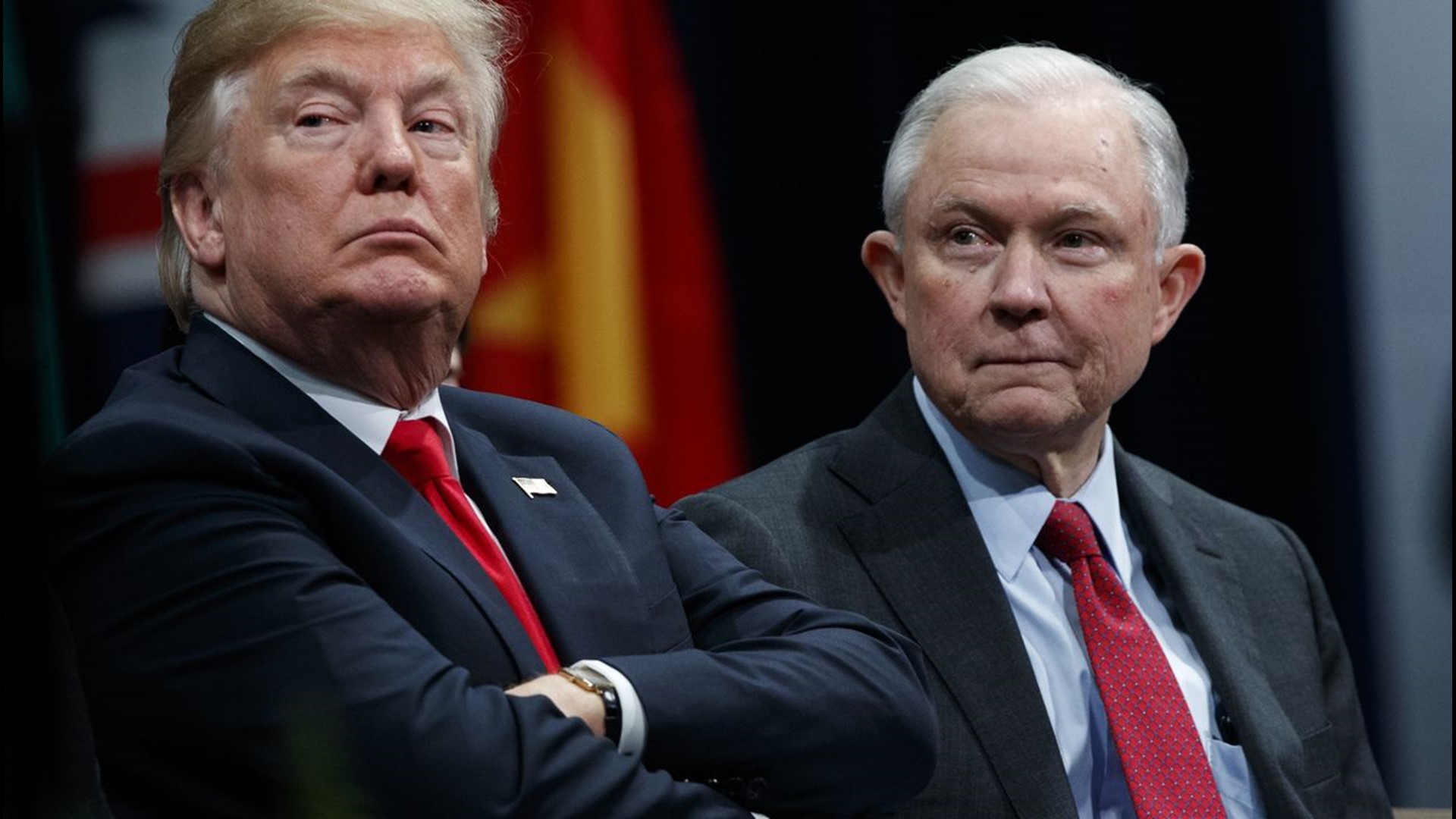 WASHINGTON — As President Trump renews his public attacks on Attorney General Jeff Sessions, it raises the question: why does't Trump just fire him?

At least part of the answer can be found in the U.S. Senate, where key Republican senators have warned the White House that the president could be waiting indefinitely for a new attorney general if he tosses out their former colleague.

Sessions served 20 years as a senator from Alabama and was a member of the Senate Judiciary Committee — the same panel that would lead the confirmation process for any new attorney general. The committee's chairman, Sen. Chuck Grassley, R-Iowa, said recently that, given the busy schedules of the panel and the Senate, "it would be difficult to confirm an AG nominee this year." Senate Majority Leader Mitch McConnell, R-Ky., also has expressed support for Sessions.

It's enough to make Trump and his advisers stop and think twice about firing Sessions, said Frances Lee, a political science professor at the University of Maryland.

"I think it's a constraint on the White House," she said. "There have been a lot of signals to the president that senators think Sessions should stay in his job."

It's not just loyalty to their former colleague that is motivating senators, Lee said.

"They don't believe that Trump is treating Sessions fairly," she said.

Trump's main complaint about Sessions is that the attorney general recused himself from the Russia investigation because he served as an adviser to the Trump campaign. That led to the appointment of Special Counsel Robert Mueller, who is investigating Russian interference in the 2016 election, possible collusion between the Trump campaign and the Kremlin, and possible obstruction of justice by the president.

In a tweet on Tuesday, Trump wrote that "The Russian Witch Hunt Hoax continues, all because Jeff Sessions didn't tell me he was going to recuse himself."

The Russian Witch Hunt Hoax continues, all because Jeff Sessions didn’t tell me he was going to recuse himself...I would have quickly picked someone else. So much time and money wasted, so many lives ruined...and Sessions knew better than most that there was No Collusion!

But most GOP senators agree with Sessions' decision to recuse himself and think Trump should be pleased by Sessions' efforts to implement the president's policies on immigration enforcement, drugs and crime, Lee said.

"If Republicans thought Trump had a good reason to fire Sessions, they would be more supportive," she said. "But they don't think it's justified. I think Republican senators believe that Trump should be able to work with Sessions. He's loyal to Trump, he was an early supporter, and he shares his policy views."

He also was a congenial senator that other senators liked, even when they didn't agree with his extremely conservative views, said Grant Reeher, a political science professor and director of the Campbell Public Affairs Institute at Syracuse University.

"The sense of tradition is very strong in the Senate — there's a level of mutual respect and having each other's back," Reeher said. "But it's also important what kind of senator he was. Just imagine that this was Attorney General Ted Cruz instead of Sessions. I don't think it would be playing out quite the same way."

Cruz, a Republican senator from Texas, is infamous for taking to the Senate floor in 2015 to accuse McConnell — his own leader — of lying to senators. Cruz, angry over how McConnell handled the amendment process on a transportation bill, charged that McConnell "is willing to say things that he knows are false."

In contrast, Reeher said, Sessions has a reputation for treating his colleagues with respect and observing Senate decorum.

"That's why I think the president has gotten that kind of stiff resistance when he has floated the idea of getting rid of Sessions," Reeher said. "I think senators think 'I'm going to stick up for this particular colleague, because I think he would have done the same for me.' "

Senators are also pushing back against Trump to defend the institution of the Senate itself, said Eric Herzik, chairman of the political science department at the University of Nevada, Reno.

"You have some older, more established adults in the Senate — like Chuck Grassley, John McCain and Lindsey Graham — who recognize the institutional importance of the Senate serving as a check on the president," Herzik said. "This would never happen in the House. You've got people in the House saying that they work for the president, which seems to me to be a fundamental misunderstanding of how our system is supposed to work. But in the Senate, they are more loyal to the institution."

Sessions likely finds comfort in his former colleagues' support, which may be one reason he doesn't step down amid all the verbal abuse from the president, Lee said.

"That may make the job more tolerable to him," she said. "He has a constituency in Congress, so it's not like he's hanging out there with no political support."

"He's able to pursue the issues he cares about, he's able to do the things he wants to do in running the Justice Department," she said. "He's in sync with the president in every regard except the Russia investigation."

Though Senate support for Sessions may make Trump hesitant to fire the attorney general, Sessions should not count on the Senate to save him, Herzik said.

"The Senate's support has protected Sessions, but Trump could turn on a dime and call the Senate's bluff," he said.

If Trump does fire Sessions, it would be the ultimate test of the Senate's resolve to stick up for its colleagues and itself, Herzik said.

"It would be interesting to see if the Republicans would stand up to the president and actually do their institutional duty," he said.

If the Senate held firm and refused to confirm a new attorney general, Trump could try to make a "recess appointment" — naming a new attorney general while the Senate is in recess. However, Senate leaders can block a recess appointment by refusing to officially adjourn, holding brief "pro forma" sessions every few days that can be led by just one senator.

Even if Senate leaders folded and decided to vote quickly on a new attorney general, there's no guarantee a new one would be confirmed, Lee said. Republicans hold a slim 51-49 majority, and some maverick Republicans such as Sen. Jeff Flake, R-Ariz., may vote with Democrats against confirmation, Lee said.

"The politics of trying to get somebody else in there would be really brutal," she said.