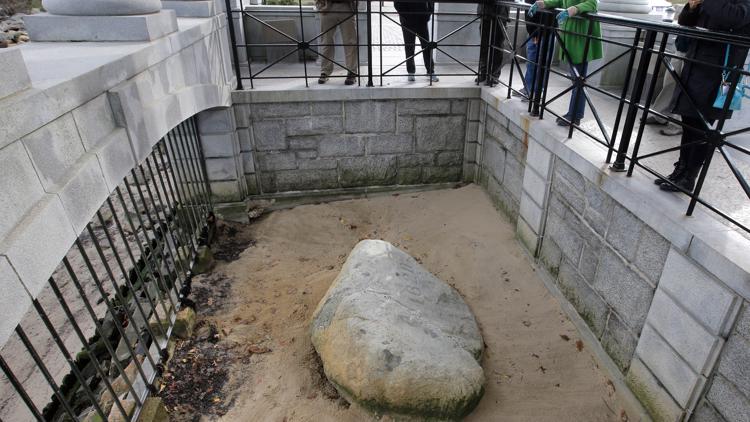 WASHINGTON — As the town of Plymouth, Massachusetts began preparing to celebrate the 400th anniversary of the arrival of the Pilgrims, residents discovered their historic landmark, which includes Plymouth Rock itself, had been spray painted red.

Images of the scene showed the rock, which has 1620 chiseled into it, was found covered in red paint Monday. The number etched into the rock marks the year the Pilgrims, including William Bradford, landed there as the legend says.

Police are investigating the vandalism spree and town officials say removal of the red spray paint on the rock in Plymouth had begun by late Monday morning.

According to police the vandals also hit a seashell-shaped sign celebrating the upcoming quatercentenary of the 1620 Mayflower landing, the Pilgrim Maiden statue as well as the National Monument To The Forefathers. It was not immediately clear to police or officials if this graffiti incident had a connection to the 400th anniversary. No arrests had been made by Monday afternoon.

The rock and a shell monument had "508 mof" written on them.

Town Manager Melissa Arrighi posted a picture on Twitter of one of the monuments that was vandalized saying, "This is just one of our historic monuments that was hit. We will begin clean up as soon as possible and the police are investigating."

In 1620 the Mayflower arrived in Plymouth Harbor after a stop near what we call Provincetown today. The National Museum of American History, which holds donated pieces of Plymouth's "Mother Rock," points out that the site and the rock have gained national icon status. The imagination of authors, painters and politicians has kept the site in America's "historical consciousness."