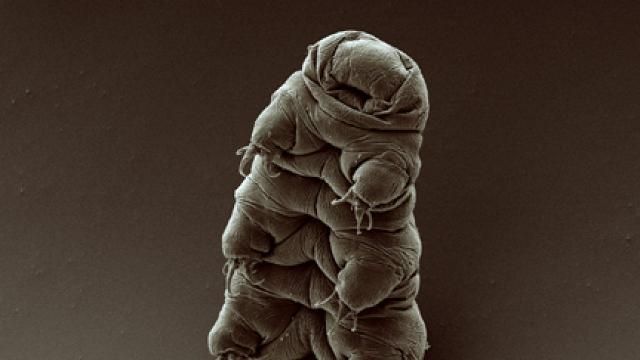 Credit: Science Picture Co, via Getty Images
The world's most indestructible species, the tardigrade, an eight-legged micro-animal will survive until the Sun dies, according to a new Oxford University study.

More news from the bizarre world of tardigrades, those freaky microscopic creatures that look like something out of your weirdest nightmares.

A new species of the creature was discovered in a parking lot in Japan, according to a study published this week.

The species is called Macrobiotus shonaicus, and it's the 168th separate tardigrade species discovered in Japan.

Credit: PLOS One
A top view of the new species of tardigrade.

Most tardigrades are "found in mosses, lichens, leaf litter and soil," the study said, and this animal was found by a researcher in moss growing on concrete near his home in Tsuruoka-City, Japan.

Moss is a common place to find tardigrades, study co-author Kazuharu Arakawa told Live Science, but "it was quite surprising to find a new species around my apartment!"

The species has the typical plump-caterpillar look of a tardigrade, and its O-shaped mouth is ringed by three rows of teeth, Live Science said.

The species is part of a set of tardigrades known as hufelandi, which had not been identified anywhere in East Asia.

The tiny animals are the world's most indestructible species and are likely to survive until the sun dies, a study reported last year.

More: Meet the hideous creature that will live to the end of the world

Also known as water bears, they live in almost every region in the world and are the toughest, most resilient lifeform on Earth, able to survive for up to 30 years without food or water. They can survive wild temperature extremes, from 300 degrees below zero to 300 degrees above zero.

The critters, which are only about 1/100th of an inch long, are best viewed under a microscope.

The latest study was published in the peer-reviewed journal PLOS One.

Credit: PLOS One
Two views of the mouth of the new species of tardigrade.