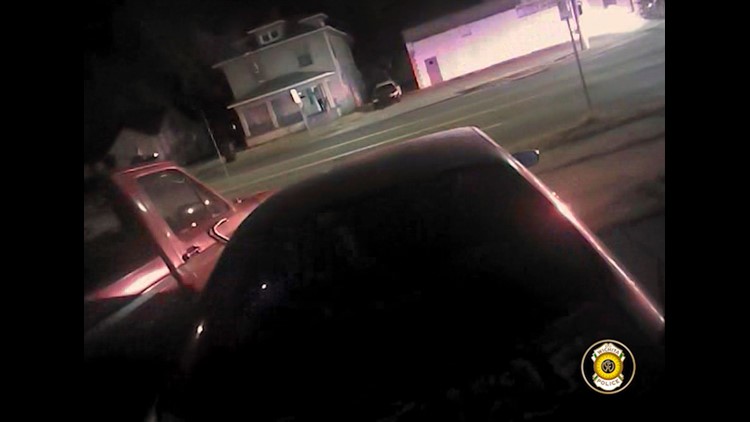 Photo by: Fernando Salazar, AP
A frame grab from the Wichita Police Department's release Friday, Dec. 29, 2017, of some body cam footage of the fatal shooting of Andrew Finch, 29, by a Wichita police officer Thursday night. Online gamers have said in multiple Twitter posts that the shooting of a man Thursday night by Wichita police was the result of a "swatting" hoax involving two gamers.

A California man has pleaded guilty to a "swatting" prank initiated in response to a bet over a video game that led to the fatal shooting of a man in Kansas.

Tyler Barriss, 25, of Los Angeles pleaded guilty to multiple charges, including making a false report to authorities, cyberstalking and conspiracy related to the prank. As part of his deal, Barriss will serve at least 20 years in prison.

"Swatting" is a practice where an individual makes a phony call to 911 to force police to respond with SWAT teams.

Last year, Barriss was arrested by L.A. police, accused of making a fake 911 call in response to an argument with an online gamer while playing "Call of Duty," a video game.

Authorities said Barriss made the call, giving police what he thought was the other gamer's address and claiming there was a hostage situation.

Police in Kansas arrived at the home of Andrew Finch, 28, who had no connection to the gamers. An officer shot Finch after he unexpectedly dropped his hands, and Finch later died at the hospital.

"Without ever stepping foot in Wichita, the defendant created a chaotic situation that quickly turned from dangerous to deadly," said U.S. Attorney Stephen McAllister in a statement.

"His reasons were trivial and his disregard for the safety of other people was staggering."

Barriss also pleaded guilty to making fake emergency calls to the FBI and Federal Communications Commission in Washington, D.C., as well as numerous hoax calls of bomb threats to emergency services in 17 other states.

In April, a Kansas prosecutor said the officer who shot Finch will not face charges.