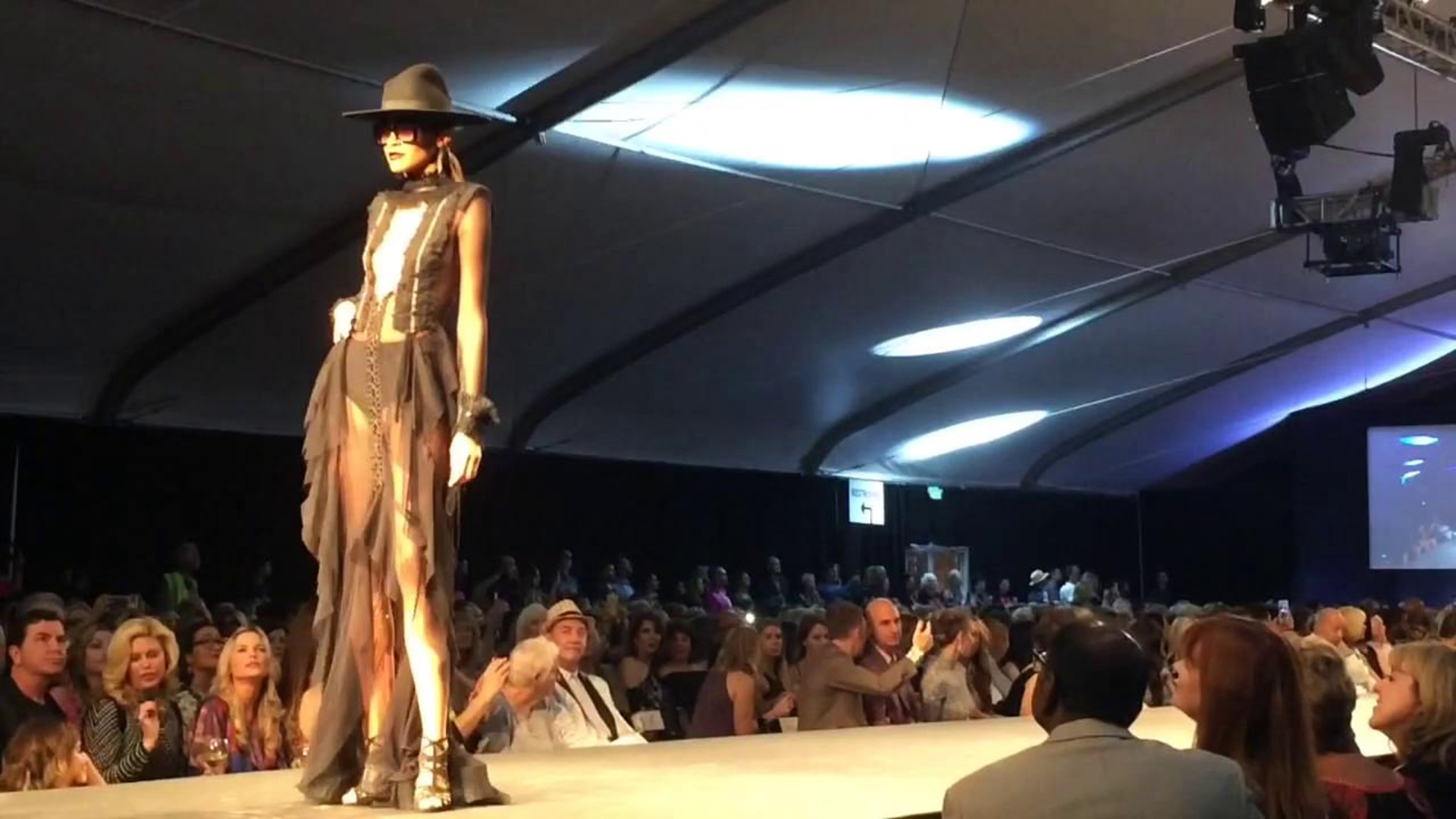 Credit: Courtesy photo.
Frank Cazares from Palm Springs made this dress out of 53 rolls of Quilted Northern toilet paper. It is a finalist in the 14th Annual Toilet Paper Wedding Dress Contest. (June 2018)

A California costume designer has found another use for toilet paper and it has nothing to do with personal hygiene.

The ombre gold wedding dress resembles crocheted vintage lace rather than toilet tissue and and is a finalist in the annual National TP Wedding Dress Contest.  That means his creation is one of 10 dresses selected from thousands of entries nationwide vying for a grand prize of $10,000. Second place wins $5,000 and third place $2,500.

More: Balenciaga sewed a button-down shirt onto a T-shirt and people aren't having it

Cazares’ toilet paper dress is called Esperanza, which means hope in Spanish and is inspired by his grandmother by the same name.

“For my first gift as a newborn, my grandmother crocheted me a blanket and so I wanted to mimic that design in the dress,” he said.

The competition also has a fan favorite category with a prize of $1,000. This is where the public and those who want to support Cazares get to vote for their favorite dress by going to tpdresscontest.com.

If he wins the grand prize, he said he plans to go back to fashion school and pursue bridal wear.

"I'm a big supporter of sustainable fashion so that’s one thing I’m also trying to work with," he said.  “I'm trying to use more recyclables to make more fashion couture gowns or pieces."

His toilet paper dress features 1,000 little flowers individually cut and sewn together to create the bohemian look. He also used 10,000 yards of different tones of gold thread to sew it.

Credit: Courtesy photo.
Frank Cazares from Palm Springs made this dress out of 53 rolls of Quilted Northern toilet paper. It is a finalist in the 14th Annual Toilet Paper Wedding Dress Contest. (June 2018)

In addition to the toilet paper, contestants are only able to use glue, tape and needle and thread. They cannot use buttons or zippers or hooks and eyes, which adds to the challenge.

Since his dress has a crocheted see-through look, Cazares used nude medical tape as the lining. The look also includes an elaborate and delicate looking flower headpiece with roses and lilies inspired by Frida Kahlo and the strength of Latina women.

“This year I did challenge myself to make something that was very wearable and that had a flow," he said. “It's hard to reinvent yourself every year. Every year you just try to be different."

More: How prom fashion has evolved from ubiquitous gowns to include DIY and gender fluid options

This is the fifth time he’s entered the contest and the fourth time he’s made it to the top 10. He’s never won, though.

Cazares and the other top 10 designers will travel to New York City to participate in a fashion show finale on June 20 at Kleinfeld Bridal. Fan favorite voting closes at 9 p.m. on June 18.

Credit: Courtesy photo.
Frank Cazares from Palm Springs made a dress and this floral headpiece out of 53 rolls of Quilted Northern toilet paper. It is a finalist in the 14th Annual Toilet Paper Wedding Dress Contest. (June 2018)

During the finale in New York each design will be evaluated by a panel of judges that include: Mara Urshel, owner of Kleinfeld Bridal; Danielle Jonas, reality television personality and wife of Joe Jonas;  and representatives of Cheap Chic Weddings and Quilted Northern.

Cazares said he's always been a crafty person and is inspired by cinema.

More: The early '00s are back and you're going to want to stock up on tube tops and spaghetti straps

“The movie the 'Wizard of Oz' inspired me to be creative and think outside the box. So I really look up to cinematography and creating a look for movies and theater. That’s how it stared," he said.

He looks forward to being in New York and seeing all the other competitors in person - many are return contestants like him —  but hopes his is the one that hold's up in the end.

"It's inspiring to see everyone else's work.  I call them my toilet paper family,” he said.