The VA clinic currently located in Beaumont has been working out of tents since the building flooded during Imelda. 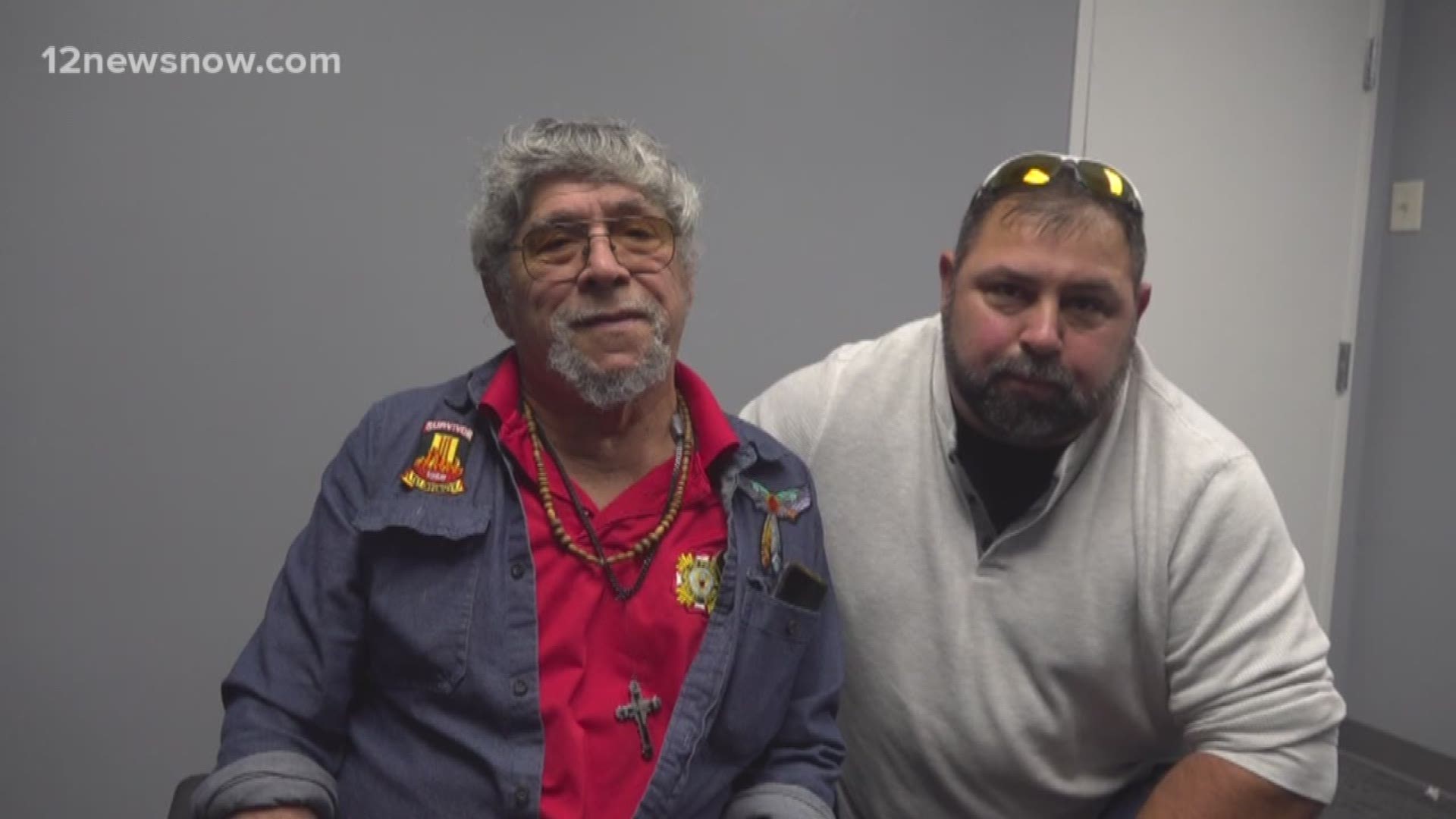 BEAUMONT, Texas — State Representative Dade Phelan is on a mission to provide better medical for our Veterans in Southeast Texas. He started a petition for President Trump to establish a VA hospital in Southeast Texas. It needs 100,000 signatures by February 8th to get a response from the White House. Wednesday, it had a little more than 2,000.

The VA clinic currently located in Beaumont has been working out of tents since the building flooded during Imelda.

Joe Gongora served on the front lines in the Vietnam War. He fought alongside the Marines and Air Force, and was awarded a bronze star for his service.

"68-69 Tet Offense, that's when everything went berserk-y," Gongora said, with a laugh.

After the war the Beaumont native came back to southeast Texas, got his GED and went to carpentry school. He was able to work on several exciting projects at that time, including Spindletop. Gongora doesn't talk much about his experience in the Army, but his hearing loss and PTSD serve as daily reminders.

"My hearing I think was about it then (immediately after the war), bombings and stuff, I was close to them," he said.

Gongora later developed problems with his legs, as well as Alzheimer's and heart problems. His doctors deemed him unfit to make decisions for himself medically, financially, and to drive. After taking care of our country when we needed him all those years ago, he's now being taken care of by his son, Jason and his daughters.

"He's risked a lot, and I mean to go over there and serve for our country, for the people who freely go up and down these roads everyday, were proud of him and I'm proud of everybody who serves," said Jason.

Gongora used to go to the Beaumont VA clinic before Imelda closed down it's building. Since then, Gongora hasn't been able to get the care he needs.

Danny Shine, the site manager of the Beaumont 'alternate care site' says they've been operating out of 'mobile assets,' and providing clinical services to our veterans. They expect to have their building re-opened by mid-April. Shine assures that they're doing everything they can to provide the best possible care for our veterans.

On location, they've maintained their primary care managers, clinical appointments, lab work, and mental health services. For everything they aren't able to do on site, Shine says they're giving the patients referrals to their main hospital, or other local clinics in the area.

"We are anticipating getting back in the building, but yet we are resilient in what we're doing today," Shine said, "we're providing care from portable assets, and the veterans have accepted that and we're very grateful that they trust us with their care, and we will continue to provide the best care that we can."

Gongora says he really liked his VA doctors when he had them, and that the everyone became like a family to him. Since Imelda, Gongora has had to mostly rely on care from local doctors through his insurance. He says the local hospitals are nice, but it would help out him and other veterans if they had their own hospital.

"They charge you an arm and a leg for something, it's kind of robbery like to the soldiers, to all the troops," Gongora said.

His son says a local VA hospital would make things much easier on his family. He feels every major city needs one, especially with so many homeless veterans without someone taking care of them like his dad has.

"I mean, we've got hospitals galore all over the place, and why they can't afford one for the veterans, I can't understand that," Gongora said, "They've got a whole bunch of hospitals coming up left and right, and they don't think about us at all."

They're both encouraging everyone to sign Phelan's petition for a local VA hospital.

Establish a New VA Hospital in Texas!
More than 1.6 million veterans in Texas lack reliable healthcare options. Texas desperately needs additional VA hospitals to properly care for our veterans. There are two options available to establish a VA Medical Inpatient Hospital that would serve thousands of veterans in Texas and Louisiana: Baptist Orange Hospital and St.

"We've got to stand up for what we need, that's my main thing just getting accross to them," Gongora said.

"I encourage anybody with a heart to sign it," Jason said, "I don't see how anybody couldn't care enough to sign that petition, and it's good to see a representative that will come forth, and make the exchanges.

Gongora isn't the only local veteran who feel southeast Texas needs it's own hospital. Phillip D. Blackmon and Darin Lopez shared their own accounts:

As veterans, we have NEVER had adequate resources available in the Southeast Texas area for healthcare.  The current VA Outpatient Clinic here in Beaumont is just that, a clinic that can offer basic services for a primary care visit, flu shots, some prescription drugs, mental health, and x-rays. If a veteran needs additional specialty care, their only option is to drive to Houston which can take up to 4 hours of a veteran’s day depending on where they are coming from in SETEX.  Many who work jobs or don’t have the ability to make the journey to Houston due to their health, are impacted by the inconvenience of not having better facilities closer.  Veterans needs are not being met in SETEX because of the geographical challenges.  SETEX veterans need to have a VA hospital in the area so they can get the medical help they deserve.  Our current VA clinic has been shut down twice in the past 3 years due to Hurricane Harvey and Tropical Storm Imelda forcing the Outpatient Clinic to operate out of tents.  Imagine watching a veteran who is wheelchair bound or needing the assistance of a walker lose their dignity by requiring assistance to crawl in and out of a porta potty, with the door wide open, to use the restroom; he deserved better than that.  The current VA Outpatient Clinic is unsatisfactory due to its susceptibility and history of being impacted by severe storms; it will happen again and the fact we don't have politicians addressing this issue is tragic.  We all served our country honorably with the promise our country would take care of our medical needs due to service-connected disabilities, currently and sadly, that is a promise that is not being met. -SSG (R) Phillip D. Blackmon

Darin Lopez, a Veteran Advocate, commends Congressman Babin and Representative Phelan on initiating conversation with the President about the local VA health care facilities that could greatly improve care in the veteran community.   Although I frequent the Beaumont facility, I personally have not had any issues there.  That may be due the location being equipped for most of the reasons I visit.  From experience, I must admit that the staff at the facility is one of its best offerings. It’s comforting to be readily assisted when the news across the country may suggest otherwise.Currently the clinic is operating from outside the walls of the building in temporary tents since suffering damages from Imelda. There are definitely some short comings when looking at the facility capabilities even prior to Imelda, especially when speaking long term care capabilities.  That may be one of the most important aspects of a new VA facility among other priorities such as an emergency center and other high demand services that data suggest would complement the local veterans needs.  However, at this time if a veteran needs an Emergency Center they are allowed by the Choice Program to visit wherever they choose and the VA picks up the bill.  This program personally saved my life once this year when I was directed to “any emergency center”  from a VA nurse for abdominal pain.  I had to stay a week, but that week is much better than the other options. For this reason I know the choice program serves our Veterans well.   In any light, a new VA facility seems to be a no brainer when you consider the number of veterans in Southeast Texas but the buildings in Port Arthur and Orange do not make reasonable sense aside from funding and budget.  The buildings are old and may come with a hefty price tag of problems.  I don’t believe an improvement begins with old problem ridden real estate.    We will continue to have more veterans looking forward and I would imagine that at some point breaking ground on new construction would be feasible.  Additionally, I believe it should be located where most people are populated and for those who have to travel from surrounding areas Beaumont is central to them all.  Traveling from any part of a Southeast Texas is more efficient than driving to Houston and dealing with traffic.  Plus they have many more patients to see which creates long wait times for appointments.  With just these few considerations I believe that Beaumont is the top pick and can deliver our best effort.   It was nice to see Congressman Babin who is also a veteran take initiative and visit the facility after the storm.  It is good to know your local leadership genuinely cares about its constituents. Furthermore I am glad to see Representative Phelan take the lead and get the conversation started.  I hope to see President Trump respond positively as he has in the past regarding our veterans.  In my opinion, our current President is one of the biggest advocates any veteran has ever had.