United States service men and women encounter challenges throughout the course of their military careers. Post Traumatic Stress Disorder is a battle that sometimes continues even after a veteran puts away their combat boots.12News sat down with a Jefferson County man who served two tours in Iraq and now has PTSD. The vet is asking lawmakers to let him use pot as a treatment option. 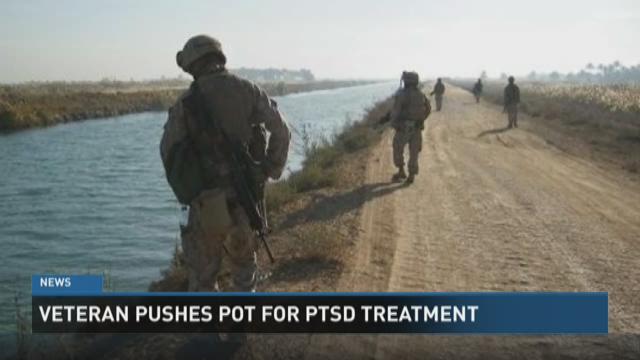 United States service men and women encounter challenges throughout the course of their military careers. Post Traumatic Stress Disorder is a battle that sometimes continues even after a veteran puts away their combat boots.

In 23 states, medical marijuana is allowed for treatment of PTSD. Texas is not on that list. A lawmaker from San Antonio is wanting to change that.

Admitting to experimenting with marijuana in the past to ease PTSD bouts, and with the practice being illegal in Texas, the former Marine did not want to be identified by name. The veteran is sharing his story because he believes medical marijuana could be the difference between life and death for veterans across the nation battling PTSD.

“I’ve been blown up seven times. I killed my first man three days before I turned 21,” said the veteran. “I want to let people know what we go through on a daily basis.”

As a corporal in the Marines, the Jefferson County man spent 2006 and 2007 in Iraq. Since getting out of the military in 2008 he's been working to adjust to civilian life.

“I wake up during the night covered in sweat, scared out of my mind... I'm at that point where I just want to end it."

He says it's been a struggle to find relief from the torment.

"We're fighting a losing battle," explained the veteran. "Twenty-two veterans a day take their own lives. Any other group of people that would be unacceptable. But for some reason for our veterans, it's ok. We didn't fight a war alone, we shouldn't fight this battle alone."

This vet is asking Texas lawmakers to step up and make medical marijuana a legal treatment option for military members with PTSD.

"If the government would legalize it, I could take a couple of puffs of something and all of a sudden my problems are gone."

He wants to find a solution and has already reached out for help.
The vet has tried six or seven medications prescribed through the local Veterans Affairs clinic.

Another devastating side effect has been complications starting a family.

The vet and his wife have been trying to have a child but he says the medications are making it difficult.

In an analysis of four commonly prescribed medications for PTSD, sexual problems were included in a list of side effects.

Other common side effects listed by WebMD were diarrhea, dizziness, trouble sleeping and vision problems. The website offered dozens of possible complications ranging from common to more rare.

The U.S. Department of Veterans Affairs published an article written by Marcel O. Bonn-Miller, Ph.D. and Glenna S. Rousseau, Ph.D., discouraging veterans to use marijuana to treat PTSD because:

"Research suggests that marijuana can be harmful to individuals with PTSD... studies have not been conducted to evaluate the safety or effectiveness of medical marijuana for PTSD."

Other concerns include the potential for chronic bronchitis, extended use leading to addiction and that marijuana could cause problems with brain development in juveniles.

Another study done by researchers in Denmark links pot use to lower sperm count; ironically a potential barrier to growing a family.

These cons are something the veteran says he would take over the list of side effects on his pill bottles.

Dozens of other states allow PTSD to be treated with medical marijuana. Veterans Affairs is not required to cover the cost. Federally, marijuana is still illegal and classified as a "Schedule I" controlled substance. This means private insurance won't pay for it, even in states that have decriminalized pot.

In states where all adults 21 and up are allowed to buy recreational marijuana, there's still a cost difference if you get a note from the doctor. A blog in Colorado estimates it costs a medicinal patient $329.88 a month to treat PTSD with marijuana but a recreational purchaser using edible style pot would have to shell out $654.64.

For the Texas born and bred veteran, the Lone Star State has a lot of catching up to do.

"How many of my brothers would still be alive if they had medical marijuana?"

He says veterans lives are hanging in the balance and it's up to lawmakers to send a life-raft.

12News reached out to Texas lawmakers to see where they would stand on a bill allowing medical marijuana as a legal PTSD treatment option. As of press time, none have offered up comment.

Texans wanting to see Senator Menédez's comprehensive medical marijuana bill pass through the state legislature are encouraged to call up their local representative and let them know.