Texas may have given out the most doses, but federal data suggests it is not the best state as far as the vaccine rollout is concerned. 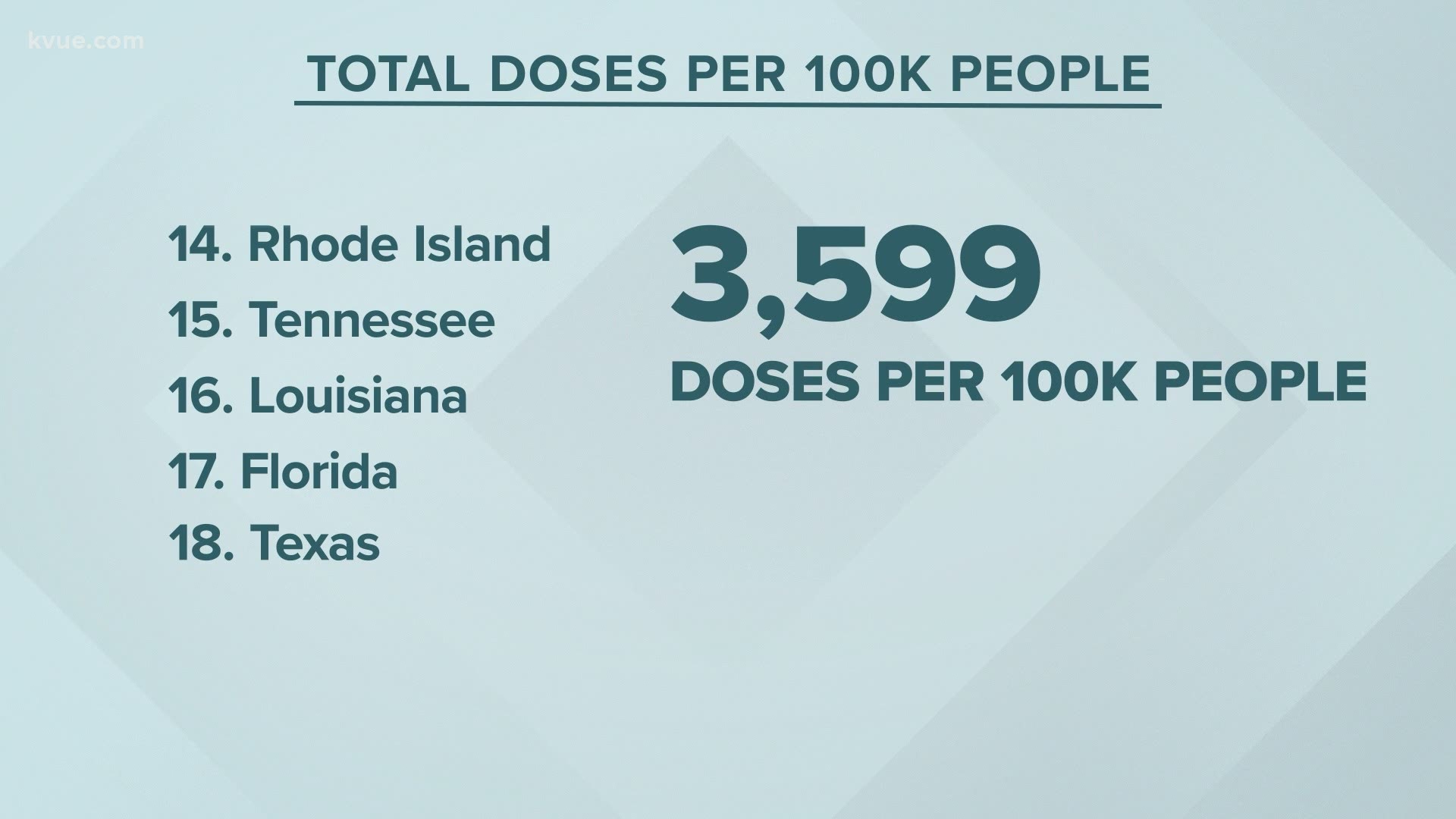 AUSTIN, Texas — On Thursday, Gov. Greg Abbott and the Texas Department of State Health Services (DSHS) announced that Texas has become the first state to administer more than 1 million doses of the COVID-19 vaccine.

This comes exactly one month after the first doses arrived at vaccine providers across the state on Dec. 15.

In a press release, Gov. Abbott's office said Texas is now the national leader in vaccinations. They also said Texas is among the top 20 states for doses distributed, and Texas ranks number one for the percentage of doses administered.

However, these statements need more context.

According to the latest CDC data, it is true that Texas is the first state to reach 1 million doses administered. But compared to the state's population, Texas falls farther down the list of states' vaccine rollouts.

Texas is 18th among the states in vaccines administered per capita with about 3,600 doses administered per 100,000 people. Texas also ranks behind D.C., and a few other U.S. territories – the Northern Mariana Islands, American Samoa, and the Republic of Palau.

And while Texas is now administering about 33,000 vaccines a day, that's not nearly enough to vaccinate Texas by the end of the year. At this rate, it would take nearly two years to vaccinate all of the eligible population – about 1 million a month for 21 months. The vaccines currently authorized in the U.S. are only available to people 16 years of age or older.

“Texas is leading the way for our nation once again,” said Gov. Abbott in the press release. “This is the biggest vaccination effort we have ever undertaken, and it would not be possible without the dedication and tireless efforts of our healthcare workers. We still have a long road ahead of us, but Texans continue to prove that we are up to this challenge.”

Currently, voluntary vaccination continues across the state for frontline health care workers, nursing home and assisted living facility residents and Texans over the age of 65 or with chronic medical conditions. The State of Texas receives more vaccines from the federal government each week and expects the weekly amount to increase as time progresses.

A Health and Human Services spokesperson provided the following statement regarding vaccines in other states:

DSHS data shows that Texas has a history of not being the most vaccinated state. In 2019, only 7,441,205 vaccines for various other illnesses were administered. Those numbers dropped last year, likely because of COVID-19, to 4,693,592.