Thursday they broke ground on "Veterans Village," a project to help homeless veterans get back on their feet. 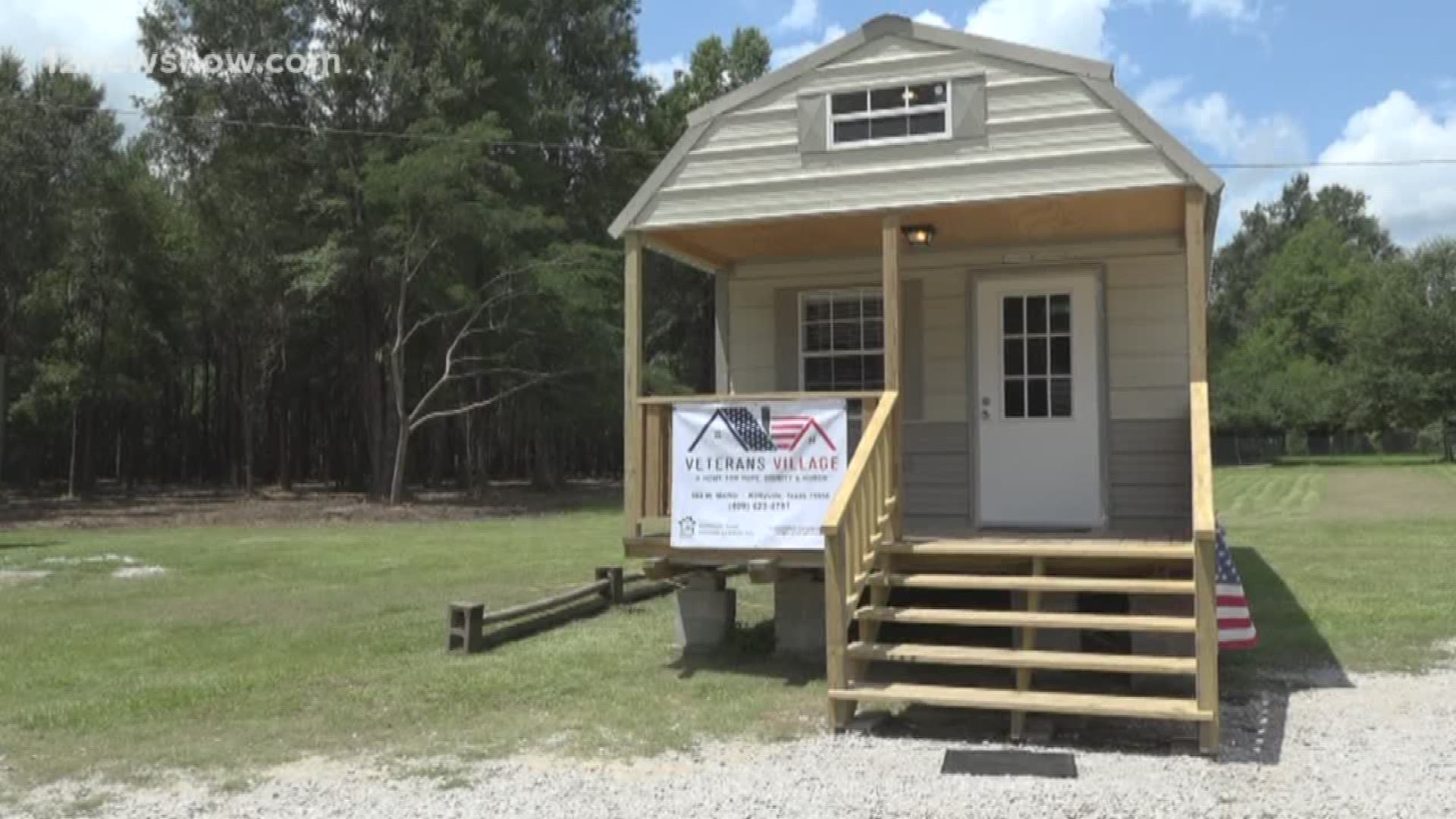 KIRBYVILLE, Texas — The Southeast Texas Homeless Coalition has big plans for "tiny homes" for homeless veterans. Thursday they broke ground on "Veterans Village," a project to help homeless veterans get back on their feet.

SETHC will build "tiny homes" and offer necessary services for homeless and near-homeless individuals and families. Veterans Village is the first initiative in a multi-phase project. Located near Pecan Grove Community Center, it's the first program of its kind in Southeast Texas.

The program is modeled after similar successful projects in Austin and Kansas City. It will be a community of tiny homes on 5.6 acres donated by Pecan Grove to SETHC. They'll be no larger than 350 square feet, and equipped with all necessary conveniences, along with a sense of security. The plan is to start with six one bedroom and 2 two bedroom homes for Veterans Village.

John Detroy is an army veteran, and volunteered full-time for the construction of the first 34 X 12 tiny home. Before learning about the Veterans Village project, he had plans to do something similar on his own 80 acre property just outside of Kirbyville.

Detroy got connected with the SETHC, and he decided to join them. His goal was to get the homeless into housing as soon as possible.

In between serving his country and his community, Detroy was homeless.

"By choice, I stopped and took six months out of my life and went down and met some other vets where they were camped at," Detroy said.

Detroy said he hit a low point and wanted to take some time to think about his life. He said most of the veterans were not there by choice.

The time he spent helped tremendously. At the end of the six months, Detroy worked with councilors and stayed at a veteran's hospital for two weeks. He said they helped him get back on his feet and get going again, but that's not what happens for everyone.

"Looking back, the emotions run so deep," Detroy said.

Detroy said there are lots of reasons veterans become homeless, like mental illness. Survivors often have a hard time coming home, because they lost people that cannot be replaced.

"I'm very familiar with the problems they have," Detroy said.

President and CEO of the SETHC, Bryan Landers, said it's difficult to know how many homeless veterans are in rural areas like Kirbyville, but the need is huge. Veterans will undergo a thorough screening process and background check.

"You have to be somewhat lenient when you're vetting them, but you can't just make it so stringent that nobody's going to qualify," Landers said.

The SETHC understands they will have some issues, like substance abuse and mental health. The coalition will coordinate on-site services to help stabilize, address and treat the underlying cause of the Veteran's homelessness and other issues. Social services will provide mentoring, case management and counselling.

"We want to be able to proudly say that there are no homeless veterans," Landers said.

They have room for 47 more tiny homes on the property. In order to keep going, Landers said they need to raise more money and do a lot more work. They need donations of money and time, as well as appliances and tools.

Lowe's in Jasper has an entire list of everything that goes into the tiny homes, if you're interested in helping out. You can also contact SETHC board members, the housing Kirbyville Housing Authority, or call him personally at (979)-595-8410.