He was known for asbestos and tobacco litigation and in 2010 was called a “legal legend” by Texas Lawyer magazine. 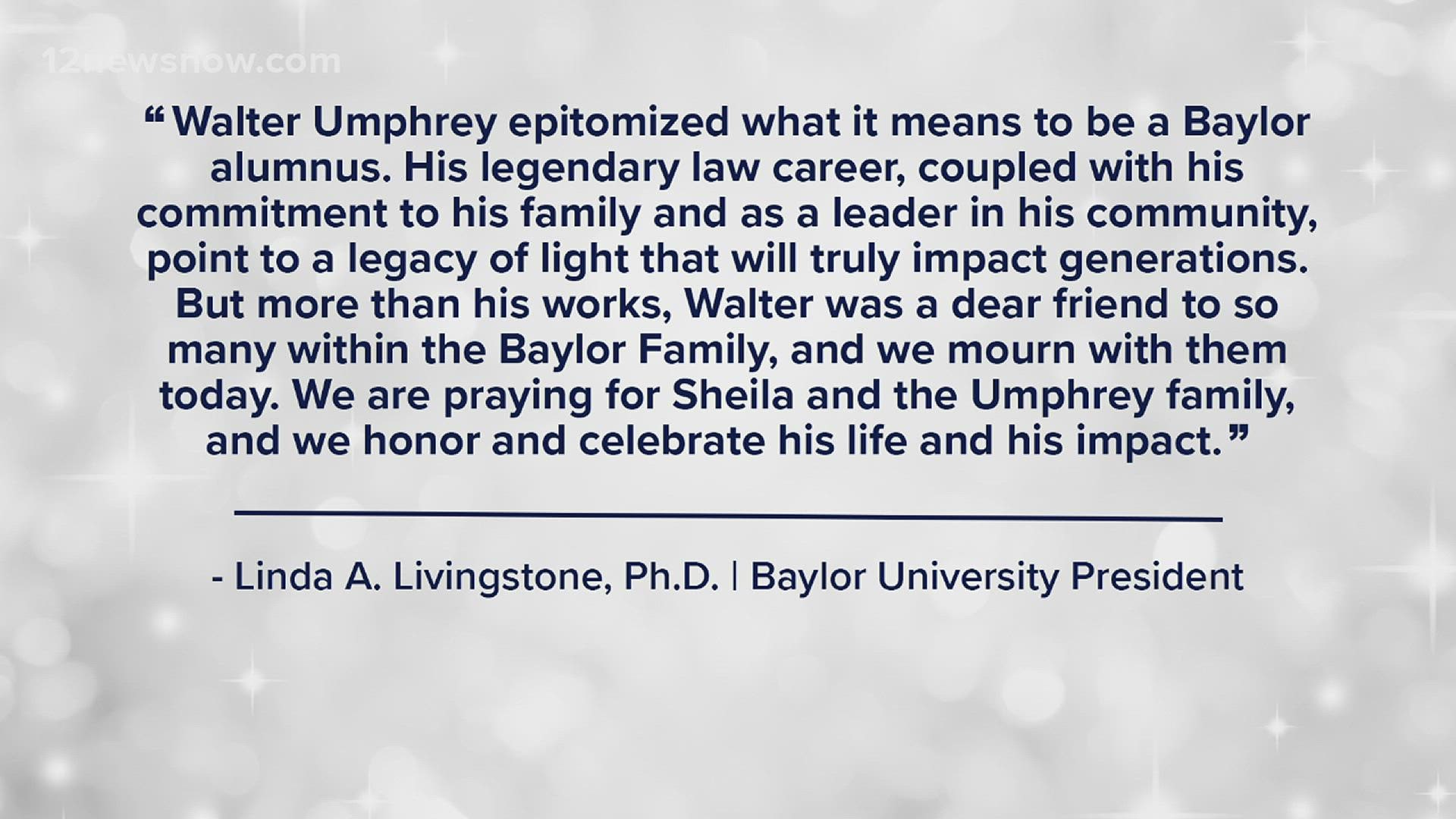 BEAUMONT, Texas — Prominent Southeast Texas attorney and philanthropist Walter Umphrey has passed away. He was 85 years-old.

He was known for, among other things, asbestos and tobacco litigation and in 2010 was called a “legal legend” by Texas Lawyer magazine.

Born in Port Arthur, Umphrey attended Southern Methodist University on a football scholarship and later earned his bachelor’s degree at Baylor University in 1959.

He then went on to receive his law degree at Baylor in 1965.

The firm released a statement on Tuesday...

“Our firm is deeply saddened by the loss of our founder, Walter Umphrey. He built the Provost Umphrey Law Firm by helping those who could not help themselves, speaking for those who had no voice and representing those unable to stand on their own. He stood up for hard working men and women against Big Business, Big Tobacco and the Insurance Industry. He leaves behind a legacy of service and commitment that we at Provost Umphrey will always strive to honor”.

Umphrey, in 1998, was the lead counsel of a five-man “dream team” of lawyers chosen to represent the State of Texas in its lawsuit against the tobacco industry according to his bio on ProvostUmphrey.com.

He led the team to win the largest civil suit settlement in U.S. history with a $15.3 billion award to the state as well as $3.3 billion for the state’s legal fees.

Umphrey was also a philanthropist and supported many civic and community including Lamar University, Baylor University.

In 2005 he and his wife, Sheila, donated $5 million to build the Sheila Umphrey Recreational Sports Center which opened in 2007. After it’s opening students and faculty at Lamar began referring to the facility as “The Sheila.”

When Lamar University brought back football, he and his wife partnered with the law firm to provide a $4 million grant to the program.

In 2011 the Umphreys donated $1 million to the Humane Society of Southeast Texas to build a new facility.

"Sheila and I have always been animal lovers" Walter Umphrey said at the time, "and we noticed that the Humane Society of Southeast Texas building was in a state of disrepair. We wanted to help, and are proud to donate to help build a new facility for them.”

Umphrey also served on the Texas Parks and Wildlife Commission and while doing so bought a chunk of land on the tip of Pleasure Island at Mesquite Point .

He donated the land to Jefferson County and it eventually became what is now Walter Umphrey State Park.

At his alma mater, Baylor University, in Waco, his name can be found on Baylor Law School’s Sheila and Walter Umphrey Law Center.

“Walter Umphrey epitomized what it means to be a Baylor alumnus. His legendary law career, coupled with his commitment to his family and as a leader in his community, point to a legacy of light that will truly impact generations. But more than his works, Walter was a dear friend to so many within the Baylor Family, and we mourn with them today. We are praying for Sheila and the Umphrey family, and we honor and celebrate his life and his impact.”

In 2012 Umphrey and his wife, Sheila, funded the construction of the Sheila and Walter Umphrey Pedestrian Bridge which is alongside the Umphrey Law Center and crosses the Brazos River leading to McLane Stadium.

Umphrey is survived by his wife of more than 61 years, Sheila, his son, Bart and daughter-in-law Laurie and his daughter Paige and son-in-law, Darren.

He is also survived by eight grandchildren.

Funeral services for Umphrey are pending with Clayton Thompson Funeral Directors in Groves.

1 / 5
KBMT
Photo of the empty office of Walter Umphrey