Izzabella Miller was born without an arm and has gone through dozens of prosthetics, but one teacher says this one will be much different. 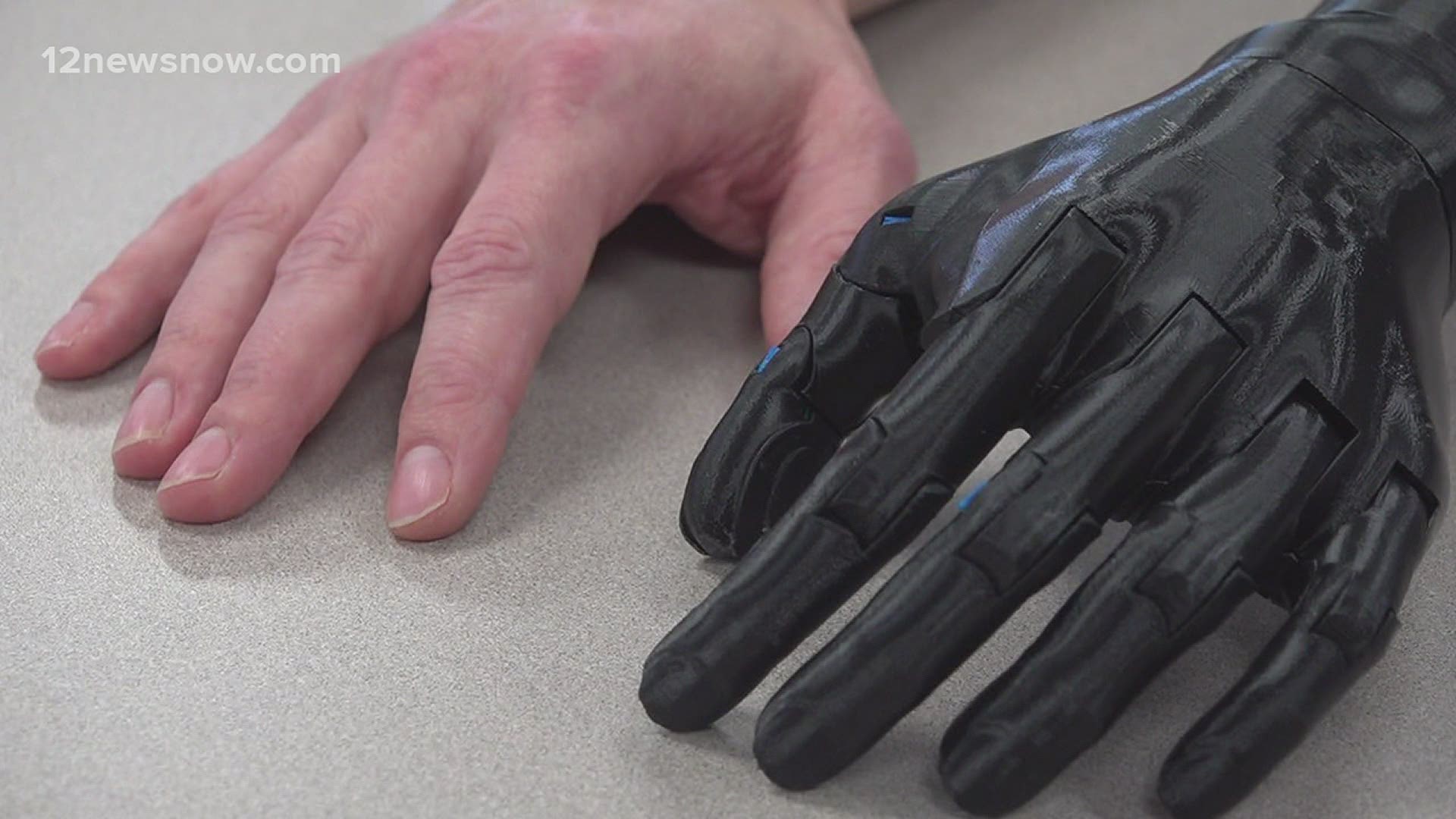 BEAUMONT, Texas — A Southeast Texas classroom is making life easier for a fellow peer. Students in a 3-D print and design class at Sabine Pass Independent School District are perfecting a prosthetic limb for an aspiring cheerleader in the sixth grade.

Izzabella Miller was born without an arm and has gone through nearly 60 prosthetics. "I wear it because it’s cool, and it can help me do stuff,” said Miller.

One Sabine Pass ISD technology teacher says the new prosthetic the class is making will be much different.

Director of technology integration Scott Hagedorn came up with the idea to make Miller a prosthetic arm. Although most of the magic happens inside the classroom, Hagedorn says he’s always trying to get his students to do projects that can impact the community.

“The year before, we had controllers for students with disabilities, so I gave them a whole random set of different things that they had to make,” Hagedorn said.

This year, his students are working on yet another project that will be used in the real world.

“I was presented with the idea and Hagedorn had given me the project to do," Sabine Pass ISD senior Caleb Morgan said. "I started looking around for all these files and different arms that there are. I pretty much put it all together.”

The students have access to hundreds of files online that allow them to make more affordable prints such as learning blocks or those remote controllers for children with disabilities.

Morgan is spearheading the prosthetic arm project for Miller and says the arm took nearly an entire school semester to make. But there’s another reason why this project is special to him.

“...With this, there’s someone at the same tiny school that I’ll pass almost every day and it’s like you can see the impact it has, so it’s really cool,” Morgan said.

So, a high school classroom is making a strong prosthetic arm for a sixth grader, how does that work? It starts with a computer program and a lot of measurements.

“We use Autodesk Fusion 360, and that’s what we use to make our file. Basically, you draw out sketches and you take a 2-D sketch and you can sketch it into a 3-D model,” Morgan said. “In the program, I also had to scale it, so I had to measure the arm that she has, like how long her forearm is, how long everything is, the diameter and stuff. So, I could put all that in, and then it would render it into the file that we would need.”

As mentioned, Miller has had dozens of prosthetics throughout her young life, but they didn't hold up. “I broke all of them because they weren’t strong,” Miller said.

But, the students behind this prosthetic project are up for the challenge. They’re using a stronger material for the arm that’s built to last. “ A lot of the printers you'll see will print with what they call PLA, which is plastic close to a Lego plastic. This one is actually printed with a tough PLA, which is going to be a lot stronger than any of those other types of plastics,” Hagedorn said.

To test the material Morgan tried out this tough plastic with personal experiment. He printed two rings out of the same material used to make Miller’s arm. He took the rings home and placed them on a pull-up bar to test out the material’s durability.

“I did pull ups on them, and I did 5 with both of them and then 5 with just one and both times, it held my weight. So, I’m assuming a bunch of big pieces like this that are even thicker and built stronger than just the little ring, those will be able to really hold her weight and allow her to do a lot of things that she might not have been previously able to do,” Morgan said.

It’s important that the arm is as reliable as possible, considering Miller is planning on trying out for the school’s cheerleading team next year.

“The first thing she wanted to be able to do was a handstand and cartwheel. Well, if you do that with typical plastic, it’s probably going to break with middle school weight or high school weight, so we had to print that with a tougher-type material,” Hagedorn said.

Morgan said the students would work on the arm project in every class period for six weeks, which is about 60 hours. Making such an intricate arm is a tedious process that requires attention to detail.

“All of it is printed in different pieces, so the finger, one joint is one print, so every single thing is a different file. It doesn’t just print all at once and sometimes you’d go to print a bigger piece like the entire forearm and then, it would take a while to render that,” Morgan said.

Waiting for measurement files to render wasn’t the only factor that played into the stop-start process. The Sabine Pass senior would also reach learning curves while waiting for the projects files to render.

“I would be taking and gluing the pieces together, and we had to get some screws that would fit and wiring it, like fishing line, so that’s a good chuck. We tried using some nylon string, and that ripped like four times before I moved on to fishing line, and that’s a lot stronger,” Morgan said.

The students are still working to provide Miller the strongest arm yet, but considering the activities that Miller wants to participate in, parts attached to the arm must be more bionic.

“You see those little blue joints, that’s actually done with a flexible filament, so you have to have a different type of printer that can actually print the flexible filament,” Hagedorn said. "And it gets more springy and it works like any tendon or anything else like that.”

“They’re basically just rectangles that hold the fingers in place, and when ever you bend it, it’ll pop back,” Morgan said.

For Miller to have a chance to embrace her school spirit, the class is figuring out how to make special accommodations to those finger and joint areas.

“Whenever she bends it, the fingers stay. And whenever it goes back out, the fingers still stay so she has to just [push] to open up the hand again, which we just need to tighten it to the point where it’ll pop back out every time the joint moves, and it’ll be more natural,” Hagedorn said.

As the class continues perfecting the arm according to Miller’s needs, there’s the inevitable concern of growth. Hagedorn says parents are usually hesitant to continue buying their child durable prosthetics made with metal or commercial grade materials because they can cost upwards of $10,000.

But, the class is known to use its skills and resources in order to help the community both domestic and abroad. Because many of the prosthetics shipped and made by students are simply projects, the class uses the school budget and grants from local refineries to ensure those who need high-quality prosthetics have access to them.

“Nice thing about this is even though this is a little bit more expensive material than the PLA, it’s still going to be a whole lot cheaper," Hagedorn said. You can print an arm for like 60-70 bucks, with all the parts and everything else and that makes it a lot more affordable for these parents to do it.”

And as long as Miller is a student within the district, the class will be able to make her high-quality prosthetics for free. And if it breaks, they'll just make another 3-D print of which ever part broke.

“The cool thing with this is when she gets bigger, we just scale it up a little more, take some more measurements, and it’s not very much money at all for her to have the opportunities that a lot of the other kids have,” Hagedorn said.

Miller has requested a white arm and says what her peers are doing is going to be “helpful, super helpful.”

"You think of just the simple things, being able to pick things up with two hands, she’s going to be allowed to do that. Or sitting in a classroom, if she’s wearing a long sleeve shirt, a lot of people won’t know that she has a prosthetic because it’s under there, and you won’t notice it,” Hagedorn said. 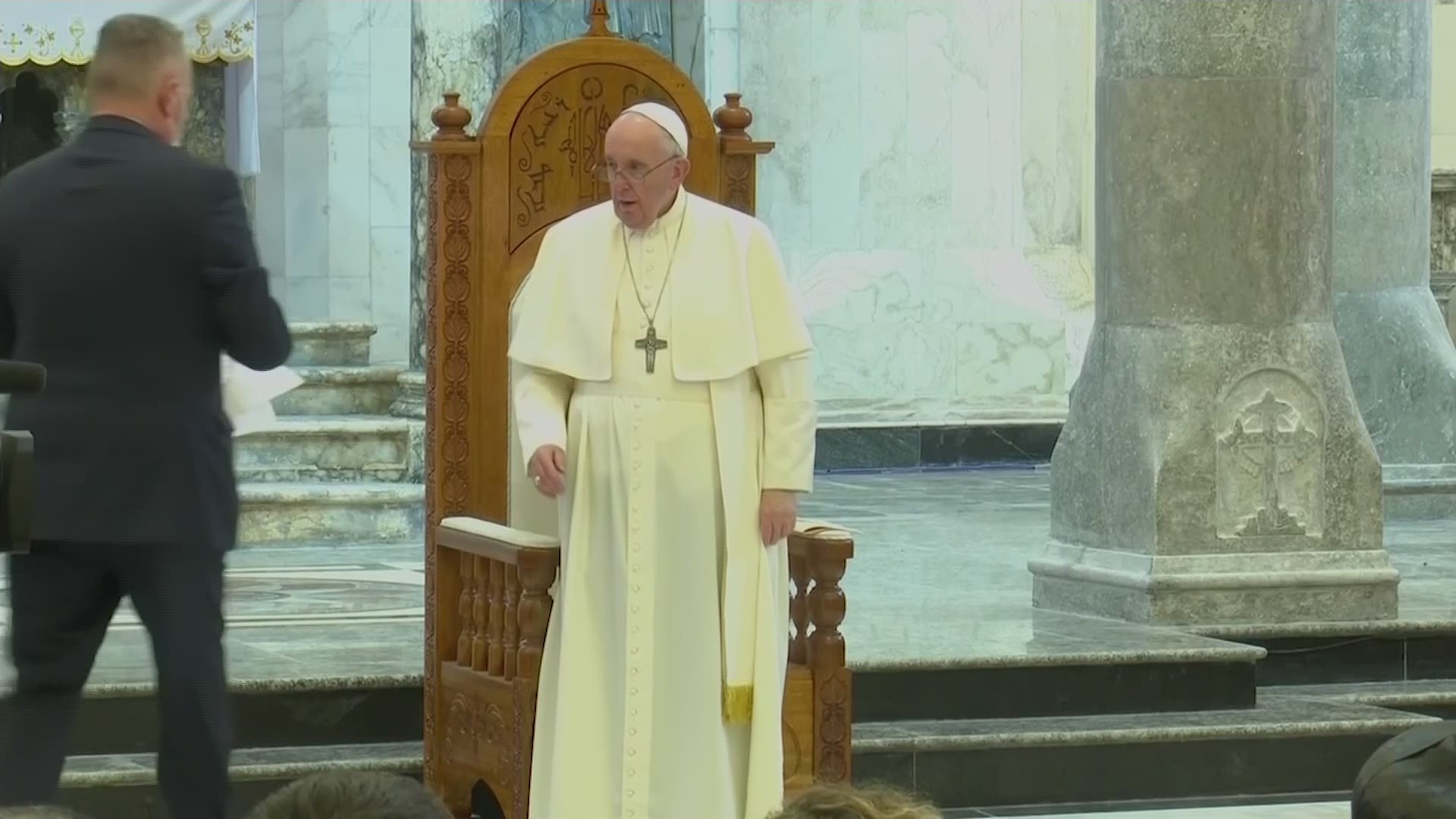