The Seattle Police Department allowed a KING 5 photographer inside the East Precinct as officers returned for the first time in nearly three weeks. 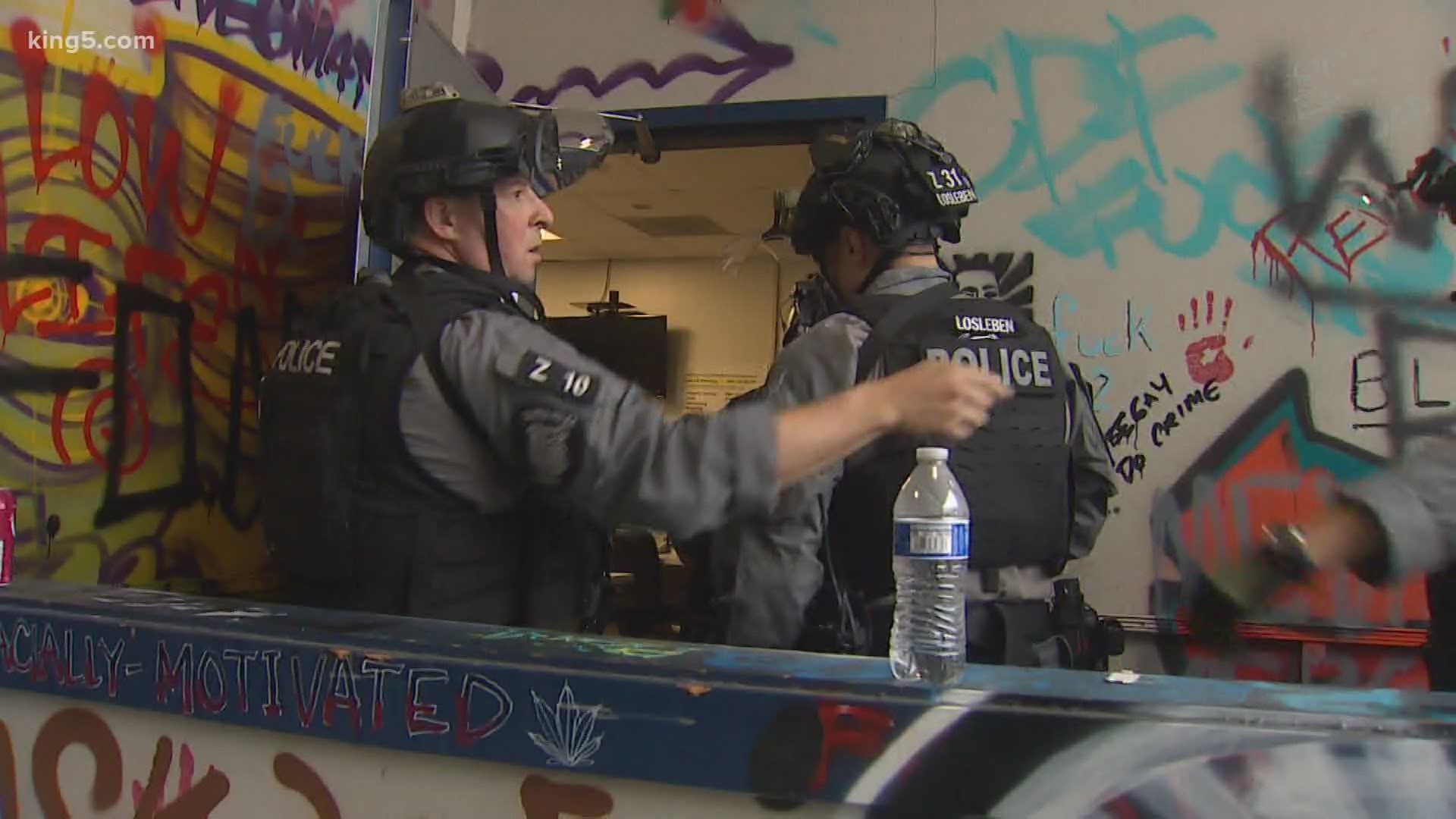 "We’re home!” An officer shouted soon after a side door at the Seattle Police Department’s East Precinct was opened by the SWAT team early Wednesday morning.

There was cheering and pats on the back as officers filed into the building they were ordered to abandon 23 days ago.

“Hey guys, thank you so much,” Chief Carmen Best told a group of officers assembled in one part of the building. “I walked the neighborhood and people are coming out.  They are just grateful and thankful that we’re here,” she said.

The scenes were recorded by a KING 5 photographer who the police department allowed to accompany officers as they took back the precinct that was swallowed up by the Capitol Hill Organized Protest (CHOP) zone.

“Police are utilizing this equipment because individuals associated w/ the CHOP are know to be armed and dangerous/may be associated with shootings (and) homicides,” said an SPD tweet Wednesday morning.

Protesters filled streets in Seattle and nationwide since the killing of George Floyd at the hands of Minneapolis police on May 25. Among other demands, demonstrators have called to de-fund and de-militarize the police.

RELATED: When protesters cry 'defund the police,' what does it mean?

Early Wednesday, police were in formation marching down Pine and 12th streets on Seattle’s Capitol Hill, making their first arrests.

“I am now issuing a public safety order to disperse. Failure to do so will result in your arrest,” said one of the numerous announcements police made before moving in and following Mayor Jenny Durkan’s order proclaiming the CHOP an unlawful assembly area.

Police made their first of approximately 30 arrests by 5:30 in the morning, with protesters claiming they were being treated unfairly.

Officers searched and removed tents and barricades along 12th and Pine.

By 6 a.m., police moved through Cal Anderson park, where tents have been dotting the playing field for weeks. Most people left the park without a struggle.

Police laid out some of the weapons officers say they found on people, including a machete, a knife, a baseball bat and a hatchet.

By 7 a.m., the SWAT team had entered the graffiti-riddled East Precinct and went room-to-room looking for intruders. None were found, and the officers who call the East Precinct home were allowed to return to the building about 30 minutes later.