The groups announced intent to sue in May 2019. Now that the state is suing, the groups no longer intend to sue the company. 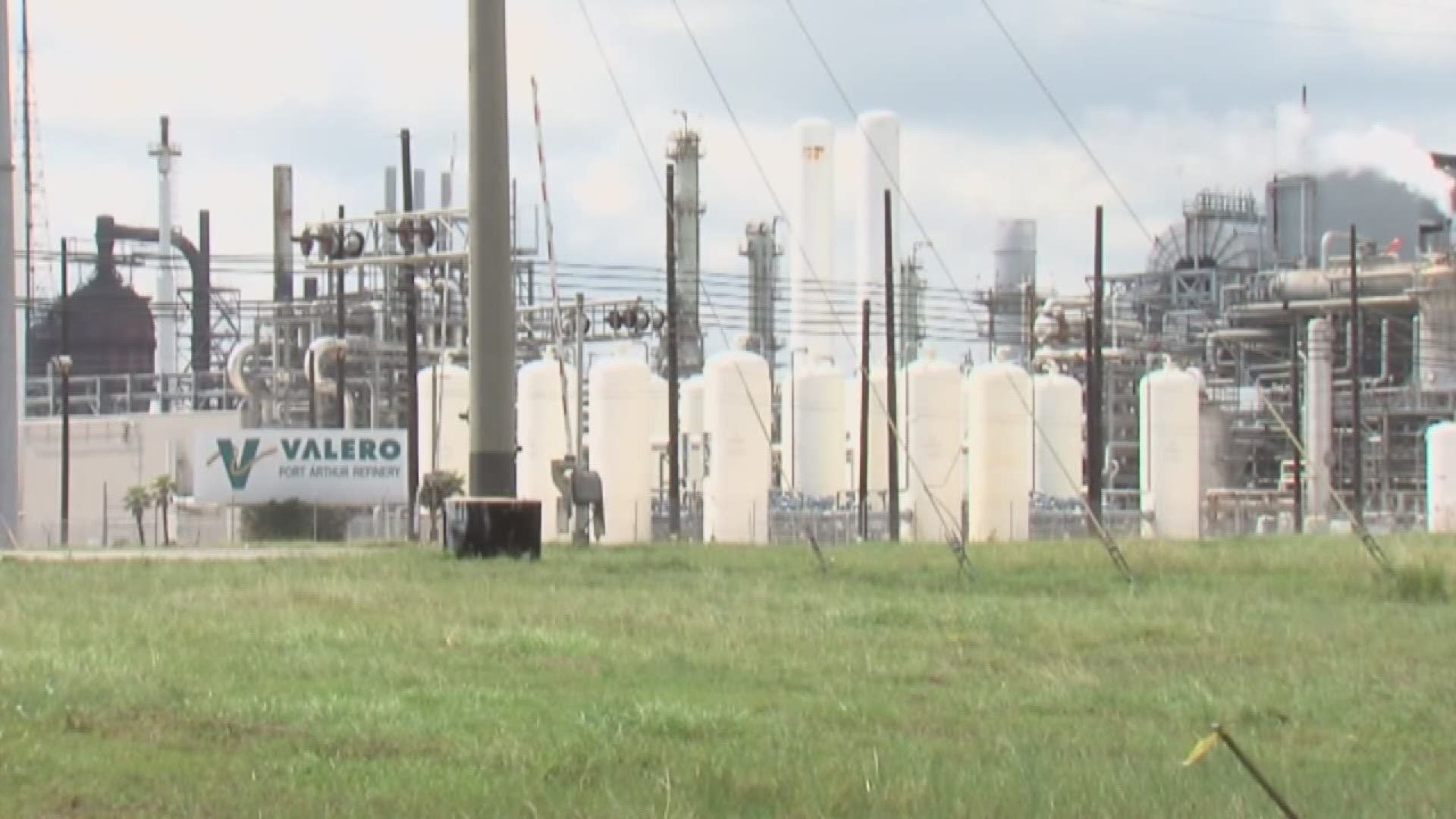 PORT ARTHUR, Texas — Several environmental groups that previously announced intent to sue Valero for an alleged 1.8 million pounds of air pollutants released from the company's Port Arthur refinery are now dropping the lawsuit as the Texas Attorney General files suit against the company.

Environment Texas, Sierra Club and the Port Arthur Community Action Network announced intent to sue Valero Energy Corporation and the Premcor Refining Group, Inc. in May for what they said was the illegal release of nearly two million pounds of air pollutants.

The Sierra Club issued a news release on Monday saying they won't sue since the state is filing suit.

The groups alleged the refinery violated the federal Clean Air Act by releasing the pollution over the past five years.

After the initial announcement of intent, the groups had to give the company 60 days before suing.

A release from the Sierra Club said the attorney general lawsuit comes 58 days after the May 22 announcement.

From a Sierra Club news release:

PORT ARTHUR, Texas – Environment Texas, Sierra Club, and the Port Arthur Community Action Network announced back on May 22 that they planned to sue Valero Energy Corporation and the Premcor Refining Group, Inc., in federal court for illegally releasing nearly two million pounds of air pollutants from their Port Arthur, Texas, refinery since May 2014 – unless the state or the federal government sued the companies within 60 days.

58 days after the groups sent their "notice of intent to sue," the state of Texas took up the challenge and sued, thereby pre-empting the citizen lawsuit under the Clean Air Act as long the Texas suit is "diligently prosecuted."

"We have been extremely critical of TCEQ's enforcement of clean air laws, so we will be watching very closely to make sure the State pursues its case aggressively and delivers better air quality for the hard-hit community of Port Arthur," said Luke Metzger, Director of Environment Texas, which has documented TCEQ's poor compliance record in a series of reports.

On July 19, Texas Attorney General Ken Paxton filed a lawsuit in state court, on behalf of the Texas Commission on Environmental Quality, against Valero and Premcor.  The State's lawsuit uses the environmental groups' notice letter as a roadmap:  each type of Clean Air Act violation listed by the groups is similarly listed in the State of Texas complaint.

"The federal Clean Air Act mandates a 60-day waiting period before private citizens or environmental groups can sue a polluter, so that the government agencies have a chance to file their own lawsuit over the same violations," explained National Environmental Law Center Senior Attorney Josh Kratka, who represents the groups.  "But now the Attorney General and TCEQ have to prove they're up to the challenge of diligently prosecuting Valero's violations."

The groups' notice letter alleges over 600 violations of numerous hourly and annual limits on emissions of sulfur dioxide (SO2), volatile organic compounds (VOCs), hydrogen sulfide, nitrogen oxides, particulate matter, and other air pollutants over the previous five years, as well as dozens of violations relating to improper operation of the refinery's large industrial flares.

"Sierra Club and Environment Texas have set the standard for what aggressive, effective enforcement should look like in our previous Clean Air Act citizen suits against ExxonMobil, Shell Oil Company, Chevron Phillips, and Pasadena Refining Systems," said Neil Carman, Clean Air Program Director for Sierra Club's Lone Star Chapter.  "We will continue to monitor the Valero case to see whether TCEQ can meet that standard."

The groups' earlier settlements and a court judgement have resulted in reductions in illegal emissions of greater than 90%, and civil penalties totaling more than $30 million.

"Valero's past and ongoing violations of their clean air permits have directly affected the quality of life, health, and safety of residents in Port Arthur and its West Side community," said John Beard, President of Port Arthur Community Action Network. "A slap on the wrist won't cut it –we are calling on the TCEQ to uphold our right to breathe clean air. Our lives, and our children's lives, depend on it."

According to the groups, Valero has released over 850,000 pounds of SO2 alone during emission events, without authorization, over the past five years. Exposure to SO2 can cause respiratory illness and worsen the effects of asthma and existing cardiovascular disease. Nitrogen oxides (NOx) and VOCs contribute to the formation of ground-level ozone (smog), another pollutant that causes respiratory problems, particularly among vulnerable populations such as children, the elderly, and those with asthma or cardiovascular disease.

According to the EPA, about 36,000 people live within a three-mile radius of the refinery, where there are also at least five schools, two community centers, four public parks, and over 20 churches.

Sierra Club has approximately 24,000 members in Texas who are dedicated to exploring, enjoying, and protecting Texas's environment and natural resources.

Port Arthur Community Action Network advocates for solutions that reduce or eliminate environmental and public health hazards and improve the quality of life in Port Arthur.