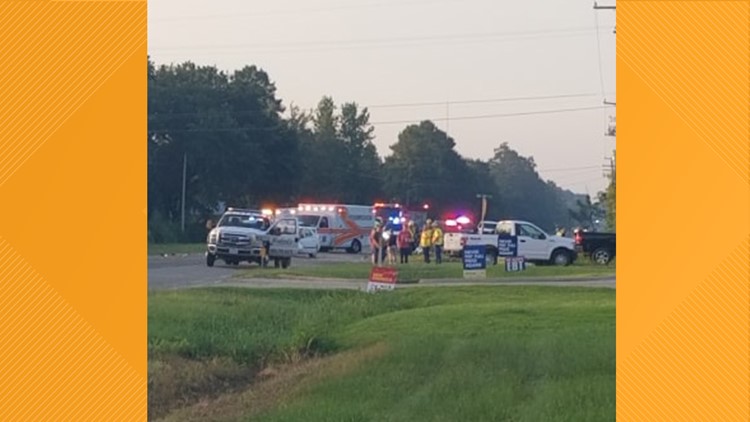 SILSBEE, Texas — A two-vehicle crash at the intersection of FM 92 and Ben D. Smith Road resulted in one man being taken by air to a Beaumont hospital Wednesday morning.

Richard Valentine, 47, of Fred, is in critical condition after his 1994 Geo Tracker was struck by another vehicle and flipped into a ditch.

According to DPS, the wreck occurred around 6:15 a.m. in Hardin County.

Troopers tell 12News that a 2006 Toyota Corolla was heading northbound on FM 92.

DPS says the Corolla failed to yield the right of way and drove into the path of the Geo Tracker which was traveling southbound on FM 92.

Valentine was airlifted to St. Elizabeth Hospital with serious injuries.

The driver of the Corolla, Deborah Holden, 53, of Silsbee, was not hurt but did receive a citation for failing to yield.

On August 14, 2019, at approximately 6:15a.m., the Texas Department of Public Safety (DPS) Troopers responded to a multiple crash at the intersection of FM 92 and Ben D. Smith Road in Hardin County.The preliminary DPS crash investigation indicates that a 2006 Toyota Corolla was traveling northbound on FM 92. A 1994 Geo Tracker was traveling southbound on FM 92.

The driver of the Toyota failed to yield the right of way and turned into the path of the Geo. The vehicles collided causing the Geo Tracker to flip onto its side in the ditch.

The driver of the Geo Tracker, 47-year-old Richard Valentine of Fred, was transported by medical helicopter to St. Elizabeth hospital with serious injuries.The driver of the Toyota, 53-year-old Deborah Holden of Silsbee, was not injured in the crash.Holden was issued a traffic citation for failure to yield the right of way- turning left.There are no additional details to be released.