Officers were called to the Safari Club on Orleans Street around 12:30 a.m. on Sunday, February 17. 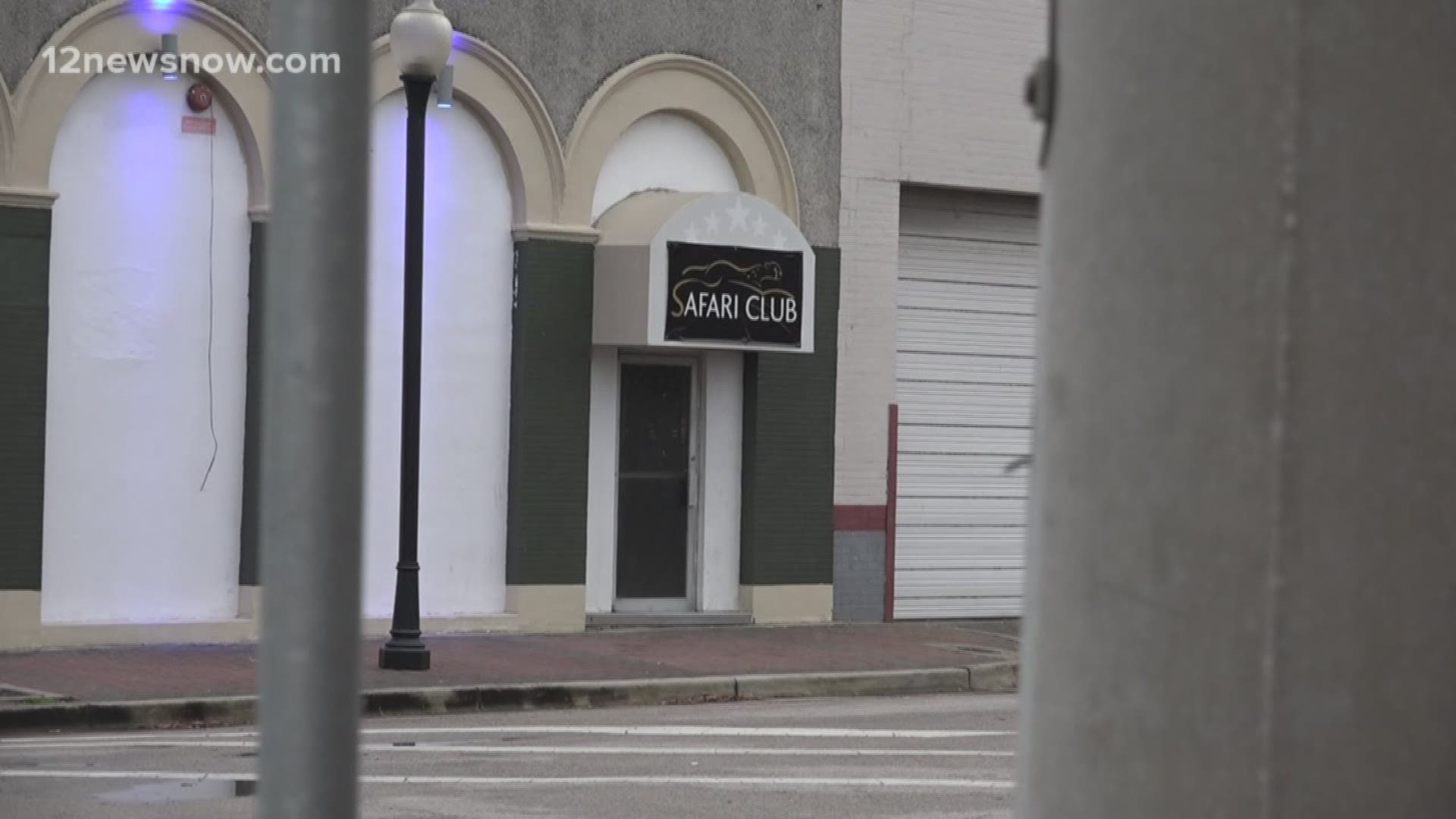 BEAUMONT, Texas — Beaumont Police responded to a shooting at a nightclub in downtown Beaumont on Orleans Street early Sunday morning.

Officers were called to the Safari Club on Orleans Street around 12:30 a.m. on Sunday, February 17. Eyewitnesses told the 12news crew on scene that someone was shot in the stomach. Beaumont Police Officer Carol Riley confirmed that a 24-year-old man from Port Arthur received a gunshot wound to his abdomen, but she said he is not cooperating with the investigation.

Riley told 12News about 300 people were gathered at the Safari Club for a RIP party to remember Gariyon Coleman, the 19-year-old who was shot and killed last summer in an apartment complex on South 8th Street in Beaumont. A fight started inside the club, leading to the shooting, Riley said.

Officers arriving on scene evacuated the club and found the shooting victim outside in the 300 block of Crockett Street. He was transported to St. Elizabeth's Hospital. Riley said the man is expected to recover.

Hospital staff told officers the man who was shot is in stable but critical condition, Riley said in a later statement.

Riley said witnesses are not cooperating with police. She told 12News several suspects may have been involved.

Coleman's aunt, Taecia Jones, spoke to 12News on behalf of the family.

"Whatever occurred at Club Safari had no ties to my nephew or our family," she said. "It's a rough day for us, especially his mother and siblings."

Officers taped off crime scenes in two different parking lots outside the Safari Club and behind the Brent Coon and Associates building near Crockett Street and Orleans Street.

There were three different crime scenes, Riley said, one where officers found the man who was shot as well as two others. Two vehicles were also shot at the same time.

"Witnesses have not cooperated with investigators, and it is unknown if the victim will file charges," Riley said in a statement. "This is a frustrating common occurrence detectives deal with when investigating crimes."

Riley asked that anyone with information about the shooting talk to Beaumont Police or Southeast Texas Crime Stoppers.

If you have information about this crime, you could earn a cash reward of up to $1000 by providing an ANONYMOUS tip to Crime Stoppers of Southeast Texas.

Sunday, February 17, 2019, at approximately 12:28 am, officers responded to 304 Orleans (Safari Club) in reference to a victim of a shooting.  Officers also responded to a call in the 500 block of Orleans in reference to shots fired. Officers learned a disturbance involving gun fire broke out in the club and continued to the surrounding parking lots. There was a large crowd of people and officers quickly cleared the Safari Club. Officers located a 24 year old Port Arthur man in the 300 block of Crockett Street that was suffering from a single gunshot wound to the abdomen area.  He was transported to St. Elizabeth Hospital by Beaumont EMS. Hospital staff told officers he was in stable but critical condition.

Officers located three scenes, one where the victim was located and two others nearby.  Two vehicles were shot during this incident.   Witnesses have not cooperated with investigators and it is unknown if the victim will file charges.  This is a frustrating common occurrence detectives deal with when investigating crimes.

If you have  information about this violent incident contact the Beaumont Police Department at 409-832-1234 or if you wish to remain anonymous, contact Southeast Crime Stoppers at 409-833-TIPS or download the P3 TIPS app and use your cell phone or computer to submit your tip.  All crime stopper tips are anonymous and you could be eligible for a cash reward.