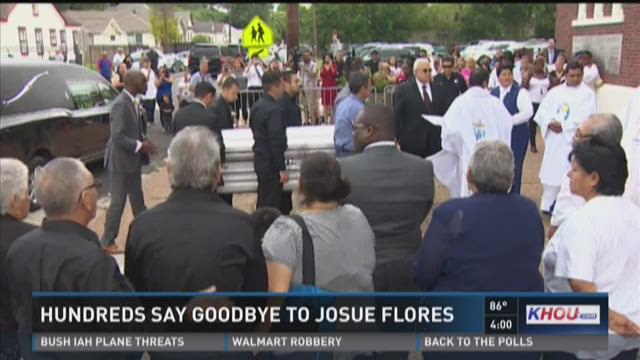 The church was at capacity of 500 and a number of people who showed up could not get inside because it is so packed in there.

Father Anil Thomas blessed the casket of the murdered child on the front steps on the church front of his family and a crowd on on-lookers.

Thomas says he met the boy’s family at the memorial site a day after Josue was murdered and has been praying with them ever since.

Thomas is also trying provide a layer of comfort for the family and others in mourning.

The Davis High Mariachi Pantera band were outside practicing in the morning and played inside for during the emotional Catholic Mass.

The Davis High&nbsp;Mariachi&nbsp;Pantera&nbsp;band were outside practicing in the morning and played inside for during the emotional Catholic Mass.

Cameras were not allowed for the service, but KHOU 11 News was invited inside before the funeral got started. There are no shortage of heavy hearts, so many people trying to find solace in this devastating case with no justice.

Thomas says he hopes people will lean on each other not just today, but through the many difficult days ahead.

“We need to be united in prayer and god can help us to overcome all of our sorrows,” Thomas said.

“It’s like a wound that’s still left open and we pray that will close quickly for the family,” Stella Mireles, attended funeral, added.

Flores’ casket headed to Historic Hollywood Cemetery on North Main following the Mass where the 11-year-old was to be laid to rest.

So many heartbroken people out here, family, friends, classmates and strangers, having to bury this child with few answers as to who could be responsible.

And on this very somber day we're just seeing new surveillance video showing Josue moments before his life tragically came to an end.

The video was given to KHOU 11 News by a neighbor among the many people in this community doing their own detective work looking for anything that could bring police one step closer in catching the person who took this boy's life in such a ruthless way.

In this new video, you can see Josue has his backpack on. He had just left a science club party at Marshall Middle School and was walking home by himself on the sidewalk south on Fulton Street.

Just two blocks away out of site of the camera, Josue was stabbed repeatedly, and the description of the suspect who did it remains very vague.

The Houston Police Department says this footage is now being treated as evidence in the case, but we're told it's just a very small piece of the puzzle.

Detectives won't tell us what other pieces they have so far aside from witness statements.

However, they admit they have many more pieces to put together, and they're hoping those pieces will fall into place with the public's help.

If you have information, there is a $15,000 reward being offered.