The Texas Medical Board is investigating after two patients claimed the doctor used his own sperm to inseminate them instead of the donor they selected. 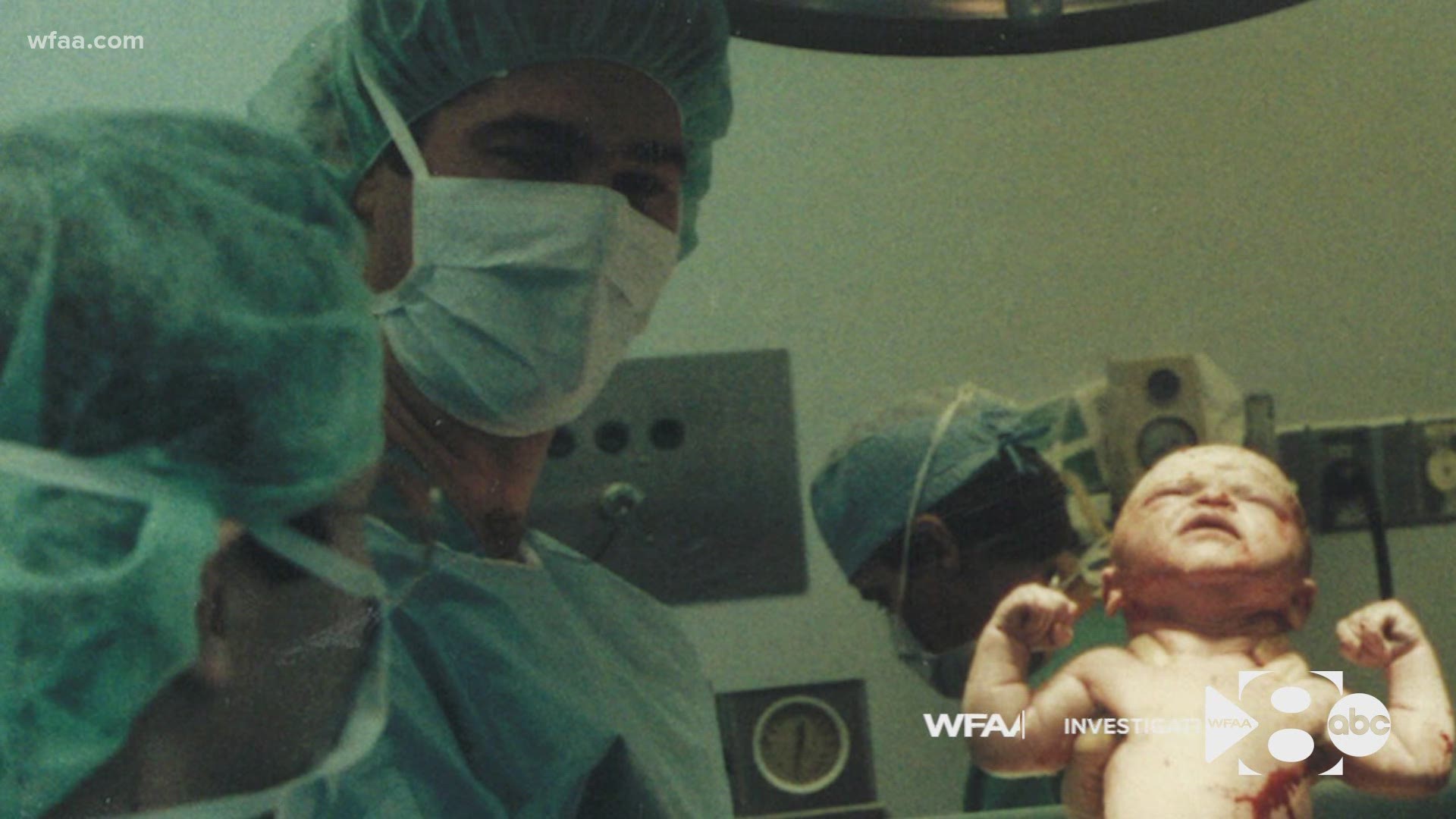 An East Texas fertility doctor is the biological father of seven offspring by patients under his direct care at his fertility clinic in the 1980s, according to DNA records and interviews with the offspring.

Dr. Kim McMorries who still runs an obstetrics, gynecology and infertility clinic in Nacogdoches, is under investigation by the Texas Medical Board for possible “unprofessional and unethical conduct.”

The Medical Board investigation comes after two of his former patients filed complaints alleging the doctor used his own sperm to inseminate them, instead of using the donor sperm the patients had selected.

RELATED: Medical board will re-open investigation into fertility doctor

WFAA has learned of an eighth child fathered by McMorries through sperm he donated while in medical school in the 1970s, according to interviews and emails. But it’s unclear if McMorries had any role in the care or treatment of the offspring’s mother.

Most of the eight offspring – four boys and four girls – have asked to remain anonymous. But two of the half-sisters – both born in 1987 and only recently discovering that Dr. McMorries was their father – agreed to speak with WFAA.

Jessica Stavena, 33, of Houston, said she’s speaking out after learning the truth through a commercially available DNA kit.

“I didn't really know what to think or what to say,” Stavena told WFAA.

Stavena connected with her half-sister Eve Wiley, 33, of Dallas, who discovered in 2018 through a genetic test that her father was not the out-of-state donor her mother had initially selected. Since then, with the help of at-home DNA kits, Wiley and Stavena have connected with the other offspring.

“These women, they trusted (McMorries),” Wiley told WFAA. “They trusted him to do exactly what they asked,” she said.

Stavena's mother’s medical records show McMorries, 68, used “fresh” sperm, which experts say generally only survives an hour or two outside of the body.

Stavena said this means he may have "produced the sample and then went straight into the treatment room with his sample.”

McMorries and his attorney declined WFAA’s multiple requests for an interview.

In prior emails with Wiley, McMorries claimed his sperm was used to father only one or two other offspring with patients through artificial insemination at his clinic from 1983 to 1986. He also said he was aware of an offspring fathered with sperm he donated during his medical school days in the 1970s.

“When this occurred, it was not considered wrong,” McMorries wrote Wiley in a 2019 email. “No one ever considered the effect of genetic testing 32 years later," he wrote.

After being confronted by Wiley about the allegations, McMorries alleged that Wiley’s mother, Margo Williams consented to local “anonymous” donors, after repeated failures to conceive with frozen sperm from out-of-state donors. McMorries claimed to “mix” his sperm with the “primary” donor’s sperm identified as #106, in a process he called an “enhanced insemination.”

“Upon reviewing my progress note that you kindly forwarded-- it does show an enhanced insemination on Nov. 9, 1986 with the original donor #106 and local donor #12,” McMorries wrote in a March 2019 email.  In the other records, McMorries acknowledged that donor #12 is himself.

“I thought she (Margo Williams) understood this,” McMorries added.

Williams, however, told the Texas Medical Board that she never consented to a local donor, including the sperm from her treating physician.

“(McMorries) was our doctor, not our donor,” Margo Williams told the Medical Board in September. “We would never have agreed to him being the biological father of our child.”

“Because we live in a small town and concerned about biodiversity and accidental incest among offspring, we chose two donors through California Cryobank and refused a local donor,” Williams added.

Stavena’s mother, Pauline Chambless, said she agreed to a local donor, but never consented for Dr. McMorries to be the donor.

“Just for the record, I never and would have never agreed to being inseminated with my doctor's sperm,” Chambless said in a written statement to the Medical Board. “The sperm donor was to be anonymous, meaning the donor would be someone I did not know.”

“I clearly remember him telling me that we could obtain fresh donor sperm from an intern-medical resident that worked at the Nacogdoches Medical Center hospital located next door to his clinic,” Chambless said in the statement.

“What he did was very unethical, deceptive, selfish, and inconsiderate, that he could make a decision for me and my child that would cause a lifetime of emotional trauma and pain,” she added.

Stavena and Wiley told WFAA that it's been an emotional rollercoaster. Yet through it all, they say, the most shocking thing is that McMorries is still practicing medicine.

“He is still seeing patients. He is still delivering babies,” Wiley said.

Case goes to the Texas Medical Board

McMorries’ actions were not illegal in the 1980s. That’s why former patients and their children say the only way the doctor can be held accountable is through penalties imposed by the Texas Medical Board, which has the authority to revoke McMorries’ state medical license.

The Texas Medical Board initially declined to take the McMorries case last year, saying his actions did not "fall below the acceptable standard of care." But days later, after WFAA aired its story about the board’s decision not to pursue an investigation, the state agency voted to re-open the investigation. The Texas Medical Board is currently reviewing the case for possible “unprofessional and unethical conduct.”

In September, Wiley's mother, Margo Williams, and Stavena virtually testified against McMorries before the Board.

When contacted, the Medical Board told WFAA it can't comment “as this information is statutorily confidential.”

To stop the board from penalizing him and potentially revoking his license, McMorries has filed suit for a temporary injunction, claiming the statute of limitation has passed.

“…The Texas Legislature has said that, after seven years, so much time has passed that it is too difficult to know the truth with enough certainty ... to act against a physician's license,” the suit alleged. “… The board should be following that law, but it is not."

The suit also alleged “…the Board has become just another participant in the media maelstrom. Another voice, with its own agenda. The Board has abdicated its duty to follow the law and is bowing to media and other pressure for the Board’s own ends, ….”

Additionally, the suit claimed McMorries has been “at a disadvantage.”

“While former patients can go to the media and discuss as much or as little of their case as they want, the physician is still bound by confidentiality rules[,]” the suit said.

To address this concern, WFAA obtained medical releases from Wiley and Williams and provided them to McMorries and his attorney. Yet so far, McMorries has not taken the offer to speak.

While the McMorries case remains held up by legal proceedings, the fertility industry continues to grow.

In 2018, the fertility industry reportedly generated more than $13 billion. It’s expected to reach $27 billion by 2026. Meanwhile, experts say laws in the U.S. have not kept pace.

“The industry in the United States is so unregulated,” Dr. Jody Madeira told WFAA.

Madeira is a nationally recognized legal expert on reproductive rights. The Indiana University law professor filed the initial complaint against McMorries with the Texas Medical Board calling his actions "grossly unethical."

Madeira, who also recently testified at a Texas Medical Board hearing, told WFAA that the Board was not bound by any seven-year statute of limitations, as McMorries and his attorney are claiming.

Madeira said McMorries’ conduct “violates sacred tenets of informed consent when he used his own semen on un-consenting patients.”

“It’s a goliath that's entirely unregulated,” Madeira said. “There's no agency (in the U.S.) like they have in, for example, the United Kingdom – the Human Fertilisation and Embryology Authority - which determines which procedures will be used, assesses which doctors can carry them out (and) maintains ethical, legal and regulatory controls over the business.”

Only four states have laws against it - laws that say doctors who use their own sperm to inseminate their unsuspecting patients constitutes sexual assault.

Texas is one of them. With Wiley serving as a catalyst, Texas passed legislation last year criminalizing the practice.

Wiley and Stavena want to see the rest of the country follow suit. So far, Florida, Indiana and Colorado have followed suit, thanks in part to the women’s advocacy for legislation.

“It blows my mind that this is considered to be the Wild Wild West. (We) need to have things in place to hold these doctors accountable so they don't do this,” Wiley said. “People need to be protected and they need to know that they are not protected.”