The best part? It's not just for students at Hardin-Jefferson, it's for all kids, 18 and under, within the community, and it's free. 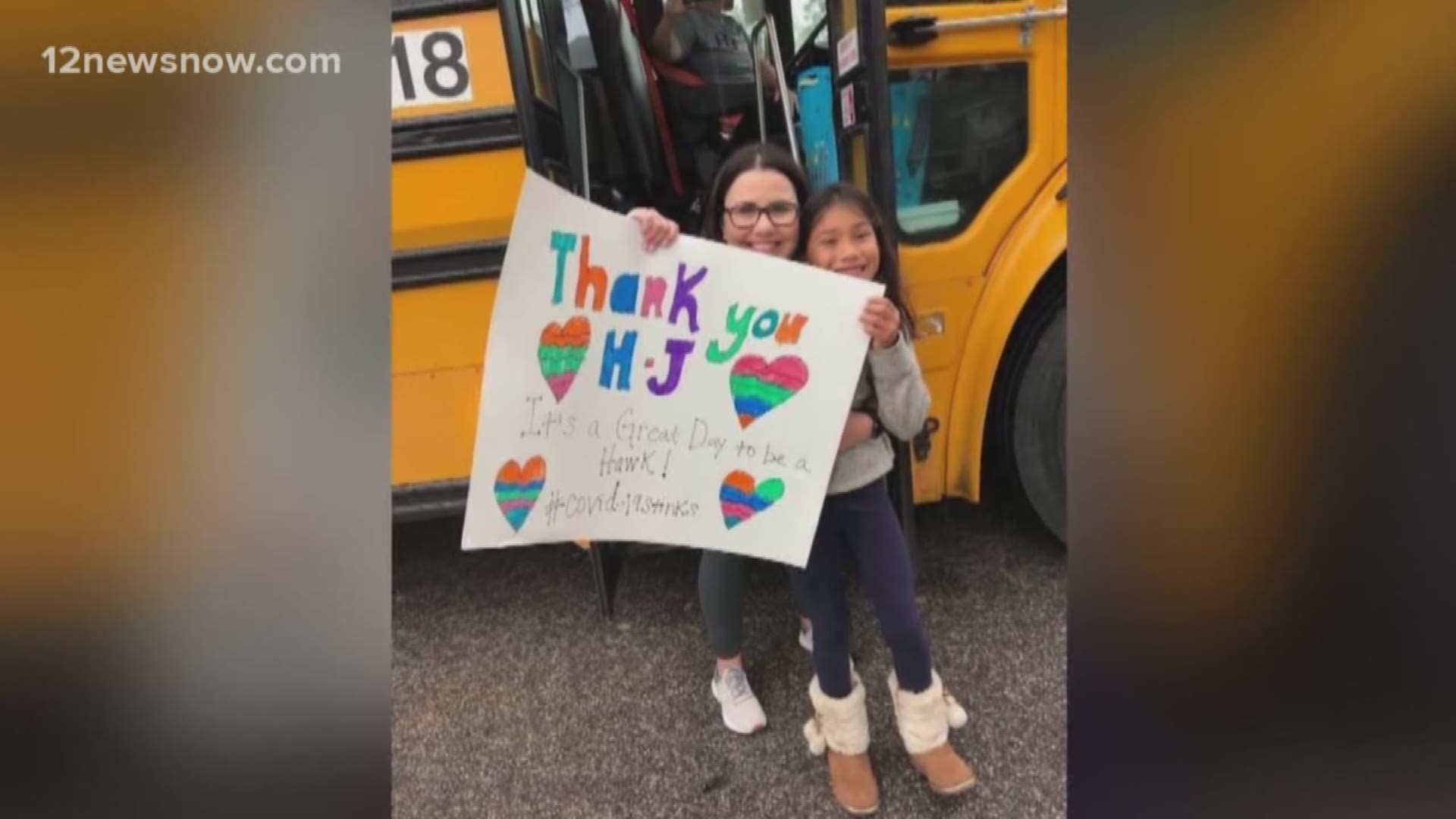 HARDIN COUNTY, Texas — Despite schools across the state closing, several here in Southeast Texas are still making sure their students get a free breakfast and lunch.

Hardin-Jefferson ISD gave out about 350 breakfast, and more than 750 lunches on the first day of their meal delivery service.

"We didn't know how big this was going to be," Mandy Fortenberry said.

Fortenberry, with Hardin-Jefferson ISD, says all the credit for the district's new meal delivery program goes to Courtney Boullion and her child nutrition staff.

"Within hours of us being told that we could not open the doors of our school her and her staff were just trying to hammer out a way that we can still feed our kids," Fortenberry said.

Boullion says they prepared for the bus deliveries on Tuesday with their curbside pick-up, but they had no idea what to expect Thursday. The bus drivers and one or two members of the nutrition staff ride throughout the different areas with three breakfast options, hot and cold lunch entrees, along with plenty of milk and fruit.

"We have 11 routes in the morning, and they hit all of the different communities, and they deliver to all the children who are present," Boullion said.

The breakfast deliveries run from 8-9:30 a.m., followed by the lunch deliveries from 11-1:30 p.m Monday through Friday.

The best part? It's not just for students at Hardin-Jefferson, it's for all kids, 18 and under, within the community, and it's free.

"We want people to know that this is for everybody it isn't just for people that are under a financial burden," Fortenberry said

Fortenberry wanted to clarify any confusion that the service may only be for the district's bus riders.

"This is for everybody, we want our kids, and are our parents to get their kids to the nearest bus stop, it's not in their driveway, because some of our buses can't travel down some of the more rural roads, get to your nearest bus stop and wave us down and will see you," Fortenberry said.

“Everybody seems to be really on board with helping and the whole thing, I mean no matter how stressful getting the beginning set up you know going it's been really good to see all the positive, " Boullion said.
Fortenberry says they're taking extra precautions to keep the kids and the community safe.

“We all got our temperatures taken before we got on the bus, we have special hand sanitizers on the bus, and we all sanitize between every stop and every time we touch something," Fortenberry said.

Schools across Southeast Texas have started using similar methods or doing morning and afternoon pick-ups on campus. Fortenberry says it's been a great way to give students some normalcy.

“It's really a way that they can feel normal again by seeing not only the school bus in their yard but for a lot of them as their normal bus driver, and our kids love their bus drivers,” Fortenberry said.

Boullion says she hopes to keep it going until classes resume.

"I have secured a ton of paper goods and as much food as I possibly could that was you know shelf stable, and I am working on trying to get as much as possible in the future, too," Boullion said.

Everyone in the Hardin-Jefferson community is encouraged to keep an eye on their website for updates.

"I think the longer we are out of school, the more families are going to continue to maybe struggle a little bit with just those two meals a day, and  we want people to know that this is for everybody," Fortenberry said, "We want all kids from all walks of life to just meet at the curb and You know even if it's just for a simple good morning and a blueberry muffin."

RELATED: Teachers, parents are helping students learn at home while school is out due to coronavirus 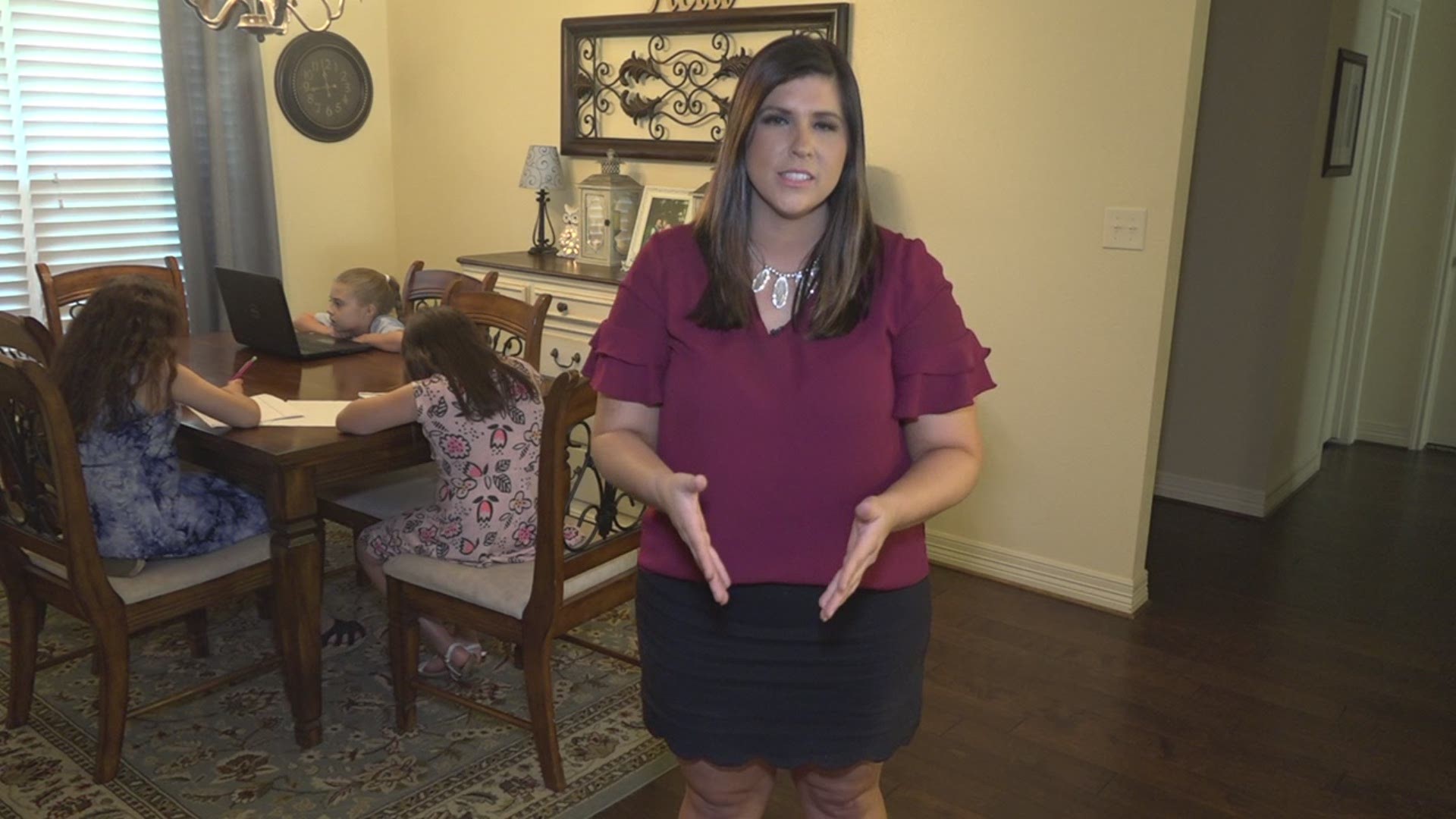