At around 3:30 in the morning, Travis Yust was faced with a tough decision, to pull the trigger or let the men he believed to be responsible for breaking into his home get away. 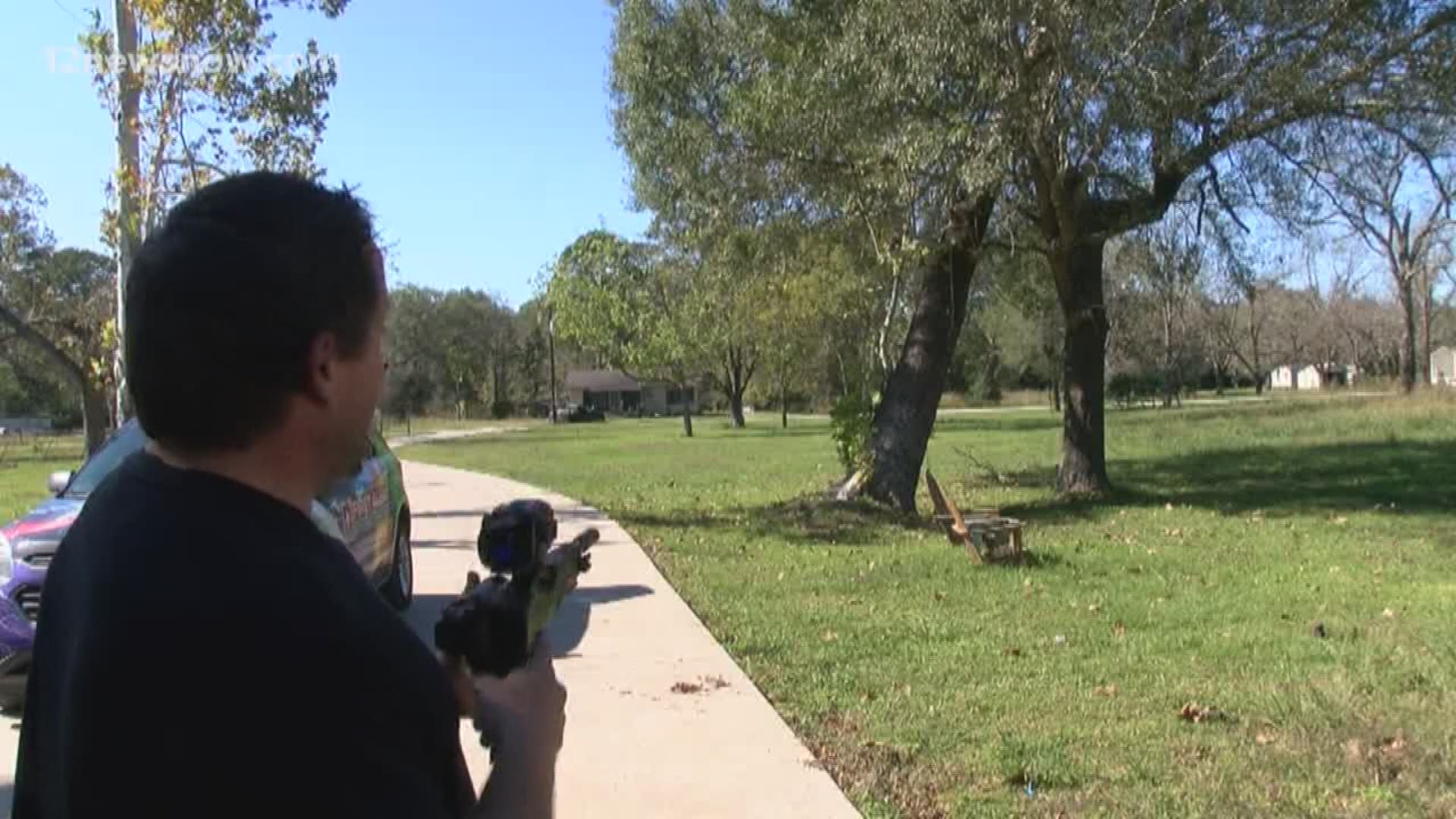 BATSON — Travis Yust has lived in Batson all his life, but on November 8th he was forced to realize it's no longer the safe town where he grew up.

In a matter of minutes, Yust went from sleeping peacefully in his home, to protecting it. At around 3:30 in the morning, Yust was faced with a tough decision, to pull the trigger or let the men he believed to be responsible for breaking into his home get away.

"My wife woke me up and said the dogs are barking and our door beeped," explained Yust.

Yust said they have a home alarm, but it wasn't activated that night. The door, however, beeps every time it's opened. He said he assumed the wind blew open the door.

"I turned on the light and noticed that my gun safe door was wide open, and right then I panicked," said Yust, "I said, I've been robbed."

Yust ran outside and grabbed his thermal imaging scope. He managed to spot the alleged thieves hiding across the street on the property of one of his relatives.

"I immediately went and grabbed my rifle, mounted my scope onto the rifle, grabbed a pistol, and headed off down the driveway," said Yust.

Yust fired a couple of warning shots in the direction of the men. One of them was able to get away, but the other wasn't so lucky.

"He said, 'Please sir, I'll just leave,' and I said, 'You're not going anywhere, get on the ground,' and shot his tires out, because I wasn't going to let him escape," said Yust.

With the help of fellow Batson Firefighters, Yust was able to detain the man. Chase Breaux, until Deputies arrived. Yust said the took his statement and interrogated Breaux. Breaux was arrested for possession of methamphetamine. The burglary, however, is still under investigation.

Stephen Watson has worked with handgun training and safety for more than a decade. He said Texas law allows property owners the right to defend themselves.

"It's very important that if you own a firearm and you're considering using that firearm for self-defense of yourself or to use it in the defense of your property, you better study the law," said Watson.

Watson explained that the law is very complex, and can create tremendous liabilities for you both civilly and criminally if you do the wrong thing. He said the law for using deadly force in defense of property can hinge on who is committing the crime and even the time of day.

Watson warns, however, that if criminals are considering robbing a hard working Texan, they should probably rethink that decision.

"It's very possible in this state that you will get shot," said Watson.

Yust said he later realized what a potentially deadly situation he was in. He could have chosen to shoot the men, or they could have opened fire on him. What it came down to was choice, and Yust said what's important is that he had the choice.

Yust also walked away with a lesson learned.

He hopes his story will send the message that Hardin County won't stand for thieves coming into their homes while they're sleeping, whether it be a little thing or a big thing.

Hardin County Chief Deputy Kenny Davenport said Yust did what he felt necessary to prevent the man from leaving, but the sheriff's department doesn't advise others do the same. Davenport said had Yust accidentally struck somewhere else and hit one of them, they would have different issues to look into very carefully.