All eyes are on Texas after Abbott recently banned any entity in the state, including private businesses, from mandating vaccines for workers or customers. 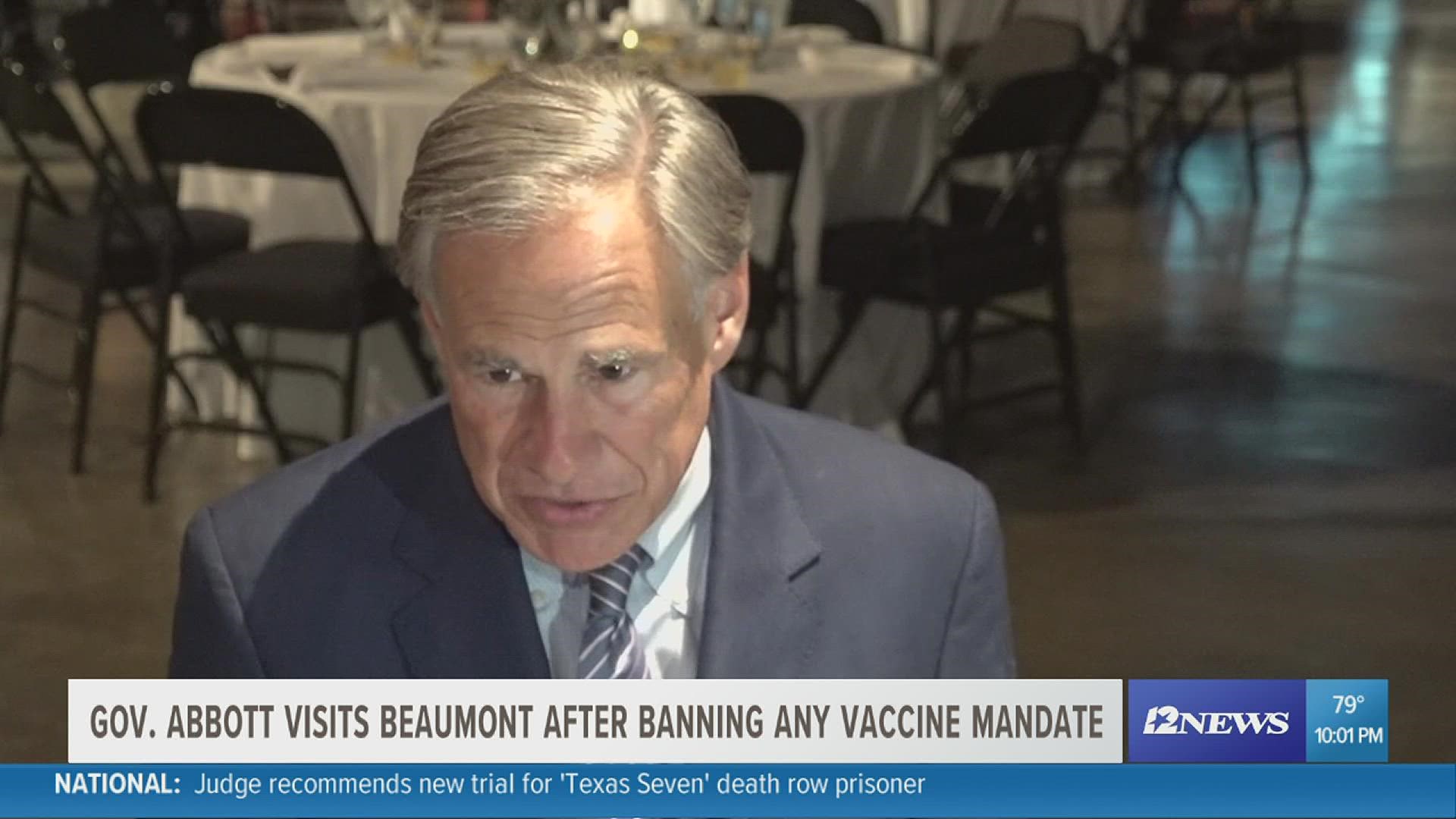 All eyes are on Texas after Abbott recently banned any entity in the state, including private businesses, from mandating vaccines for workers or customers.

In the order, Abbott, who is vaccinated, said vaccines have always been strongly encouraged, but that the Biden administration is "bullying" private entities into imposing mandates.

The visit to Beaumont has been on the governor's schedule for some time. Abbott is scheduled to speak at the Beaumont Civic Center Arena Tuesday, Oct. 12, 2021, at 7:30 p.m. It's currently unclear if he will be taking questions about his vaccine ban, or if he'll mention it during his speech.

Abbott's new executive order essentially puts restrictions on businesses that put vaccine mandates in place, which is a direct challenge to the Biden administration's vaccine mandate.

Some business owners in Southeast Texas said employees should have the final say on their vaccine status. Others said the government should simply "butt out" of private business practices.

A new executive order by Abbott to ban COVID-19 vaccine mandates from any entity in Texas has brought with it some controversy.

"It's federal versus state,” said political analyst Tom Taschinger. “It's business versus government. I might also add, it's not clear that President Biden's requirement that companies issue vaccine mandates is legal, either."

“I think it will probably be a private business bringing sued, rather than the federal government suing the state of Texas, either which certainly likely to happen," Kelley said.

Kelley said the government telling businesses what to do is something Texas has never seen before, and there seem to be mixed emotions among the community about it.

"If the unvaccinated want to go around and do whatever it is that they want to do, that is their right,” Watts said. “But as a business owner and a person who is vaccinated and is concerned about public safety, I don't feel that should be taken away from us."

“So, if Abbott keeps doing things like this, he'll probably get the Republican nomination for governor, and frankly, that's uppermost in his mind right now,” Taschinger said.

Politics aside, will this move sit well with Texans? Kelley said Texans love their freedom, and the governor's move may have business owners asking, "Why does the government have to get involved?"

Abbott's executive order is not state law, but he is asking lawmakers to pass it on during the third special session.

12News asked Abbott at Tuesday’s meeting in Beaumont if the latest vaccination ban was an election move. The governor responded saying it's about

Abbott told 12News at the Tuesday meeting that the ban on mandates is to ensure Texans have the ability to make their own decision.

“This is a move to help restore freedom to individuals to make their own choice about whether they want the vaccine. I’ve talked to countless Texans and every region in the state who were literally crying because they were faced with two difficult choices: Were they going to be able to continue to earn a livelihood or were they going to not be able to have money to pay their bills because they were force to take a shot. I thought they should be able to make that decision. I want to make clear in Texas that no one can be required to take a vaccine."