Family calling for justice for Josue 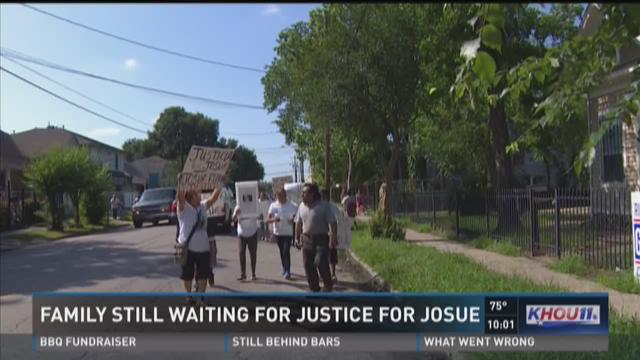 HOUSTON – It’s been an emotional roller coaster for the family of an 11-year-old boy killed Tuesday while walking home from school.

Investigators still only have a very vague description to go on, a black man seen running from the scene. Now, the Latino community is rallying around the family of Josue Flores. Even though there's no evidence of a hate crime, there's a lot of tension on these streets.

"We want the criminal, the murderer that stabbed little Josue to death," said Juan Cortez, marching down the street.

Full of passion and pounding the streets, Near Northside residents are now worried about their own safety.

"Who is it, is he among us? We are going to feel like we can't be out," said resident Angelica Banegan.

Police say the man who murdered Flores is still out there.

"There is an 11-year-old that's dead and nobody is doing anything about it," shouted a woman in the crowd.

At the sidewalk where Flores was killed, there was a moment of silence.

However, it's the waiting fueling frustration and calls to clean up the streets.

"These problems didn't come until the rail train came and they started kicking all the homeless from the park and downtown," said Cortez.

"Not all homeless people are the same, but they are some always walking around all drugged," said resident Santos Cisneros.

Police have little to go on—no suspect, no motive, just an unprovoked attack.

"It could be anybody's children," shouted a man in the crowd.

It's that fear they hope will bring change.

"We just have to come together and anything we see suspicious we should call," said Banegan.

The Salvation Army does have a facility nearby. Leaders there say they're aware of the anger in the community and will continue to work to be a good neighbor.

If you have any information about the murder of Josue Flores, please call Crime Stoppers at 713-222-TIPS. There’s a $15,000 reward being offered for information leading to an arrest.

Meantime, the community is raising support for the Flores family. For more information, click here.