ExxonMobil officials are urging union members to join the “94% of private employees who choose to work without the costs and risks of a Union.” 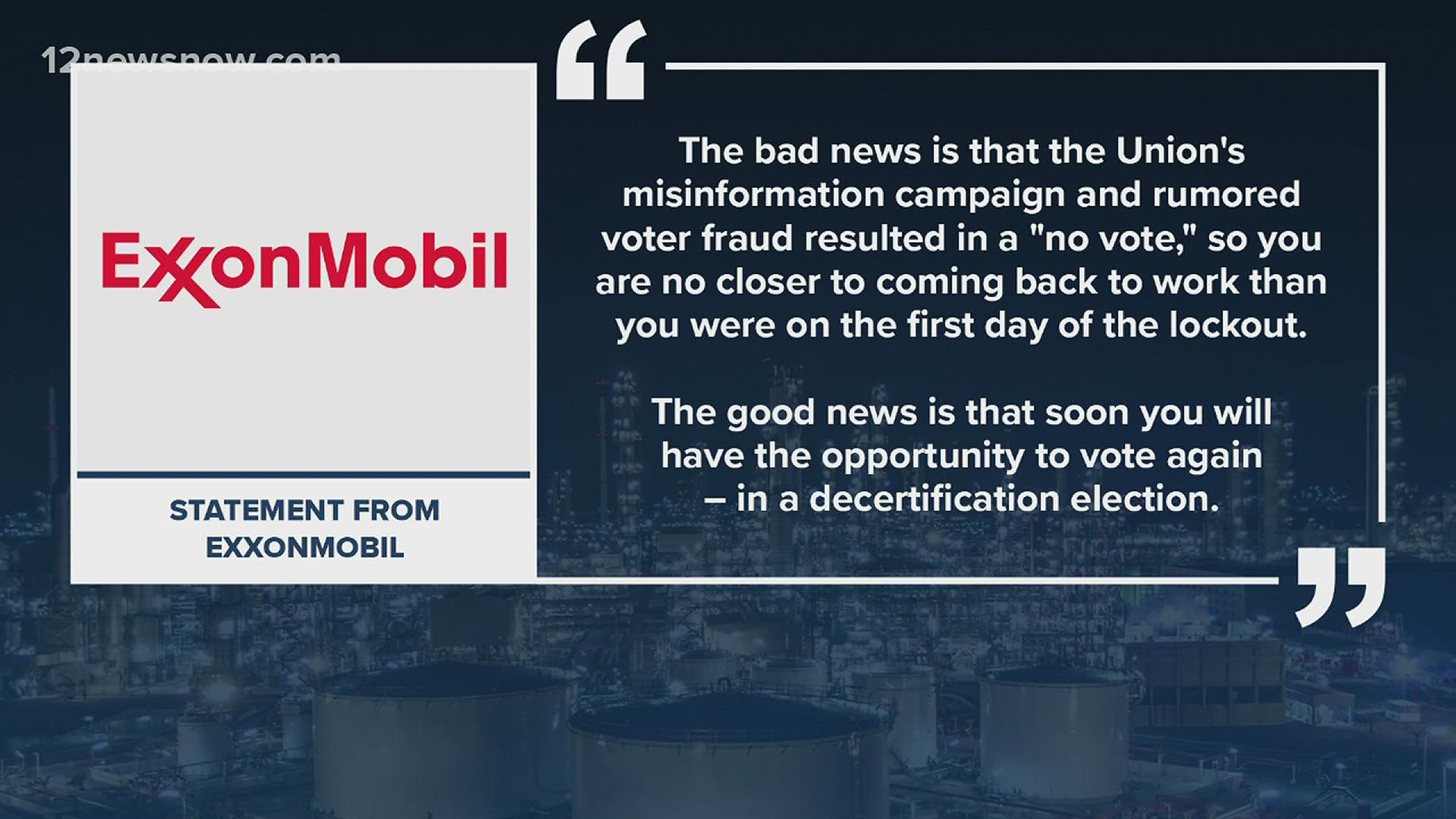 BEAUMONT, Texas — ExxonMobil officials are encouraging locked-out United Steelworkers members to decertify the union at an upcoming vote so they can, “put an end to Union irresponsibility, pressure and unnecessary risks."

Company officials said the USW has refused to allow employees the chance to vote on the company’s offers since January despite many requests.

According to the release, USW officials have refused a ratification vote despite most union members paying $125 per month in union fees and that the five-month lockout has cost the employees $50,000.

Exxon officials said it took an employee-led petition to decertify the union to get the USW to agree to vote, and even after union officials agreed, they continued their voter suppression and intimidation tactics.

Related: ExxonMobil: Employees will not lose jobs if they vote out United Steelworkers union

The energy giant said instead of protecting the anonymity of voters, the union tried to intimidate Exxon employees by pursuing a “split room vote,” according to the release. The majority of voters refused this, and the USW had to conduct a secret ballot vote.

At the Tuesday vote, locked out employees voted to reject Exxon’s latest proposal. Company officials said USW members are no closer to coming back to work than they were when the lockout started in May due to alleged misinformation spread by the union.

ExxonMobil officials are urging union members to join the “94% of private employees who choose to work without the costs and risks of a Union.”

On October 6, an individual claimed they had enough signatures to request a vote to decertify the United Steelworkers union.

The union was notified about the decertification vote request from the National Labor Relations Board, according to United Steelworkers Local 13-243 representative Bryan Gross.

Union members can request an election to vote out or "decertify" their union or replace it with another union according to the NLRB's website.

At least 30% of the union members must sign a card or petition requesting the decertification election be held by the NLRB.

As you were informed in our October 14 Decertification Update, the Company is working with the National Labor Relations Board (NLRB) to schedule an election to determine if employees at the Beaumont Refinery and Blending & Packaging Plant will continue to be represented by the USW. We expect that the election will be conducted through a mail-in ballot. To conduct this vote, the NLRB will mail a package (including a secret ballot) to each bargaining unit employee’s home address.

If your address has changed and you have not already informed the Company, please notify the Beaumont Area HR Department by sending an email to Beaumont.Area.HR@exxonmobil.com by Monday, October 25 at 5:00 PM. This email should include your name, prior address, and new address.

From an ExxonMobil release:

Over the last nine months, the USW has refused to allow you the opportunity to vote on the Company’s offers. Despite the fact that most of you have paid about $125 per month in union dues and more than $7,000 over the term of the prior agreement, the USW would not allow a ratification vote as many of you requested.

Neither a seventy-five day lockout notice nor a five month lockout, which cost each of you about $50,000, moved the USW to bring any of the Company’s offers to a vote. It was only after an employee-led decertification petition threatened the existence of the Union that the USW agreed to a vote.

Even after announcing a vote, the USW continued its voter suppression and intimidation tactics. While most Unions protect the anonymity of voters through a secret ballot, this Union attempted to intimidate people by pursuing a “split room vote.” However, the majority refused to accept the Union’s games. Given your clear support for a secret ballot vote, the USW had no choice but to accept your demands.

The bad news is that the Union’s misinformation campaign and rumored voter fraud resulted in a “no vote,” so you are no closer to coming back to work than you were on the first day of the lockout.

The good news is that soon you will have the opportunity to vote again – in a decertification election. This time, your vote will determine whether you want to put an end to Union irresponsibility, pressure on your loved ones, and unnecessary risks, such as strikes and lockouts.

Join the 94% of private employees who choose to work without the costs and risks of a Union.

Vote No for No Union!