The company said the station would provide 27 permanent jobs near Bridge City. 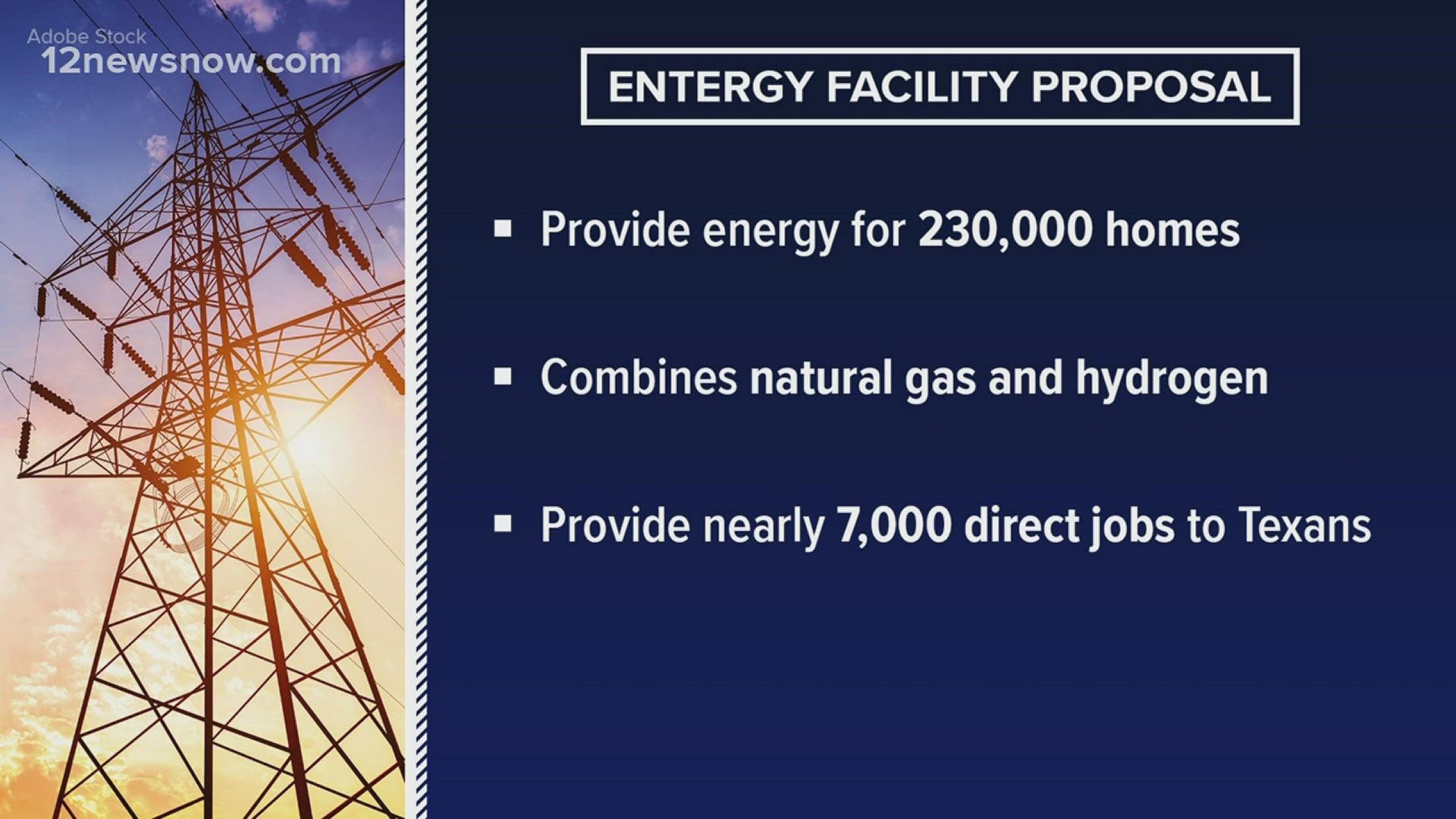 BRIDGE CITY, Texas — Entergy is looking to build a new Southeast Texas power station that would power more than 230,000 homes and bring more than two dozen jobs to the area.

The station would be built near Bridge City and would help the company reduce its "reliance on energy markets" and generate power with natural gas and hydrogen, according to an Entergy Texas news release.

For Entergy, years of service in Southeast Texas now means time for an update.

"Some of our infrastructure ages. It's been around for 50-60 years. We need to stay ahead of that load growth," said Stuart Barrett, vice president of customer service at Entergy.

On Thursday, the company released intentions for its next big project, which is a dual-fuel power facility that would use natural gas and non-carbon omitting hydrogen.

"This is an option that were really excited about for this facility. It can utilize hydrogen, which is a better source and lower emission, or no emission source of fuel."

If the Orange County Advanced Power Station is approved for construction, it would mean 27 permanent jobs for the area, according to Entergy spokesperson Allie Payne. It would also mean an estimated $1.8 billion in economic activity for the regional economy.

Residents of Lauren Drive who neighbor the facility agree that it is an eye sore, but they haven't experienced major problems living close by.

"As long as they stay in their little neighborhood, I’m really not worried about it,” said neighbor Robert Hufstetler. “As long as they’re not in my backyard, but I think all that’s pipeline area, too. So, they'll probably be in the same general vicinity of where there at, so I don’t think it will be an issue.”

The station is intended to help supply power to customers in Southeast Texas and help Entergy "focus on long-term sustainability" while making moves to decrease carbon emissions.

Entergy Texas 'intends to file a request for approval' with the Public Utility Commission of Texas in the coming months. If the construction is approved, it would start in the second quarter of 2023. It's expected to be up and running by summer 2026.

From an Entergy Texas news release:

BEAUMONT, Texas – As part of its plan to meet growing demand across Southeast Texas and modernize its generation fleet, Entergy Texas, Inc. has begun the process to seek approval to construct the Orange County Advanced Power Station, a 1,215-megawatt, dual fuel combined cycle power facility. The plant will be located near Bridge City, Texas and will be capable of powering more than 230,000 homes and use a combination of natural gas and hydrogen. Hydrogen produces zero carbon emissions as a fuel source for electric generation.

“The Orange County Advanced Power Station is a Texas project for Texas customers,” said Sallie Rainer, president and CEO of Entergy Texas. “The addition of this facility will continue our work to provide reliable, low-cost and clean energy in Southeast Texas and will provide more than $1.5 billion in net benefits to customers by reducing reliance on energy markets.”

An outside economic impact analysis by TXP, Inc. found that the construction and operation of the Orange County Advanced Power Station will play a major role in creating jobs and driving increased economic activity. Estimates indicate that construction will provide more than 7,000 direct jobs in Texas and nearly $1.8 billion in economic activity for the regional economy. Once operational, the plant will provide approximately 27 permanent direct jobs in Texas.

In addition to meeting current customer needs across Southeast Texas, the Orange County Advanced Power Station will be built with a focus on long-term sustainability in an economy where many stakeholders and customers are focused increasingly on decarbonization. The plant’s ability to be powered by hydrogen, which emits no carbon dioxide, supports its long-term viability for customers and the Southeast Texas community. Hydrogen is widely used today in industrial processes, including by a number of Entergy Texas’s large industrial customers. The fuel can be stored nearby in facilities such as in Entergy Texas’s Spindletop storage facility and can be deployed alongside natural gas to produce lower emissions energy reliably when needed, including working in hours when intermittent renewable resources do not generate power.

“Southeast Texas is well-positioned to play a key role in the transition to increased use of hydrogen in electric generation,” said Rainer. “Our region is home to hydrogen producers, pipelines, storage and industrial users. We look forward to working with industry partners on the role the Orange County Advanced Power Station will play in providing reliable power while also meeting the sustainability needs of our customers and communities, and also to establish Southeast Texas as a global hub for hydrogen production and consumption.”