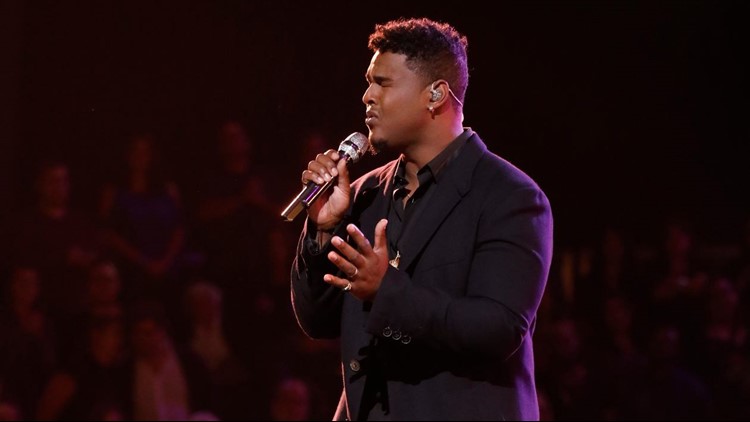 Photo by: NBC
Port Arthur's Deandre Nico performs on The Voice on NBC.

PORT ARTHUR — Port Arthur singer DeAndre Nico will be leading the Christmas parade in his hometown this weekend.

Nico will be grand marshal of the Port Arthur Christmas Parade on Saturday night in downtown Port Arthur according to the City of Port Arthur.

Bands from Memorial High School, Thomas Jefferson Middle School, Abraham Lincoln Middle School and Tekoa Academy will be marching in the parade as well as the DeQueen Boys Stomp Team and others according to the city's website.

At 8 p.m. a mass choir will be performing at the Port Arthur Pavilion according to the website.

Just Wednesday night Nico lost his bid to move forward on NBC's The Voice after viewers voted via Twitter to give the "instant save" to his Team Adam teammate Reagan Strange.

Strange who was sick and did not sing in the "instant save" along with Nico and Team Blake's Dave Fenley were all in the bottom three Tuesday night.

All four coaches gave Nico a standing ovation and Jennifer Hudson was in tears after his performance.

Nico told 12News in an interview Tuesday afternoon that he'd had laryngitis this week.

After Nico performed his coach, Adam Levine, said that he was sad to say he was asking viewers to vote for Strange because she had not been able to "sing for her life."

Twitter exploded with lots of fan complaints that Levine had wronged Nico by urging viewers to vote for Strange even though she didn't sing.