25 cars in total came off the tracks 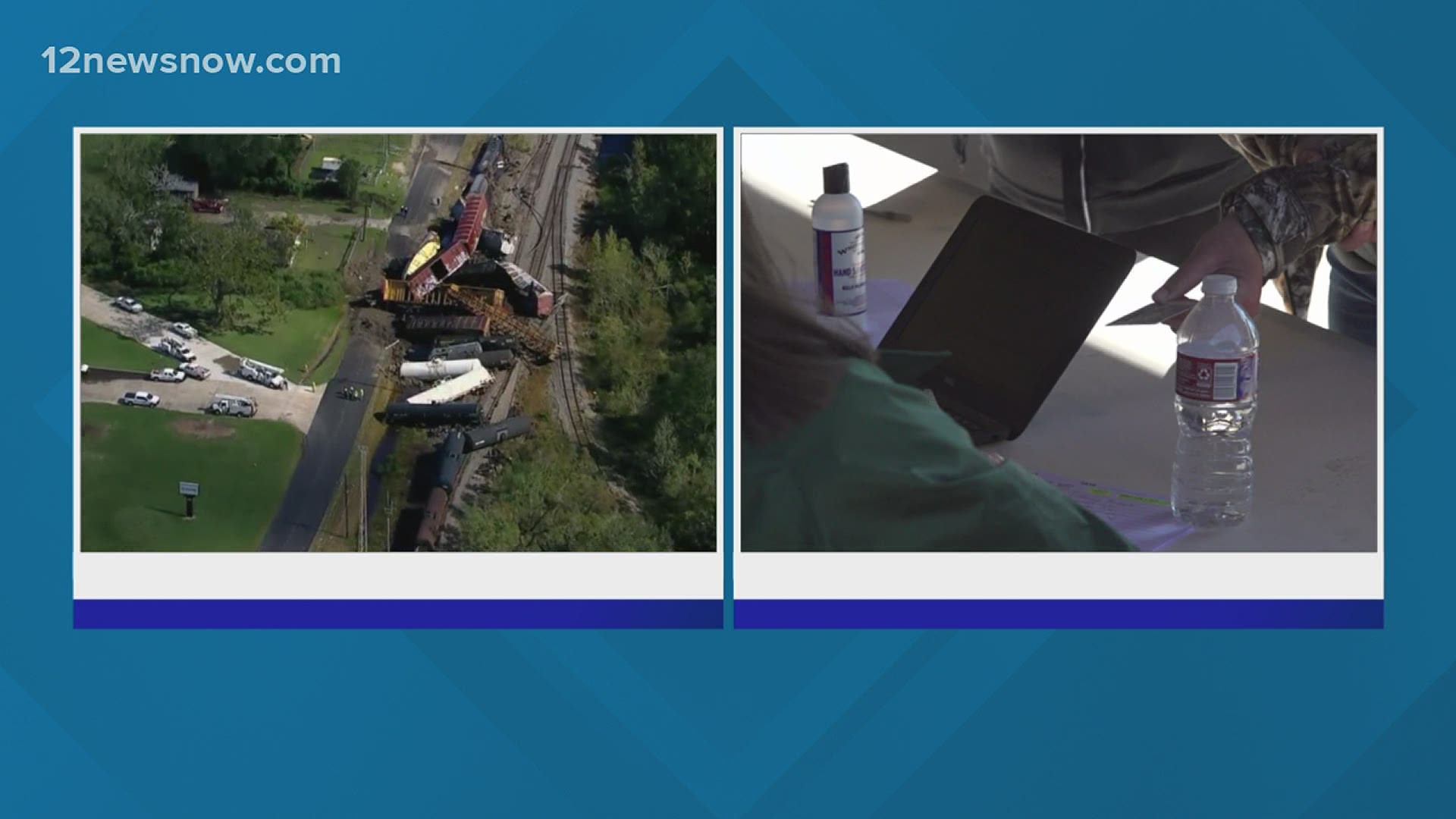 MAURICEVILLE, Texas — Nearly two months after a train came off the tracks in Mauriceville, a Southeast Texas law firm is filing a class action lawsuit.

At the time of the derailment, 25 cars came off the tracks. Several were loaded with dangerous chemicals.

Folks in the area were evacuated. Businesses and schools closed.

According to the Coon law firm, the incident cost the local economy several million dollars.

In a statement, the firm said in part, "This is primarily a hard-working blue collar area and a few thousand dollars in losses to area residents and business owners is a very serious amount in each of their pocketbooks."

From a Brent Coon and Associates Law Firm statement:

On the morning of October 29, 2020, a Kansas City Southern Railway Company (KCS) train derailed in Mauriceville, Texas. The derailed cars included 15 loaded with potentially highly toxic and flammable materials.  As a result, a large area totaling several square miles around the derailed train was evacuated.  Power outages were widespread, impacting thousands of area residents.  Several evacuation protocols remained in place for a number of days and caused a significant amount of economic loss to the community.  Businesses were forced to close.  Schools were forced to close.  Parents were stranded from work with no one to care for many of the displaced students.  Residents of the area were forced to leave and find accommodations elsewhere, many at hotels already packed with contractors and evacuees from the hurricanes that had already devastated the area in the preceding months.

The derailment caused several million dollars of economic loss to the area.  As the vast majority of those impacted had losses measured in the hundreds or few thousands of dollars each, the costs associated with bringing a lawsuit for those damages would normally be financially prohibitive.  Therefore, the case will be pursued through a class action lawsuit, which will allow all those harmed from the incident to be able to bring their claims together in a single lawsuit.  A number of the businesses and residents of the area have retained the law firm of Brent Coon and Associates (BCA) to handle this matter, and the class action suit was filed with the Orange County State District Court on December 29, 2020.

While the Brent Coon and Associates Law Firm has a home office in neighboring Beaumont, Texas, it also has a number of other litigation offices around the country, and has been involved in many well-known and highly publicized cases over the years involving oil spills, refinery explosions, and other catastrophic cases.  The work of the firm has resulted in Congressional and state legislative involvement to enhance safety and health considerations in the workplace.  BCA also retained the well-regarded class action specialist John Fabry and The Carlson Law Firm, based in Round Rock, as co-counsel.

"As a public policy and safety law firm, we are involved in high profile cases literally all over the world," stated Brent Coon.  “It is refreshing to be able to handle another serious legal matter right here in our own backyard.  We coincidentally found ourselves back in Orange County just a few months ago as one of the lead counsel firms on the TPC explosion case in Port Neches, which was transferred from Jefferson County to Orange Texas by the Texas Supreme Court.  I grew up about 10 miles from where this derailment took place, so I am very familiar with how a derailment in this area would impact the local community.  This is primarily a hard- working blue-collar area and a few thousand dollars in losses to area residents and business owners is a very serious amount in each of their pocketbooks.  It is admirable that some of the clients were willing to step out front and be the class representatives in this case, and hopefully we will be able to work with KCS to reach an amicable resolution to the case soon,"  says Coon, lead counsel on the case.

Attorney John Fabry added, “The Class Action is a legal tool to help level the playing field between the individual and a large corporation such as KCS. These actions provide a more efficient way for the judicial system to conduct litigation for similarly situated individuals, eliminating the need to relitigate common issues in a large number of individual cases. The effectiveness of Class Actions in helping individuals to hold large corporations accountable for their conduct is probably why they have been under almost constant attack by business interests.”

“At this unique time when most Americans are facing grave health and financial insecurity due to the global pandemic, the negligent conduct of Kansas City Southern makes the situation worse for the residents of Orange, Texas.

Brent Coon concluded, "At the end of the day, as a public policy law firm, we hope to not only achieve fair restitution to those impacted from the derailment, but to reduce the risk of similar incidents in the future.  Many of these derailments occur because the railroad companies do not adequately maintain the tracks. Over 10,000 derailments of some form occur annually, the majority of them associated to maintenance and budgetary issues within the railroad industry.  While it is bad enough for a load of grain to spill in a derailment in an isolated farming area, this region services the petro-chemical industry, and a tremendous amount of highly toxic and explosive chemicals are transported every day in and out of local ports, plants, and terminals.  We will push the Federal Railroad Administration to improve scrutiny and inspection of these high risk zones to reduce the likelihood of future mishaps like this, as some could have widespread and fatal consequences.  In this case, the monoethanolamine (MEA) that spilled in the derailment of some of the tank cars is a known toxin, and long term effects have not been conclusively studied.  A full cleanup, decontamination, and remediation of the impacted areas is a very important step in re-establishing a safe environment to that area, and stricter oversight would reduce the risk of future incidents."