Despite efforts by local elected leaders to postpone evictions through late August, judges have moved ahead with their eviction dockets. 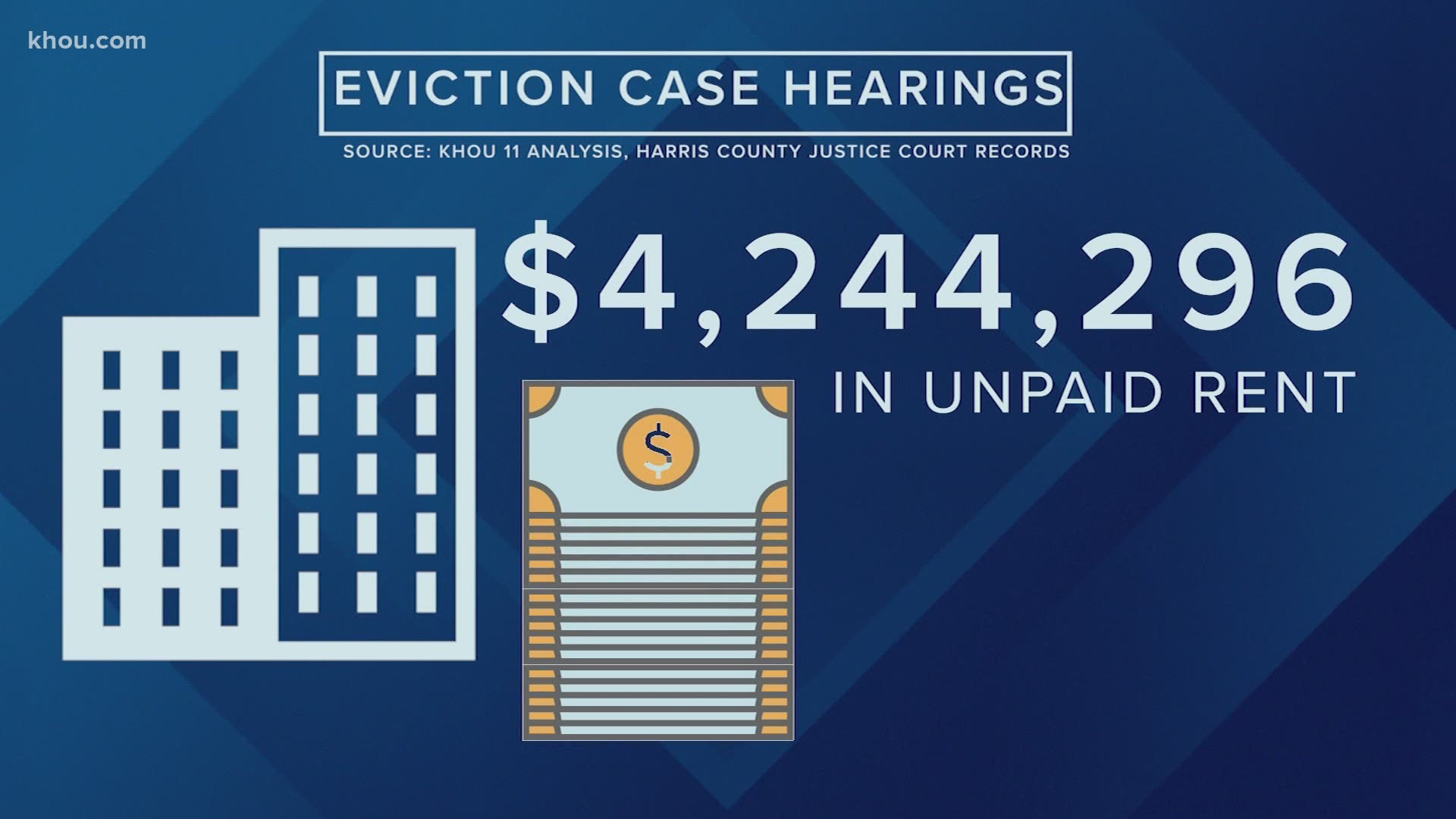 HARRIS COUNTY, Texas — More than 2,000 eviction cases are moving forward in Harris County, despite calls from local elected leaders to further delay them in court as the novel coronavirus pandemic wears on.

KHOU 11 Investigates analyzed cases in the 16 Harris County Justice of the Peace courts filed since March 19, when the Texas Supreme Court first halted eviction hearings due to the coronavirus pandemic. The state’s high court lifted the ban two months later, giving judges the green light to proceed with their eviction dockets.

Judges have since awarded $637,500 in judgments to landlords in 387 cases filed during the shutdown.

Another 2,188 hearings are scheduled in the coming weeks, with landlords seeking $4,244,296 in unpaid rent, according to the KHOU 11 Investigates analysis of court records.

Helena Morgan received an eviction notice from her Greenspoint apartment complex demanding $1,600 in back rent. The 49-year-old certified nurse aide said she lost her job at a nursing home two months ago.

She added that she recently had to pawn her late mother’s jewelry to pay the electric bill.

Morgan said she applied for the city’s rental assistance program last month but that money dried up in less than two hours. She’ll try again next week for Harris County’s Relief Fund.

The letter also attached an opinion from the Harris County Attorney’s Office, which argued that the Texas Supreme Court’s order permitted the resumption of eviction proceedings, but did not require judges to do so.

“It’s a crisis, it’s a fire, you’ve got to put it out,” Hidalgo said. “Right now, we can’t afford as a community to have away with people thrown out on the streets.”

Despite the efforts by local elected leaders, judges have moved ahead with their eviction dockets.

“Of course, it was a tough decision because I know what the virus has done to the community,” said Judge Sharon Burney, Harris County Justice of the Peace for Precinct 7, Place 2.

Burney said she has an obligation to process all cases that are filed in her court, and both tenants and landlords have due-process rights.

“And you know I must be impartial when I’m on the bench to both,” she said.

Jude David Patronella, Harris County Justice of the Peace for Precinct 1, Place 2,  said he has tried to work eviction cases “compassionately” within the framework of the law.

But another judge scoffed at local elected officials trying to meddle with their judicial oath.

“That oath does not allow me to pick and choose which cases I rule on,” said Judge Laryssa Korduba, Harris County Justice of the Peace for Precinct 4, Place 2. “Judges cannot and should not be influenced or coerced by other elected officials to betray the oath.”

Helena Morgan’s case wound up in Korduba’s court. Her court date is in three weeks.

“I think they need to give us time,” she said. “Give us time to at least get back to work and get a paycheck.”