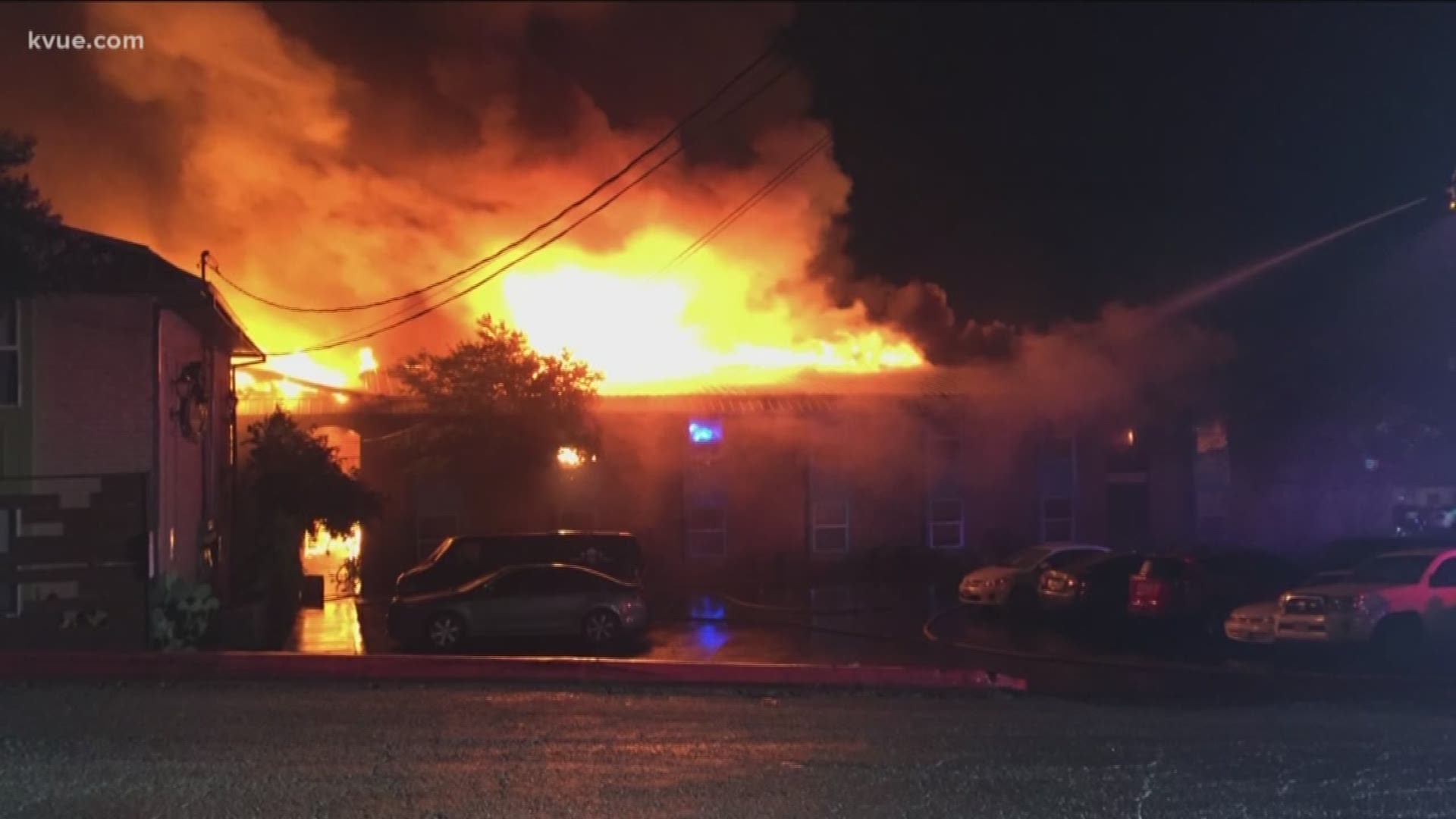 SAN MARCOS, Texas — Your life may be at greater risk depending on where you live.

After the fire, we learned that if the complex had fire sprinklers, the deaths may have been prevented.

Fire sprinklers are designed to slow down or stop a fire before it gets out of control. Iconic Village didn’t have fire sprinklers, in part because they weren’t required when the complex was built in 1970.

The KVUE Defenders found thousands more apartment buildings in Central Texas also don’t have them, either.

“I can’t really get around that easy,” said Ben Muñoz, who survived the fire at Iconic Village.

Ben’s ankle is broken. He jumped from his second-story apartment during the fire.

He and his fiancé, Abil “April” Cardenas, said they are still traumatized by what happened.

“I still have a little bit of anxiety about just places like that I don't know how to get out of, how I'd be able to get out easily with like my scooter,” said Muñoz.

Five people, all students, died in the fire:

200 others lost their homes and belongings.

“Interesting talking to some of the other people that were in the fire too, they have that same kind of like,” said Muñoz. “I can't do tall buildings.“

“I find myself sensitive to sound, even temperature in the room,” said Cardenas. “I found myself looking at the ceiling and saying, 'OK, there's sprinklers.'”

Fire sprinklers offer protection better than anything else.

According to the National Fire Protection Association, you’re 81 percent more likely to survive a fire if where you live has fire sprinklers, and injuries are reduced by 31 percent.

“It could literally be the difference between surviving a fire and not,” said Jeffery Shapiro, fire safety engineer and president of the International Code Consultants.

Shapiro said his last research showed there has never been a fire-related fatality in a multifamily occupancy in Texas where fire sprinklers were present.

“Buildings without fire sprinkler systems are definitely not as safe as buildings that have them,” said Shapiro.

Both University of Texas and Texas State Housing and Safety leaders agree. 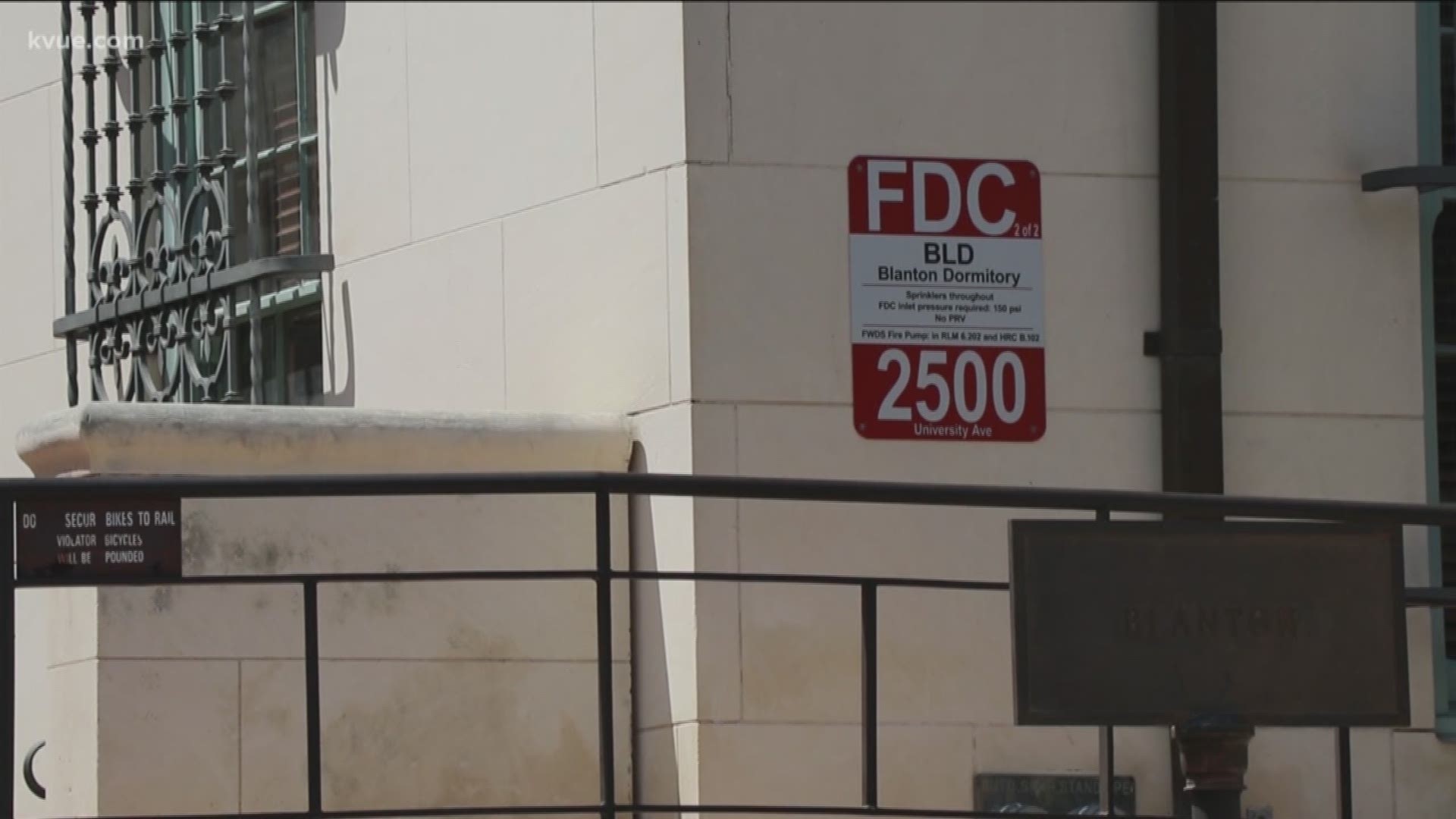 “Every year, we do between $3 and $5 million worth of work,” said Jimmy Johnson, assistant vice president for Campus Safety for the University of Texas.

In San Marcos, 15 of the 22 on-campus housing sites for Texas State have sprinklers.

One residence hall is under renovation now, and Texas State Housing managers said they will have sprinklers in all dorms within the next five years.

“It’s very expensive but it's something that we have committed to,” said Dr. Rosanne Proite, director of Department of Housing and Residential Life for Texas State in San Marcos.

Expense is one reason some oppose widespread regulation, even though thousands of students live in large, older buildings off campus.

Shapiro warns the cost to retrofit, possibly in the millions, could be passed down to renters.

“It is very difficult to retrofit a fire sprinkler system into an existing building,” said Shapiro. “You have to balance the need for affordable housing and safety.”

One regulation for sprinklers came in 2003 when federal code made all new apartment construction require sprinklers.

Some cities have their own even tighter rules.

Many local complexes are not equipped with fire sprinklers

The KVUE Defenders found six of the seven largest cities have an inventory of complexes labeling if those complexes have fire sprinklers:

San Marcos Fire Marshal Kelly Kistner said they’re now building a list. It should be complete by the end of November.

The inspectors record every detail of the property needed to respond and fight a fire.

“It gives us a good heads up to come out here and find out what kind of system they have and where the panels are located because, as we talked about earlier, seconds count,” said Kirk-Valez.

Any complex without fire sprinklers will be considered a high fire risk. A high-risk complex will get inspected each year.

San Marcos fire inspectors last checked iconic village in 2014. And that 2014 city inspection also noted the complex needed smoke alarms on every floor, bedroom and access to the bedroom, which was corrected months later.

'We are the survivors': San Marcos fire victim saves guitar during leap of faith

“Two years and there was one inspection, and it was just the maintenance guy coming in. He just beeped it once and left. He only did one of our three alarms,” said Muñoz.

The night of the fire, Muñoz and Cardenas said they awoke to screams, not warnings.

Smoke billowed across their ceiling. Ben described it as “a wall” at his doorway.

“They didn't start going off until we had already, like, gotten to the window to open it to jump out,” said Muñoz.

Iconic village and its owners, San Marcos Green Investors LLC, face several lawsuits filed by the families who lost loved ones and by others injured.

The lawsuits claim several failures by Iconic Village and its owners including: failed to implement adequate safety protocols and failed to provide fire sprinkler systems.

We reached out to the owners. They wouldn’t comment to the KVUE Defenders due to the litigation.

But in their court filings show the defendants give a “general denial” of allegations and claim no wrongdoing.

As for Muñoz, he’s still never seen what was left of his apartment.

“I think that's the thing that hurts the most is I can't even look through the wreckage of our lives,” he said.

If you have a story idea for the Defenders, email us defenders@kvue.com