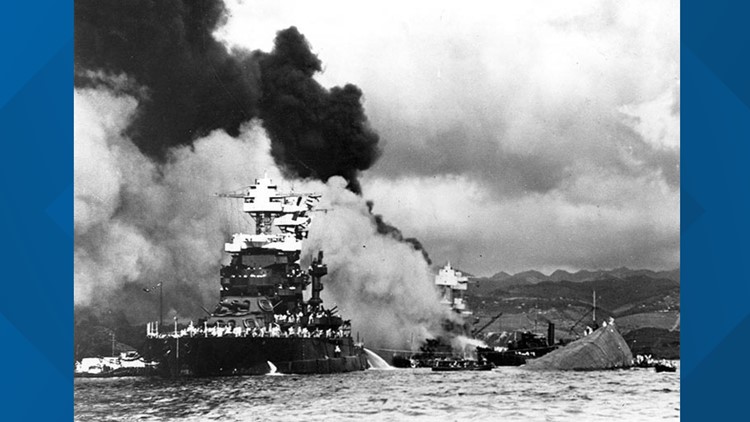 Photo by: Records of Joint Committees of Congress
Dec. 7, 1941: Capsized USS Oklahoma next to the slightly damaged USS Maryland.

PEARL HARBOR, Hawaii — *Editor's Note: This story was originally published in July 2019 and has been updated to reflect Laurie's burial and the number of unknowns identified.

Johnnie C. Laurie from Bessemer, Alabama joined the US Navy in 1938. It took him more than 80 years to return home.

On December 7, 1941, the Japanese attacked America's Navy at Pearl Harbor. More than 2,400 people, including sailors, soldiers, marines and civilians, were killed. The attack targeted airfields and battleships anchored in the harbor. One of those ships sunk, the USS Arizona, remains on the floor of the harbor, a sobering memorial to those lost on the "date that will live in infamy."

The USS Oklahoma was also anchored off the harbor. She was hit by as many as nine torpedoes in the attack while the men station aboard the Oklahoma valiantly fought back against the waves of Japanese Zeros. The ship capsized, leaving several men trapped within her hull.

Rescue efforts aboard the capsized USS Oklahoma. The USS Maryland is on the right side of the picture.
National Archives, U.S. Dept. of the Navy

The survivors kept up fight, many going aboard the USS Maryland, which was moored next to the Oklahoma.

In the days after the attack, rescuers could hear pounding from the men trapped inside the hull of the Oklahoma. Several men were rescued from the ship's hull. However, the pounding grew silent as the men still trapped inside perished. In all, 429 sailors and marines stationed aboard the USS Oklahoma, including Mess Attendant First Class Johnnie C. Laurie, died in the attack.

The Oklahoma was eventually pulled from the harbor and remains of those killed on the ship were buried in two different in Hawaii.

The Navy ruled that the ship could not be salvaged. She was decommissioned and later stripped of its guns and superstructure. In 1947, what remained of the Oklahoma was sold to a scrapyard in San Francisco.

However, during her trip from Hawaii to the scrapyard, a storm forced the tugboats towing the ship to drop their tow lines, and the USS Oklahoma quickly sank into the sea. To this day, her exact location is unknown.

According to the Defense POW/MIA Accounting Agency, in September 1947, the American Graves Registration Service disinterred the remains of the fallen sailors aboard the Oklahoma in the first of many attempts over the years to identify the bodies.

Sadly, only 35 were identified. The others were placed in 62 caskets and laid to rest in 46 plots in the National Memorial Cemetery of the Pacific in Honolulu. The plots became known as the Oklahoma Unknowns Punchbowl.

In 2003, one of the 62 caskets in the Punchbowl was disinterred. Five of the remains inside the casket were identified by 2010. The remains of a sixth sailor aboard the Oklahoma, who was found in the waters of Pearl Harbor and buried individually, was identified in 2007.

In 2015, the remaining unidentified victims of the Oklahoma were disinterred in an effort to finally identify those killed in the attack using DNA. The last of the caskets were removed from the Punchbowl in November 2015.

U.S. service members from the Defense POW/MIA Accounting Agency (DPAA) participate in a disinterment ceremony, Nov. 9, 2015.
Department of the Defense

“As important as it is to return the fallen to their families, it’s equally if not more important to the nation,” Brigadier General Mark Spindler, DPAA deputy director, said in 2015. “This is our sacred promise that we make to our sons and daughters when we put them in harm’s way and ask them to do the most difficult tasks around.”

At the laboratory where the test is taking place is a wall of nearly 400 posters, each representing a sailor or marine lost on the Oklahoma on Dec. 7. Each time a victim is identified, a rosette is placed next to the person's name on the Walls of the Missing at the Punchbowl.

“When we are working on a loss, we work in the blind, which is to say we don’t have any information about that person in order to avoid biasing our analyses,” Dr. Carrie Brown, who leads the DPAA USS Oklahoma project, said. "If you look around our workspaces, you will see many photographs hanging at our desks; these represent cases we have personally worked on.  These photographs, along with those on the posters, serve as poignant reminders of who these men were."

The agency announced on July 15 Navy Mess Attendant 1st Class Johnnie C. Laurie. His identity was confirmed on July 2. Keeping with tradition, a rosette was placed next to his name.

Laurie was returned to his home state of Alabama and buried in Alabama National Cemetery in Alabama.

For more information on the USS Oklahoma project, you can visit the Defense POW/MIA Accounting Agency's website.